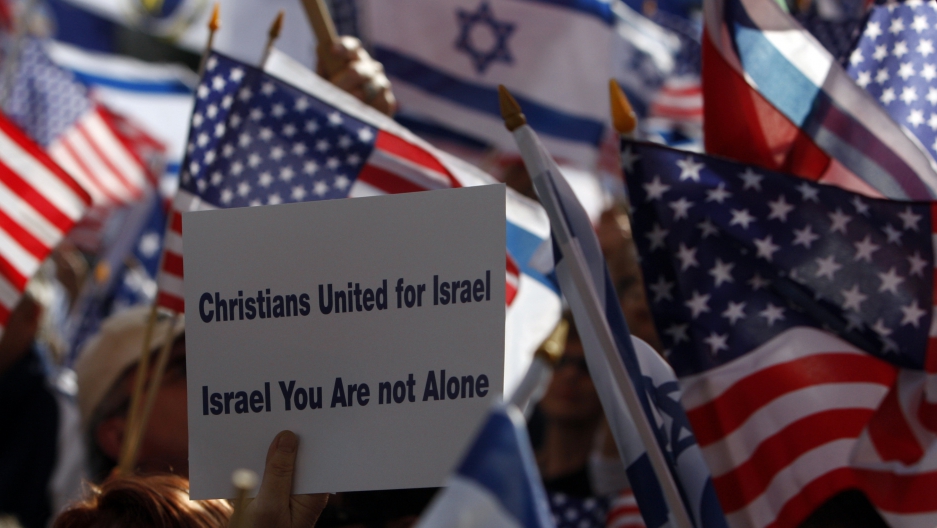 Christian demonstrators, members of "Christians United for Israel" organization, carry flags during a march to show solidarity with Israel, in Jerusalem April 7, 2008.

However the election in November turns out, there is one certainly: Support for Israel will remain strong in both Congress and the White House.

“Supporting Israel is not a political issue ... it is a bible issue,” pastor John Hagee, the founder and national chairman of Christians United for Israel, said in a speech last year.

Hagee, who heads the massive Cornerstone Church in San Antonio, founded Christians United for Israel a decade ago. It steadily became one of the strongest pro-Israel evangelical groups in the country, with more than three million members and 14 regional directors to help steer operations in different parts of the country.

The group’s organizational prowess is visible at its annual Washington Summit, where attendees do more than just listen to speeches.

“Every group goes to every senator and every congressman with the same talking points about things we want them to be concerned about in relationship to Israel,” Hagee explained in a Facebook video published in September. “And I can assure you that the strength of what we do has caused a political earthquake in Washington from time to time.”

Hagee’s talk was indicative of the group’s message. He expressed frustration that, from his perspective, the Obama administration was more focused on improving ties with America and Israel’s enemies in the Middle East than on Israel’s security, and that it blamed Israel more than the Palestinians for the failure of the peace process.

“My question to Washington is when are the Palestinians going to be asked to make a sacrifice for peace? Why does it always have to be Israel?” he asked.

For some, the power of organizations like Christians United for Israel to influence US foreign policy is outsized. But that influence wouldn’t exist without a receptive audience.

Evangelical Christians make up the biggest pro-Israel bloc in the US. Support for Israel is stronger among American evangelicals than it is even among American Jews. According to a poll conducted by the Pew Research Center, 82 percent of white evangelicals think God gave Israel to the Jewish people. Less than half as many Jewish Americans or Catholic Americans agree.

And according to a Bloomberg poll, almost 60 percent of evangelicals say the US should support Israel even if its interests diverge with American interests.

As Hagee noted in his speech, some of the basis for this support is theological. Darrell Bock, a Bible scholar and professor at the Dallas Theological Seminary, believes evangelical support for Israel is largely rooted in the belief that God makes good on his promises.

“It looks back to the idea that God has made certain commitments to his people — to the people through whom the gospel originally came — and he’s not abandoning them, ultimately. And so there’s a hope that drives this belief that Israel deserves to be supported,” he said.

These beliefs are both deeply held, and widespread. Depending on how you define it, about one in four Americans are evangelicals. Richard Land is president of the Southern Evangelical Seminary near Charlotte, North Carolina. Like many of his faith, he was raised in a tradition that believed that the Jews are God’s chosen people, and that “God gave the land of Israel to the Jews, forever. And that God blesses those who bless the Jews, and God curses those who curse the Jews. And if we want God to bless us and God wants us to bless America, we’ve got to bless the Jews.”

There are other Biblical and more future-oriented reasons that some evangelicals support Israel — specifically the “prophecy that Israel has a major role to play at the end of days. This idea was popularized in the Left Behind book series, which sold tens of millions of copies and was adapted into a film series starring Kirk Cameron in 2001, and rebooted in 2014 with Nicolas Cage.

In one decisive moment in the apocalyptic series, The Battle of Armageddon, the “antichrist” gathers all the world’s armies to attack the last remaining Christians and Jews in Israel, before Christ himself intervenes to destroy the invading army.

The movie wasn’t well received by critics, and many evangelical leaders objected to it on theological grounds.

“To take this popularized Apocalyptic end times view as the norm is a huge mistake. It's absolutely not, and most evangelicals don't share it,” says Robert Nicholson, executive director of Philos Project, a nonprofit working to promote positive Christian engagement in the Middle East. ”There are evangelicals who think some of those things, but they're an absolute minority.”

While support for Israel is strong, there are some signs of growing sympathy of Palestinians as well. Bock, of the Dallas Theological Seminary, notes that this seems particularly true among younger evangelicals.

“What drives a millennial are justice questions — and there are real questions related to justice and how Israel handles the Palestinians. Of course, the flipside of this is that there are real problems of security that Israel has to cope with so Israel is a very tangled web,” he said.

Another factor, according to Richard Land, the head of the Southern Evangelical Seminary, is that since the intifadas in the 1990s, more Palestinian Christians have come to the US, “so a lot more evangelical Christians know Palestinians than was the case 20 years ago because they're their neighbors, they're their fellow church members,” he says.

And there are signs that this shift has led to the development of new types of evangelical political organizing on the Israeli/Palestinian issue. The Telos Group, for instance, is a faith-based American nonprofit focused on what it calls “pro-Israeli, pro-Palestinian, pro-peace” solutions.

It was co-founded by Todd Deatherage, who was raised an evangelical, and worked in Republican politics before helping to start the group in 2009.

But for now, at least, the shift seems to be a small one. In 2013, a Pew Research poll found that 72 percent of white evangelicals said they felt more sympathy for Israelis than Palestinians. There are tens of millions of American evangelicals, with a range of views, but the core is still solidly on the side of Israel.