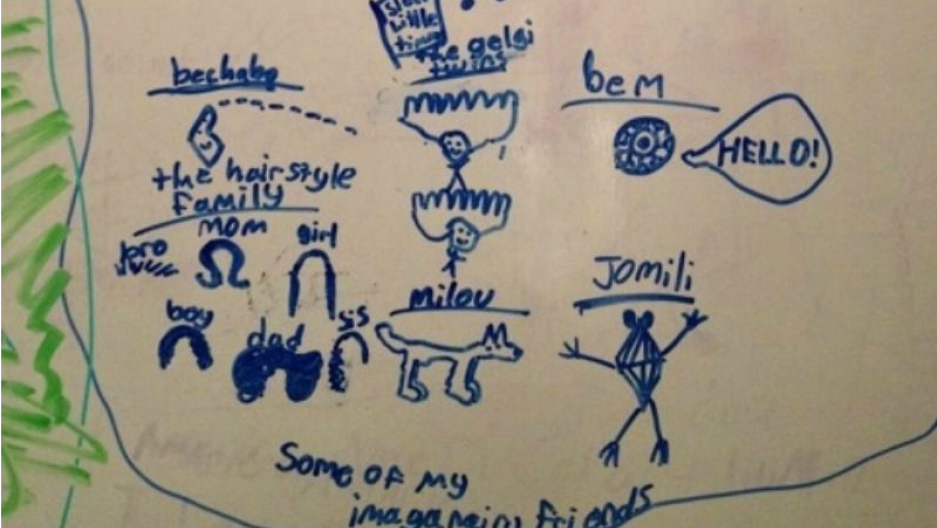 Lots of kids have imaginary friends --- a young Kurt Andersen had a gaggle including Robbie Dobbie, Crackerpin, Jimmy the Cat, a poodle called Genevieve. Marjorie Taylor, a psychology professor at the University of Oregon, has been looking at imaginary friends and the children who have them. "They tend to be more social, less shy, and do better on tasks which require you to take the perspective of another person in real life. We have found that they are more creative on some kinds of tasks. Other people have found that their narratives are richer."

Taylor is exploring the idea that these children are more creative --- in particular, the kids who build a paracosm, a country or place for their friends "where children think about all kinds of things like entertainment, the food, the clothes, the transportation, the money."

Maxine, who is eight years old, walks us through her paracosm and the friends in it. Some are a little creepy, like Devil Man and Betchaboo, who takes the shape of a gun, but they're not frightening to her. "They're not the kind of people who will go and kill people. They're not like gangsters, they're just tricksters." Besides, Maxine says, if imaginary friends caused trouble, "then they would be deleted. Because then you don't exist. Sometimes when I forget about them they die, but they're not deleted." When you imagine the world, you get to set the rules.

Original music for this story was composed byJason Cady.

Readmoreabout the research conducted by Marjorie Taylor, Jacob Levernier, and Candice Mottweiler at the University of Oregon