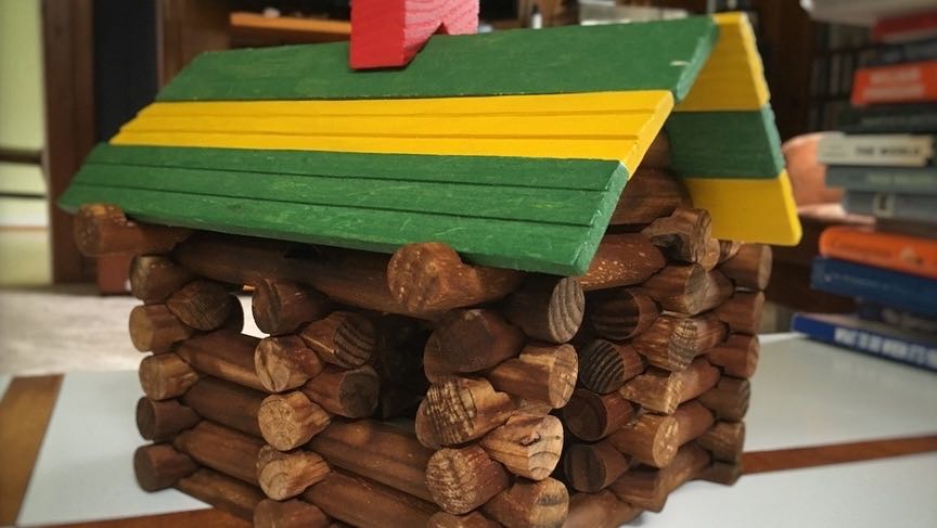 The author used her Lincoln Logs to build a nostalgic sort of "little house on the prairie"/coffee table.

I was seized recently by a desire to play with Lincoln Logs. It wasn’t the first time. I periodically think longingly about those thin, notched redwood "logs." I used to spend hours as a kid stacking them into cabins and houses.

The other day, I actually went out and bought myself a set. They are recommended for children ages 3 years and up. OK, so I’m way, way up, but who’s counting.

My brother’s Romanian girlfriend may have grown up with dolls she made out of acorns; her only toys during the Ceausescu years. But I was a spoiled suburban American kid building "little houses on the prairie" of the living room coffee table.

Lincoln Logs could not be a more American toy. Diminutive wooden logs that conjure the Wild West, Manifest Destiny and the infinite possibility of the land that is an intractable part of our country’s mythology. But, in spite of my childhood full of quintessentially American toys, like Lincoln Logs and Fisher Price barns, playthings also opened my mind to the big vast world and to people who lived their lives differently from me.

Now, your memories of early trips abroad might have to do with tours of the castles and other guidebook sites from a class trip. Or perhaps it was that backpacking trip across Europe after high school, where the sightseeing involved more bars than historical sites.

For me, my early travel memories mostly center around toys.

Take the soft, fuzzy rabbit my mother told me not to pack on a trip to Venezuela, warning that it might be cut open at customs. I brought the rabbit anyway, and she brought a sewing kit just in case. The bunny survived our time there, unharmed, and currently, it resides in a box in my closet. But other toys I took with me on that trip met a different fate: My plastic horses and Matchbox cars would mysteriously disappear, one by one, each time someone came to clean our rooms. I returned home light on toys, but heavily burdened by what I learned about poverty. To this day, I hope there is a 40-something person out there whose life in the Caracas slums was made just a little bit better, all those decades ago, by the small toys I never saw again.

Next, you may well remember the Netherlands for Anne Frank or various activities that are mostly illegal in the States. The Netherlands is where my brother, cousin and his Dutch stepdad, and I somehow came up with the idea to blow out the insides of eggs, sending the gooey liquid flying through pinholes that we'd poked in the shells. I’m not sure how many eggs we destroyed in the process, but I remember my aunt was beyond furious. Somehow, we even succeeded in attaching battery-powered torpedoes to three eggs. Then we ran down the stairs from the flat and out to the canals. The eggs and torpedoes were launched and never seen again. But, the memories of playing war games in the canals linger on when little else from that visit does.

Zipping over to Paris. Paris might be the City of Lights for you, the backdrop to your first teenaged kiss. In my mind, Paris is the City of Meko Miko Monkey Wine. Stay with me. My younger brother and I had these tiny toy monkeys on the trip. In Paris, we had dinner with some relatives. Dessert was ice cream served in imitation Champagne bottles, which came apart in the middle, like a plastic Easter egg. We each had our own bottle filled with really boozy ice cream. Really, really, boozy ice cream. Particularly boozy for an 11-year-old and an 8-year-old. Hey, it was Paris. It was the '70s. OK?

When we finished the ice cream, and the bottles were rinsed out, we stuffed the toy monkeys into the containers. And we two drunk children went out onto the streets of Paris singing a silly, surreal song we had just made up — riffing off the label, which read "Meko Miko," or something like that. A ditty inspired by monkeys and Paris and plastic bottles and boozy ice cream. It was an early introduction to the Paris of the Lost Generation. Maybe too early. But, I can never read about Ernest Hemingway’s or F. Scott Fitzgerald’s or Gertrude Stein’s Paris years without our Meko Miko Monkey wine song echoing in my brain.

Each of my travels with toys left a mark. Because toys are more than just a game. Toys give you a window into yourself, the culture you are playing in and the world you are growing up a part of.

While toys helped me imagine other ways of life, I eventually returned to where I started. I became a person who longs to saddle up a horse from the big red Fisher Price barn and head out to the open prairie where I’ll build myself a Lincoln Log cabin and never return.

I’ll never know if I chose my childhood toys and games because of who I am or whether the ones I chose made me who I became. But, I still wonder if I would have played with different toys or packed different ones on all those trips, whether, as an adult, I would have ended up somewhere else.