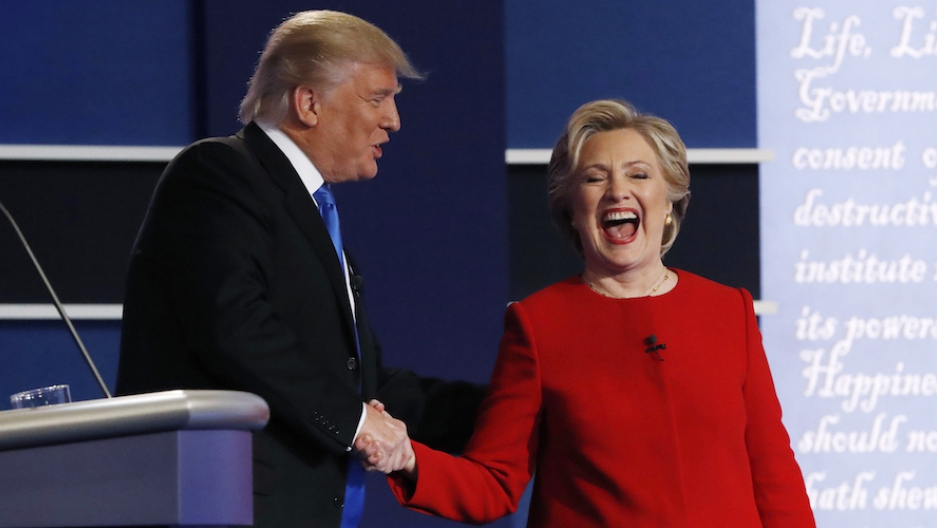 Donald Trump headed into a crucial debate with Democrat Hillary Clinton Sunday with his White House hopes in peril and the Republican party in chaos over his lewd boasts about groping women.

With the US election less than a month away, Republican lawmakers and governors abandoned Trump in droves, despite a rare televised apology by the candidate, whose sexually aggressive remarks were caught on a live mike in 2005.

Trump himself was defiant, tweeting: "So many self-righteous hypocrites. Watch their poll numbers — and elections — go down!"

Mike Pence, Trump's running mate, also suspended his campaign appearances after declaring on Saturday that he did not condone and "cannot defend" the Republican standard-bearer.

The scandal — just the latest involving his treatment of women — could not come at a worse time for Trump, who has taken a beating in the polls since his sloppy performance in the first presidential debate Sept. 29.

An average of national polls compiled by RealClearPolitics.com has Clinton in the lead by 4.5 percentage points.

National media, meanwhile, have dug up Trump's past behavior, including his agreeing with Howard Stern that his daughter Ivanka Trump was a "piece of ass." In the 2002 interview with Stern, Trump also said he preferred leaving women over a certain age.

Debate with a twist

The two candidates face off starting at 9 p.m. (Eastern) at Washington University in St. Louis, with the added twist that this time they will take questions from the audience in a town hall-style forum.

"He's as prepared as he's ever been and he's all ready for the debate tonight," Giuliani said on NBC's Meet the Press.

"He obviously, you know, feels very bad about what he's said. He apologized for it, will probably do it again. What he'd like to do is move onto the issues that are facing the American people."

How much the "elephant in the room," as Republican House speaker Paul Ryan referred to the tape on Saturday, dominates the debate is an open question.

Giuliani warned that Trump could well go after Clinton's past marital troubles with her husband Bill, the former president.

"I do believe there's a possibility he'll talk about Hillary Clinton's situation if it gets to that. I don't think he prefers to do that. But I think he will."

Tim Kaine, Clinton's running mate, suggested that while audience members would have questions about Trump's treatment of women, the former secretary of state intended to stick to basic issues like the economy and national security.

"If Donald wants to talk about something other than what voters want to talk about, that's his choice," Kaine said on CNN's State of the Union show. "But I suspect that Hillary Clinton is going to talk about the things that voters really care about."

Clinton may also have to worry about a WikiLeaks disclosure of excerpts from private speeches she gave to major banks in 2013 and 2014.

Although overshadowed by the Trump tape, they show she expressed views in favor of open trade and Wall Street self-regulation to those audiences that are at odds with her positions as a candidate.

“My dream is a hemispheric common market, with open trade and open borders, some time in the future with energy that is as green and sustainable as we can get it, powering growth and opportunity for every person in the hemisphere,” Clinton allegedly said in remarks to Brazil's Banco Itau in 2013.

John Podesta, a Clinton adviser from whose email account the excerpts were hacked, insisted they were taken out of context.

"They are not diametrically opposed," he said on Fox News Sunday. "Again, you can pull a few words out of context, but what he said on this campaign trail is she'll be tough on Wall Street. That's exactly what she'll do."

Even a winning performance by Trump, however, seems unlikely to mend the deep breach he has opened in the Republican party, alarmed about the scandal's fallout in other down-ballot races.

Notable defectors included Senator John McCain, the 2008 Republican nominee, who said Trump's "demeaning comments about women and his boasts about sexual assaults, make it impossible to continue to offer even conditional support for his candidacy.”

The New York Times reported that by late Saturday 36 Republican members of Congress and governors had disavowed Trump's candidacy.

Some leading Republicans called on Trump to quit the race, but he vowed he would never do that and legal experts said removing him from the top of the ticket would be extremely difficult.

Trump predicted Saturday that the controversy would blow over.

"I think a lot of people underestimate how loyal my supporters are," he told the Times.

Correction: A previous version of this story misspelled the last name Priebus. It has been corrected.