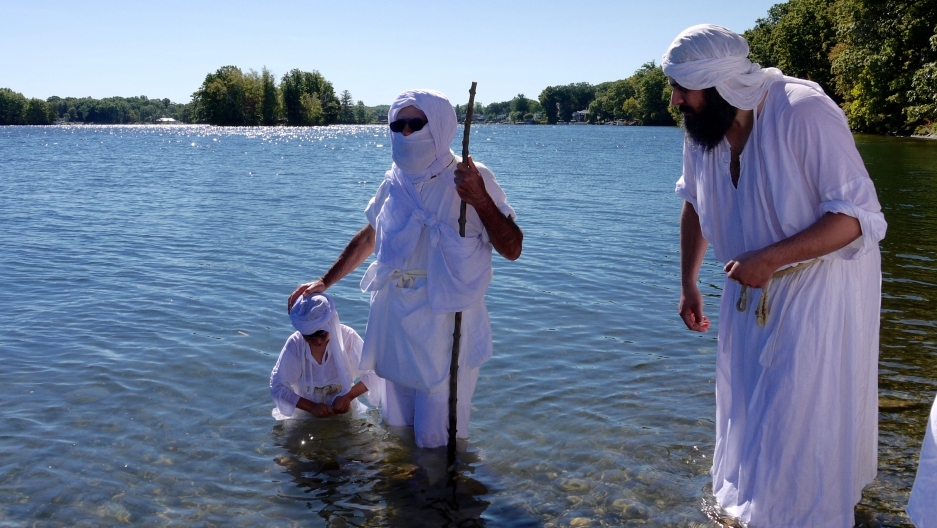 Sheikh Salah (center) is baptizing one of several dozen Mandaeans at Lake Quinsigamond in Worcester, Massachusetts, on Sept. 25, 2016.

On a recent Sunday morning, several dozen people wrapped in pristine white cotton robes lined up on the shoreline of Lake Quinsigamond. They came to be baptized, but they’re not Christians.

They are Mandaeans, members of a tiny religious minority with theological roots in Jerusalem and ancient Babylon.

“We baptize when we’re born, before marriage, after marriage and also in between a lot,” said Noor Roomi, a physician from Concord who grew up in Iraq. Roomi has been baptized many times over the years. She said the ritual gives her a sense of purification.

“You feel that you are near God. It is a holy thing,” she said. “It’s a beautiful feeling.” 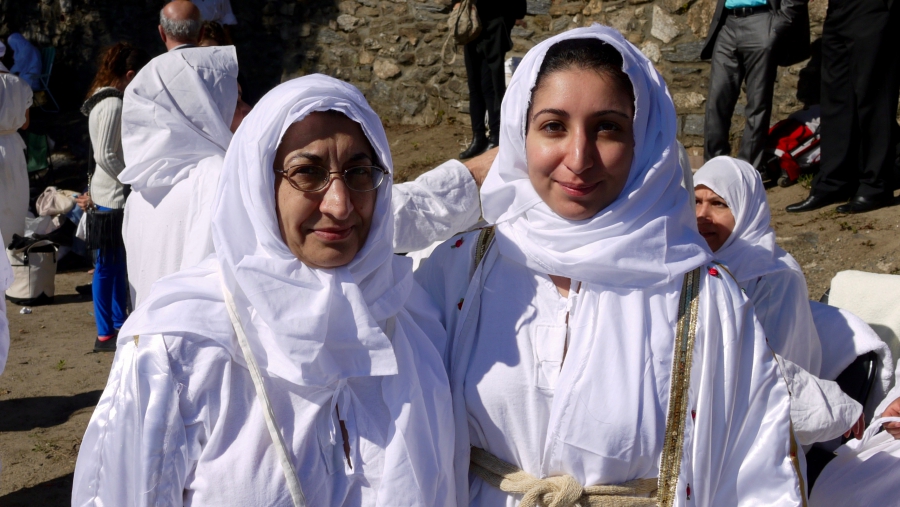 Noor Roomi (left) and her daughter Rand Nashi, both born in Iraq, were not going to miss an opportunity to be baptized by the Mandaean high priest Sheikh Salah, who recently visited the city of Worcester to preside over a communal baptism with several dozen faithful.

Mandaeans are an ethnic and religious group who revere John the Baptist, along with other Biblical figures including Adam and Noah. The language of their faith is Aramaic, the same language spoken by Jesus of Nazareth. But as a people, they spent most of their history in southern Iraq.

Only about 60,000 Mandaeans are living around the world today. The community in and around Worcester has grown to about 2,500 in the last 15 or so years. And its members are striving to keep their religious traditions alive.

The man presiding over this daylong ritual was a high-ranking priest named Sheikh Salah. He was born in Iran, where a small Mandaean minority lives today. Salah lives in Australia now and had flown to Boston for the weekend.

He has an old-world look: a big gray and black beard, sandals, robes and a simple wooden staff. But Salah also donned a pair of dark sunglasses for the full-day communal ritual.

Roomi’s daughter, 27-year-old Rand Nashi, is also a doctor. She came to the US from Iraq as a toddler and says she is not a particularly religious person. Still, Nashi said she jumped at the chance to be baptized alongside her mom and for the first time since she was a schoolgirl.

“This is the same way that Jesus was baptized 2,000 years ago,” Nashi said. “It’s a surreal feeling, a way of connecting to my heritage, to my ancestors and to my spirituality.” 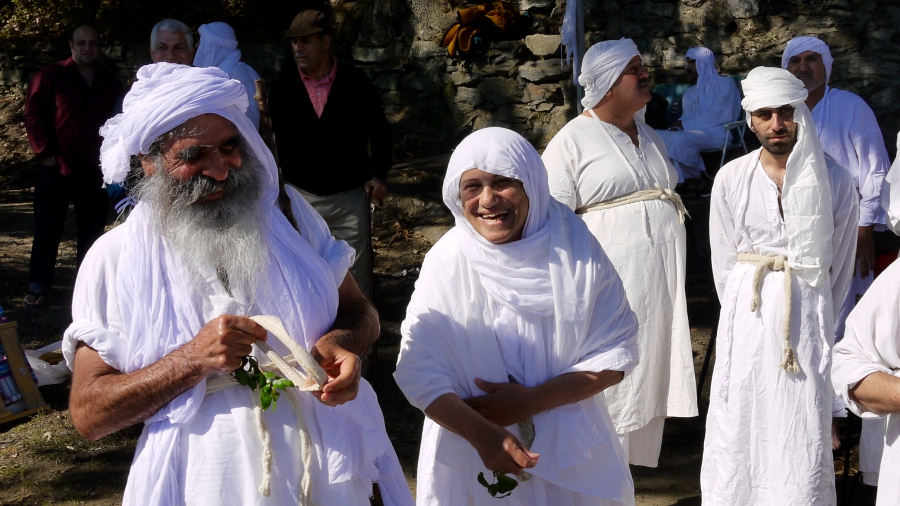 Sheikh Salah is the highest-ranking Mandaean priest in the world. He was born in Iran and emigrated to Australia.

Like Judaism and Islam, the Mandaean religion has lots of rules about diet. Alcohol and meat are generally forbidden. The religion does not allow for conversion to the faith. If a Mandaean man or woman marries someone who is not part of the religion, the couple’s children are not considered to be Mandaeans.

Mandaeans are also pacifists. Their teachings prohibit the use of violent force, even for self-defense.

Nonetheless, the Mandaean people were able to preserve their distinct religious system for centuries in the heart of the rough-and-tumble Middle East. There are a few reasons for that, says Gerard Russell, a former British diplomat who spent many years in the region.

“From the start, Islam was not so keen to spread,” says Russell, who is the author of “Heirs to Forgotten Kingdoms: Journeys Into the Disappearing Religions of the Middle East."

“The Muslim Arabs wanted an empire, but they didn’t necessarily want everybody to adopt their religion,” Russell says. “Contrary to expectations, I think there was always a constituency for tolerance.”

Over time, there were Muslim rulers and scholars who saw the existence of indigenous religions as offensive. That brought periodic waves of violence or forced conversions on peoples like the Mandaeans.

But geography afforded the Mandaeans some degree of protection. Legend has it that the Roman destruction of Jerusalem in 70 A.D. drove the Mandaeans into exile, so they settled in marshes of southern Iraq, where they were somewhat isolated from the political convulsions of the times.

The element of tolerance for minority faiths in Iraq lasted into the 20th century.

“Sometimes, groups like the Mandaeans were celebrated,” Russell says. But Iraqi politics was treacherous business under the late dictator Saddam Hussein, who was known to occasionally seek out Mandaean holy men for their ritual services — but who also cracked down hard on his perceived political enemies, which included many Mandaeans.

The situation got really bad for Iraqi Mandaeans after the US invasion in 2003. The war brought lawlessness to the country, and many Mandaean families found themselves targeted by organized crime and Islamic extremists.

“Enough powerful and violent people are keen to repress other faiths,” Russell says. “That is the dominant theme we see.”

Most of Iraq’s Mandaeans have now fled and resettled in Europe, Australia and the US.

In the Worcester, Massachusetts, area, life in general, has been good for the Mandaean community, says Sinan Abdullah, a 70-year-old dentist from a prominent Iraqi Mandaean family.

“America is like a mom. It takes you, it nurtures you, it really lifts you up if you’re a hardworking person,” Abdullah says. “I love it.” 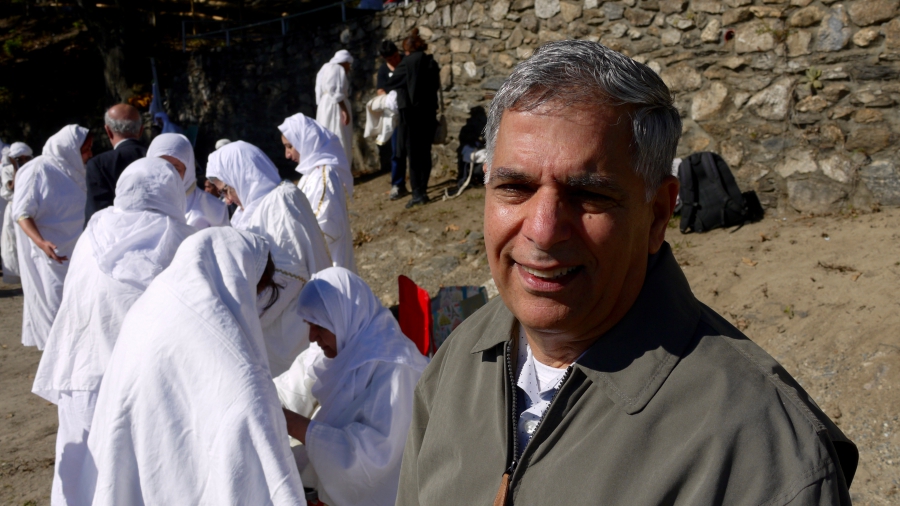 Sinan Abdullah is a dentist who describes himself as the first American-born Mandaean. He grew up in Iraq and lives near Worcester.

But Abdullah says it’s ironic that Mandaeans in the US have occasionally found themselves caught up in the current anti-Muslim mood.

“We were the first victims of the fanatic Muslims … in the past, when they first took over in Iraq,” Abdullah says. “When we come here, we take the blame of, for example, bombing of the Trade Center. What is it to us? Just because we speak Arabic?”

Abdullah says Muslims here in the United States occasionally look at Mandaeans with suspicion, too, after they realize they are fellow Arabic-speaking Middle Easterners, but not fellow Muslims.

And on this sunny Sunday morning, that is precisely what Breegi is praying for.

“The whole [Mandaean] philosophy, and the whole religion and faith and community, it’s around the mendi,” says Breegi, using the Mandaic word for temple. “It’s very important ... to have the mendi. That will make [Worcester] home.” 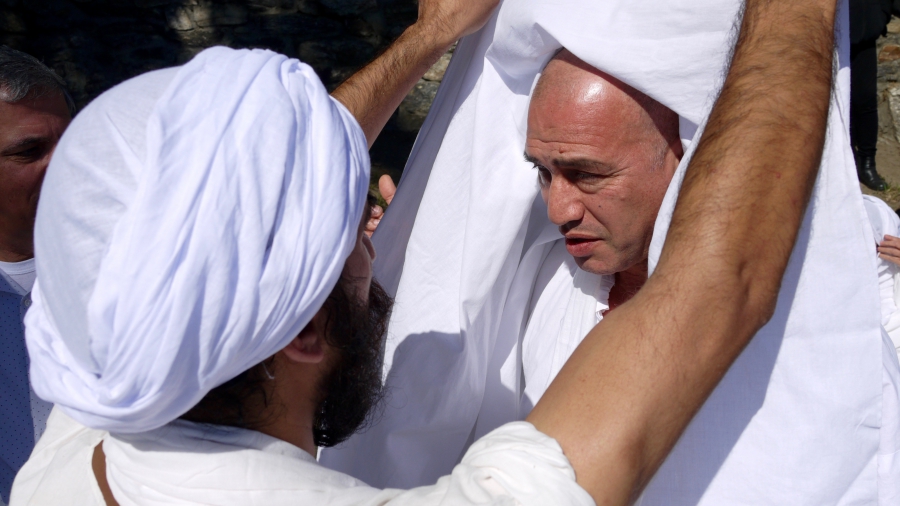 Wisam Breegi (right) prepares to be baptized by a visiting Mandaean high priest. Breegi is hoping to raise funds to build a Mandaean temple in the Worcester area.