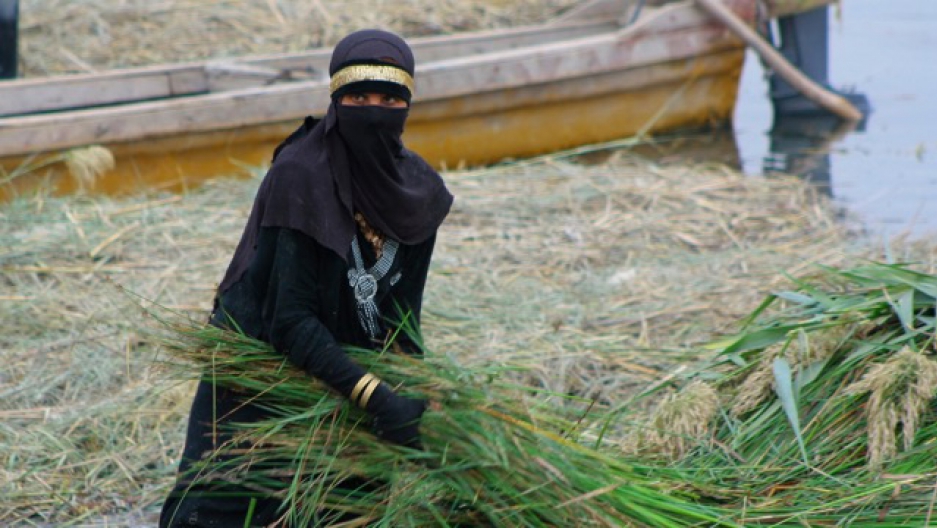 A woman in Iraq’s southern marshes gathering reeds. The flexible reeds are used to build arched reed houses in a design unchanged for thousands of years as well as burned for fuel. While men in the marshes fish, women and girls do most of the manual labor including cutting and transporting the reeds.

It’s easy to believe, when you’re in Iraq’s southern marshes, that civilization really did begin there.

Sunlight sparkles as herons dart from the reeds to spear fish, while women in long wooden boats glide through the water. The wetlands span thousands of square miles in the middle of desert. Some students of ancient history believe the marshes, lined with reeds, teeming with fish and filled with birds, are the site of the biblical Garden of Eden.

On Sunday the UN cultural agency, UNESCO, added the marshlands and the ancient Sumerian cities that once flourished among them to its list of World Heritage Sites. The listing recognizes the area’s role in human development and its unique ecosystem. It also includes three Sumerian capitals, including Ur, believed to be the birthplace of the prophet Abraham, revered by Christians, Jews and Muslims. 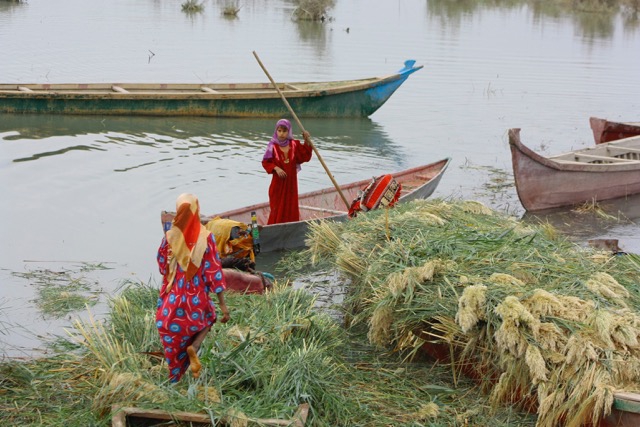 Women gather reeds in Iraq's southern marshlands. Most people have added outboard motors to the traditional boats but there are few other conveniences here. Most are without electricity and there are few schools or clinics.

This region was the heart of ancient Mesopotamia, where the world’s first known cities sprang up near the Tigris and Euphrates rivers. Sumerian clay tablets from more than 5,000 years ago portray arched houses built from reeds — the same way they are still built today.

But the marshes that survived for thousands of years have taken a beating in recent decades. Iraqi governments since the 1950s began draining parts of the marshes to expand agriculture and drill for oil. In the 1980s, at war with Iran, Saddam Hussein sped up their destruction so the marshes couldn't serve as a refuge for fighters. A decade later he punished Shiites from the south for a failed uprising by driving them from their homes there.

The marshes today remain one of the poorest areas in Iraq. Residents living on tiny floating islands fish, tend water buffalo and gather reeds. There is almost no health care and few schools.

But since Saddam was toppled in 2003, there have been efforts to restore the suffering marsh ecosystems.

Iraqi American environmentalist Azzam Alwash and Nature Iraq, the group he founded, have set up an eco-camp in the heart of the marshes. Visitors can stay in modernized reed houses, go out on boats, and eat breakfasts of water buffalo cream and flatbread baked over reed fires. The marshlands are on a main migratory bird path from Africa. With the water and fish stocks restored, pelicans, flamingoes and marbled teal ducks fill the skies.

The marshes are in one of the safer parts of Iraq, just a few hours from Basra, but there are few foreign visitors.

“We have so much potential for archeological tourism and eco tourism but unfortunately this area of development has been stunted because of the reliance on oil,” says Alwash. “It is our curse as far as I am concerned.”” 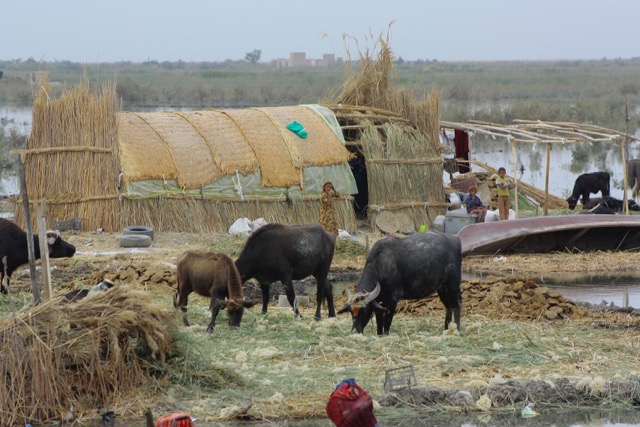 Inhabitants of the marshes - known as the Ma’dan - share the floating islands where they build reed houses with domesticated water buffalo, usually a household’s most valuable possession. Bufallo milk, a staple of the diet here, is also boiled over reed fires and turned into a thick cream to be sold.

There are still threats to the marshes — primarily from agricultural runoff as well as drought attributed to climate change. Turkey and Syria also limit water flowing into the marshes with dams upstream.

Alwash says he feels vindicated by the UNESCO listing. But he says more important than world recognition is the commitment made by the Iraqi government to protect the area.

“A few years ago, people were looking and laughing at me saying ‘why do you want to restore the marshes? These are backward people’ … and now all of a sudden people are saying ‘fantastic, marvelous.’"