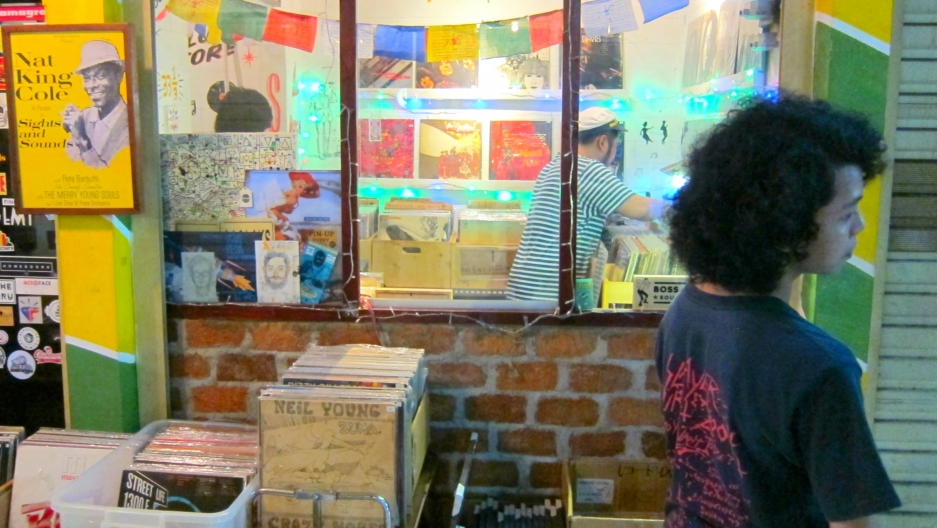 2015 marked the tenth straight year of growth for vinyl record sales in the U.S. New pressing plants are coming online, and existing ones are running around the clock to try and keep up with demand.

In Jakarta, Indonesia, vinyl is also back, but not vinyl production. The last pressing machines in the country were sold for scrap metal in the 1980s, which has made for high prices and limited supplies in the city's record shops.

On Jalan Surabaya --- which has been a hub for record vendors since the 60s --- a string of small shops still sells second-hand LPs. Over the last decade teens increasingly have been picking through the bins in search of bargain finds, but the selection is limited. The biggest challenge for shops such as Lian Records: finding more records to sell. Lian has been in the business for decades, but these days he's lucky if he acquires more than a few new records a month.

Across town at Pasar Santa, the scene is quite different. At least a dozen young record collectors, most in their 20s, have taken over the top floor of a traditional home goods and produce market. Their wares are packed into tiny stalls no more than 10 feet to a side, and most of those wares --- new and used --- are imported from overseas.

At one of those shops --- called Laid Back Blues --- classic albums by Three Dog Night, Neil Young, and Dizzy Gillespie start around 300,000 Indonesian Rupiah, about $30. New records by Indonesian bands, which are manufactured mostly in Europe or Japan, cost even more.

But most expensive are the old Indonesian records. Samson Pho, the owner of Laid Back Blues, travels around the country going to radio stations and defunct record labels, where he buys up their old stocks. He keeps the best for himself, but a few are for sale, including an original pressing of "Shake Me" by the 1970s group AKA.

Samson describes the music as "heavy heavy funk," and the price tag is also heavy: over $100. And keep in mind, this is a country where you can eat a basic meal for a dollar, and almost half the population lives on two dollars a day.

Indonesian record collectors will pay that price for the same reasons that collectors anywhere will --- for the value of a physical object, a piece of history. As one record shop owner put it: "If you have one, it's everlasting, everlasting."