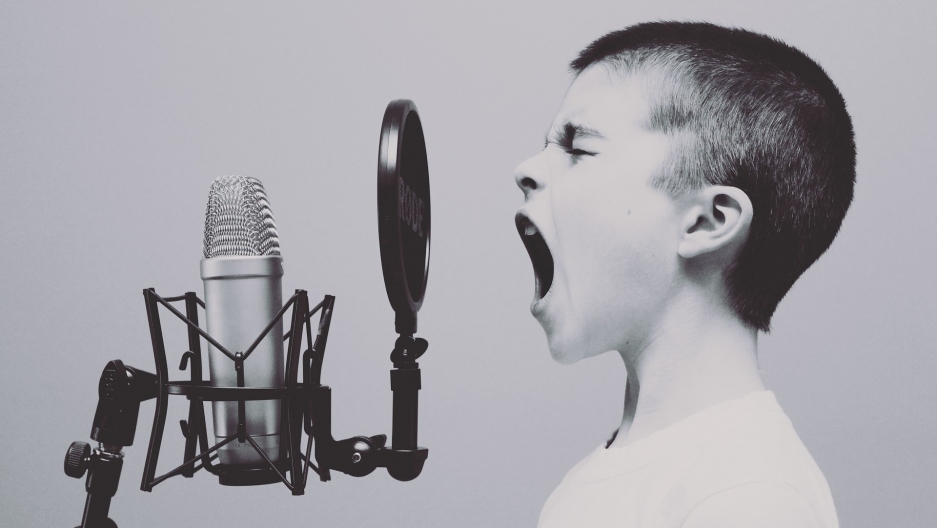 When you hear a recording of Whitney Houston belting out a classic like “I Will Always Love You,” it’s impossible to miss her raw talent and refined vocal skill. What’s amazing is that anatomically speaking, there’s no difference between Whitney Houston’s vocal system and yours.

Extraordinary singers “have the same size lungs as other people,” says Linda Carroll, a voice rehabilitation specialist. Dr. Steven Zeitels, director of the Voice Center at Massachusetts General Hospital, points out that singers’ vocal muscles are also the same size as yours — that is to say, they’re tiny. “I can place all your vocal muscles into one corner of one facial muscle,” Zeitels says.

In fact, whether we’re famous singers or not, our key voice apparatus is a little area in our larynx called the vocal folds. The vocal folds are made up of white ligaments shaped like the letter “V,” covered in a membrane. And when we speak or sing, those ligaments vibrate to create our voice. Our vocal folds are so small that Linda Carroll says if you draw a triangle on the front of a penny, the lines are as long as they are.

So what gives a voice like Whitney Houston’s its richness? Renee Fleming, the great opera soprano, likens our vocal folds to the strings on a violin or piano. Think of singing as plucking the strings.

“If you do that with a rubber band, it just makes a twang sound,” Fleming says. “But if you put that string on a box, then it resonates and creates a beautiful sound. So for the voice, it’s the same thing. You're putting air through the folds. They vibrate, and the resonating chambers — which are your mouth, your throat, your sinuses — create the color.”

But just like other parts of the human body, our vocal system works best when we’re young. Steven Zeitels says this is because the tissues lose their elasticity. And the life of a singer can put additional strain on the vocal system: breathing dried-out air in airplanes or singing in places with unfamiliar allergens can have a negative impact. Fleming says that even different types of singing can affect vocal health.

In his medical practice, Zeitels frequently sees singers of all ages with vocal trauma.

“What singers more often than not sustain is ongoing collision forces and shearing stresses to that delicate layer, which has very tiny blood vessels,” Zeitels says. “And so if the blood vessels hemorrhage, you get bleeding in the vocal fold. If they repeatedly hemorrhage, they can scar.”

And trauma in the vocal system can have devastating results. Julie Andrews’ famous singing voice (of “Sound of Music” fame) was silenced after routine polyp surgery in 1997 left her with scarring. Not only that, she could barely speak.

And several years ago, Steven Tyler of Aerosmith was onstage singing the famous high note in “Dream On” when his voice suddenly cut out. After years of singing concerts at 105 decibels — colliding his vocal folds an estimated 780,000 times each show — Tyler had ruptured a blood vessel in his vocal fold, and the blood was now preventing the ligaments from vibrating properly.

Tyler went to see Dr. Zeitels, who had a novel treatment. Another doctor at Mass General had developed a new type of laser gentle enough to remove birthmarks from babies. And Zeitels had modified the laser method — called selective photothermolysis — to treat vocal hemorrhages.

“Essentially, an infant’s skin is like an adult vocal fold that has to maintain pliability,” Zeitels says.

Using the laser, Zeitels was able to seal the blood vessel that had ruptured, without burning Tyler’s vocal folds. Now close to 70, Tyler is back to hitting the high notes.

After her polyp surgery went awry, Andrews also went to see Dr. Zeitels. He removed some of the scar tissue from her earlier surgery, and stretched other tissue to restore a bit of elasticity. She still can’t sing, but has regained her speaking voice.

And there's more in store with "the stuff."

“The stuff” is PEG 30, made using polyethylene glycol. Currently, when doctors do vocal surgery, they have to hope that whatever tissues they don’t remove will still work. But in the future?

“In the future, we will inject a material that retains pliability, so that you can actually dial back in the pliability,” Zeitels says.

PEG 30 can make old skin and tissue pliable again. But it’s still experimental, mainly because the more elastic a material is, the faster it degrades in our bodies — and PEG 30 is pretty elastic. Zeitels, however, remains undeterred.

“I see a world where we've actually created super singers — where someone in their 80s or 90s will walk in and have an injection in the office, and walk out with a transformed voice,” he says.

This article is based on a story that aired on PRI's Studio 360.