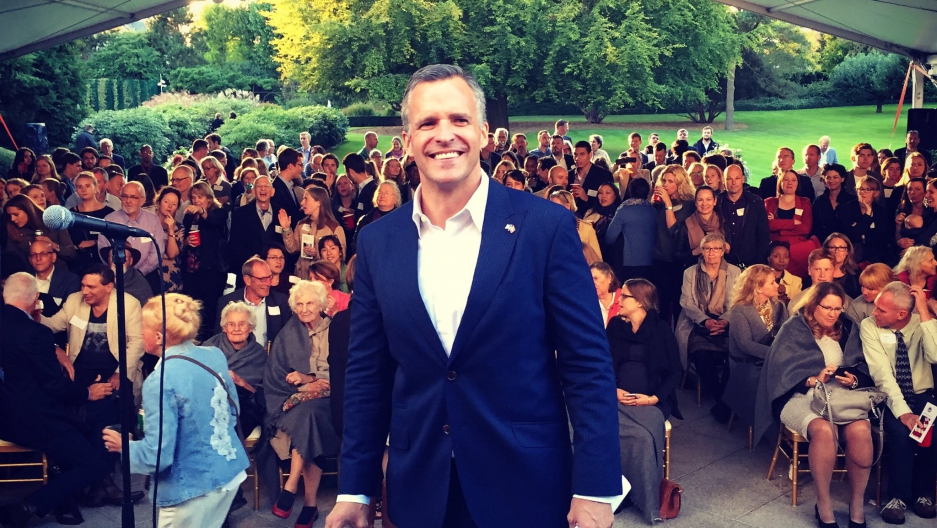 Rufus Gifford, the US ambassador to Denmark, is not your typical diplomat, prone to a life of boring ceremonies and stiff speeches.

No, Ambassador Gifford is something of a celebrity. He's the star of a popular reality show on Danish TV — but, don't hear that and think of Bravo franchises.

“We call it a documentary series, not a reality show, to distinguish ourselves as much as we can from the Real Housewives and the Kardashians," the American diplomat said during a visit to The World's studios.

His show won a Danish television award and has just premiered on Netflix — so those in the States can start watching it, too. It’s called "Jeg Er Ambassadøren fra Amerika," or "I Am the Ambassador From America."

The cameras follow Gifford around, doing what he does as ambassador; each episode also offers a candid glimpse into his personal life in Copenhagen. You can watch him say goodbye to his golden retriever as he heads off to work, embrace his husband Stephen DeVincent — Gifford is openly gay — or ride along with him as he travels to Danish high schools to talk with young students.

Now that the documentary series is available to larger audiences, Gifford says he hopes viewers will see what it means to be a diplomat and a public servant.

“When I agreed to do a documentary series on @dr3tv … I thought only a few thousand people would see it. ... Well, today it premieres on @netflix in the US, UK, Canada, Australia and other countries," Gifford wrote recently on Instagram. "Never in my wildest dreams did I believe this would happen."

“And while I am incredibly nervous about the show being aired all over the world — especially in my home country — I believe in it with all my heart. Just as it has done in Denmark, I hope very much that it will serve as a vehicle through which you learn a little about the US, a little about Denmark, a little about diplomacy and the unique bond between people and nations. And hopefully make you smile and laugh a little along the way. Most of all I hope you enjoy.”

What will I miss most about my job? Afternoons like this. 1000 Silkeborg High School students talking with me on elections, democracypic.twitter.com/K2X00Q1W5u

The idea to chronicle Gifford's life on TV was partly proposed by Danish television producers, and partly his own idea based on his experiences as an ambassador.

“When I first took the job I was traveling around Denmark and really trying to get a sense of how the US Embassy in Copenhagen really fit into the culture in Denmark. One of the things I was really struck by was the fact that Danes really had not a clue about what we did. There was sort of a fascination with what we did, but there was this perception that we would play golf during the day and go to cocktail parties at night and in between, go into the Embassy where we're up to nefarious things somehow, and it I just felt so wrong to me," he said.

Gifford's future is a little uncertain. He's a political appointee serving under President Barack Obama, whose presidential term ends soon. There might be another televison series in his future, or another diplomatic post — or maybe he'll take the advice of his many newfound Danish fans who have urged the ambassasor to mount his own campaign for the US presidency.