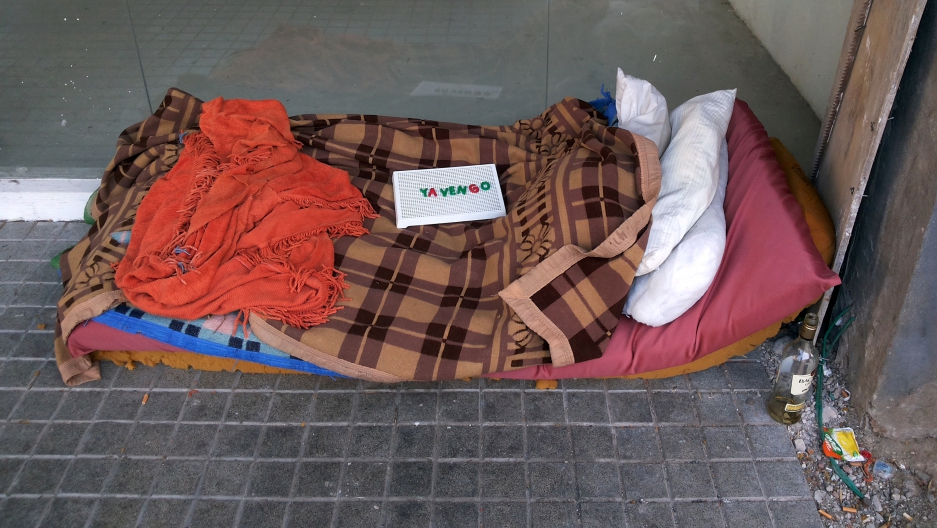 A make-shift bed of a homeless person, with a sign on top that reads "I'll be right back," in Buenos Aires, Argentina, on Sept. 11.

Argentina’s President Mauricio Macri has vowed to eliminate poverty in the country.

But in order to even begin, he needs to know how many people actually live below the poverty line in South America’s third-most-populous country. Politics has made this task shockingly difficult — the previous administration even gave up counting for a couple of years.

Now back on the job, the government’s National Statistics and Census Institute released some eye-popping figures on Wednesday: Argentina’s urban poverty rate is 32.2 percent, with more than 6 percent of urban residents living in extreme poverty.

These are the first official poverty stats from the national agency in three years. They come after a period of tumult and embarrassment over state-sponsored mathematics.

Macri’s populist predecessor, Cristina Fernandez de Kirchner, claimed throughout her tenure that the country’s poverty rate was in the low single digits. Last year, she famously said Argentina had less poverty than Norway or Denmark — “below 5 percent.”

Her economy minister remarked that the poverty rate was a “stigmatizing figure” when he announced the government would stop keeping track.

Since 1980, the number of people living in extreme poverty in Latin America and the Caribbean has dropped by two-thirds, according to the World Bank. Despite all the fuzzy data, it's likely Argentina's poverty rate has dropped since then, too. Almost half the country was poor before President Nestor Kirchner took office in 2003, as Bloomberg reported.

But the new official figures suggest President Macri has a long way to go to meet his goal of wiping out poverty, and he's realizing that. "It’s obvious we won’t reach zero poverty in four years,” Macri said this week. Rather, he added, "zero poverty is a path that we call on all Argentines to help us with because it just can’t be the task of a government.”

The newly released urban poverty figure is pretty much in line with other, independent measurements. Economists have often pointed to reports by the Pontifical Catholic University of Argentina. For April, it estimated 32.6 percent of Argentines are poor — almost equal to the government agency's new rate.

Notably, officials at the National Statistics and Census Institute accused Cristina Fernandez de Kirchner’s government of intervening in their work and manipulating economic statistics. And her husband and predecessor, the late Nestor Kirchner, controversially fired the head economist at the institute back in 2006.

Fernandez de Kirchner’s government used to fine statisticians who released figures that contradicted the “official” numbers. In 2013, Argentina became the first country to be censured by the International Monetary Fund for not issuing sound economic data.

The IMF was invited back to Argentina earlier this year to review the country’s finances for the first time in a decade.

Critics of the Kirchners say they held Argentina back while much of Latin America was growing economically and reducing poverty. There are international factors at play, but domestically, the couple has been accused of exacerbating poverty through economic mismanagement, corruption (Fernandez de Kirchner’s assets are frozen as she's prosecuted for allegedly stealing millions of dollars from the country), and the tactic of hiding the scale of the country's problems.

But now, as market-friendly Macri ushers in reforms to turn the economy around, he's taking flak for making life hard for lower-class Argentines. At least now we're beginning to learn just how many there are.