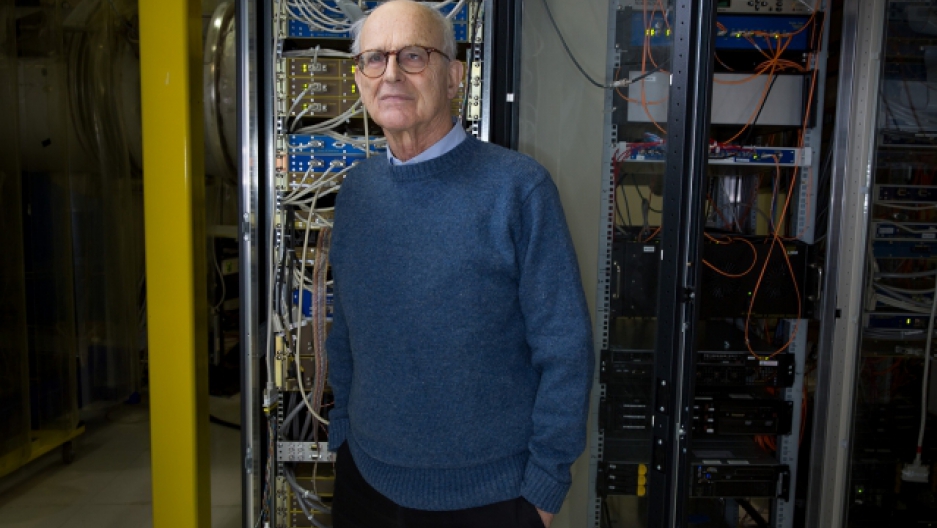 MIT professor Rainer Weiss dreamed up the idea behind an antennae so sensitive it could detect faint invisible ripples in space and time.

When the Nobel Prize in physics is awarded next Tuesday, many in the world of science will be surprised if Rainer Weiss, an MIT professor emeritus, is not among those honored.

Weiss dreamed up the idea behind the Laser Interferometer Gravitational-Wave Observatory or LIGO. It's a sort of massive antenna so sensitive it detected faint invisible ripples in space from 1.3 billion years ago, a discovery made secretly last fall and revealed in September.

Weiss traces his love for science back to his European youth. His mother was a German actress. His father was a Jewish doctor, and a communist. When the Nazis rose to power, the family fled Germany. Weiss spoke about his childhood and his discoveries in physics.

On his family's flight from Slovakia in 1938 to America

"We got out for a very special reason. There was a family in St. Louis, they ran a department store, they gave bond to the American government. They said 'Look, we'll take 10,000 Jews, if they get in trouble we'll pay for them.' Which was remarkable. Just imagine such a thing. [In America] we were considered Germans. And I think my mother made a wonderful mistake, sending me to public school in lederhosen. And this was the day the Germans bombed Rotterdam. And the teacher and all the kids read the paper, and here's this damn German. That was the only time I ever sensed any hostility."

On the beginnings of his scientific career

"I was probably 12 or so, and the war was over, and the streets of New York, especially downtown New York, were loaded with stuff coming back as war surplus. And you'd go down to Cortland Street in New York, which no longer exists, it was near the World Trade Center. What would happen is you'd go here and you'd find a whole box full of transformers, another box full of capacitors, vacuum tubes, anything you could ever want — radar sets half disassembled. As a kid that was mind-boggling. You bought stuff for nothing at all. If you could lug it on the subway home, you got it. I started making all sorts of stuff, radio, hi-fi sets which didn't exist. And I was very lucky there was a movie theater in Brooklyn that had a fire behind the screen. If you went down there and unscrewed the loud speakers that were behind the screen you could have them. So I took them home, I got six or seven of them home, they were heavy, big loud speakers."

On his earliest audio creations

"I had a wonderful setup because three things were happening simultaneously: FM radio was coming in, good amplifier circuits were around, I mean I copied other people's circuits — what did I know. I built something and I would invite some of the emigres, because they were very interested in music, to come over and listen. We would hear the New York Philharmonic, and these people were just blown away. Imagine, they said '[music] like in the concert hall!' And so they wanted one. And so little by little this thing grew into a business. If I had not gone to college, I probably could have made some money.

But what got me to go to college was the problem that you raised: Everything was wonderful if you had an FM set, but vinyl wasn't there yet. It was shellac records that made that horrible [scratching], 78s. All you heard was that goddamn record scratch! So the thing was, how do you get rid of that? And that was a puzzle that was just beyond me. I couldn't do it. I didn't know enough math, I didn't know enough real electrical engineering, and effectively that drove me to college. Let's face it, I wanted to solve that problem."

On the mechanics of black holes

"A black hole is a place where if you were an astronaut and you approached it, very strange things begin to happen to you. Your feet get tugged away from your head, and you get stretched apart. And then the molecules that made you, they get stretched apart. And then even the inside of the molecules get separated into atoms and then into individual pieces. But that whole idea that the geometry is so curled up and the strength of gravity is so strong that it breaks up matter, it becomes the strongest thing in the world inside that black hole."

"It wasn't me alone that built that. You make it sound like I was this incredible person. There were a lot of other very good people. Let's take cognition of that.

What did we discover? We knew black holes existed. But we established that black holes live in pairs. The other thing that we found is we were able to detect gravitational waves directly. Now they had been seen before by indirect methods, very beautiful experiments had shown that there were gravitational waves. But the fact is that you could make an instrument that could detect them.

And then the most important thing to me, that may not be so important to others, is that the Einstein equations that he struggled over in 1915, and he really agonized over them, he didn't know anything about black holes, he didn't know about this. It worked for gravity, that he understood. But here is an extreme case where gravity is all there is, and things are moving damn near the velocity of light, and it still works! [Einstein's] equations are still good in that extreme regime. To me it's just spectacular!"

On what he would like to have shown Einstein

"One of the dreams I would have, had Einstein been still alive, is to tell him about this. I would have loved to have seen what he would have thought, what his expression would be. We were able to measure very very tiny motions, smaller than he would have ever imagined.

You look at the remarkable things we could do, and Einstein would have been tickled pink by them, I think."