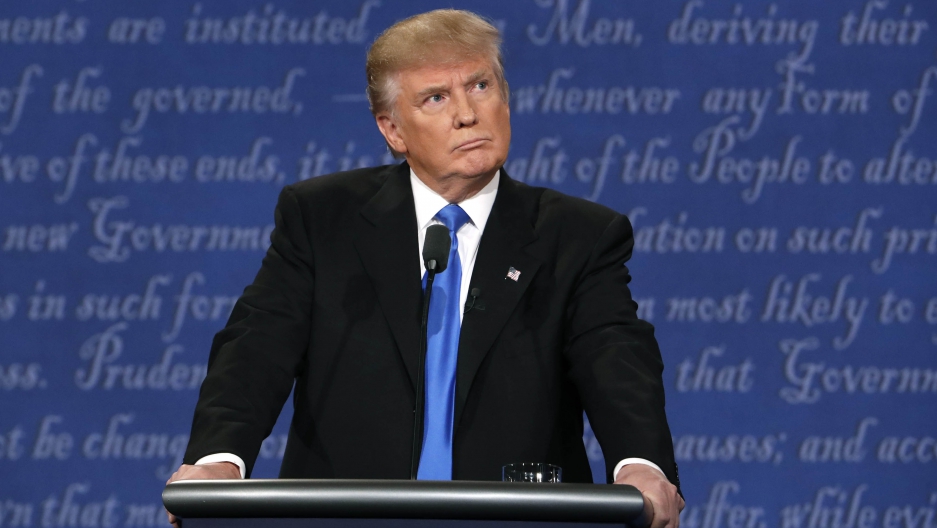 For the millions of Spanish-speaking Americans who caught the presidential debate on Univision Monday night, there was a familiar voice: Vicente de la Vega.

De la Vega was the simultaneous interpreter for Donald Trump during the debate broadcast — a role he's played at various times during the campaign. He's also the president and CEO of Precision Translating Services.

Preparing to interpret Trump is no joking matter.

“You have to know intimately the person you’re going to be interpreting for,” says de la Vega.

He spent weeks studying Trump’s interviews, speeches and rallies on YouTube, trying to understand his tone and turns of phrase. He was not, however, prepped to “sniffle” — as Trump did multiple times last night.

De la Vega does pay attention to the tone and cadence of whomever he happens to be interpreting. If Trump yells, so does he; if the candidate whispers, so does de la Vega.

“We have to mimic what they do, in the foreign language,” he says.

De la Vega interpreted the presidential debate Monday night in the same room with interpreters for Hillary Clinton and Lester Holt. They were all seated in sight of one another, so that they might react in real time to each other and the candidate they were interpreting.

“I always had a love for languages,” he says.

This love began as a grade schooler in Cuba. Growing up in Havana, de la Vega attended a bilingual (English and Spanish) school. In the 1960s, at age 12, he immigrated to the United States — and his passion for languages only intensified.

“When I came here, I went to a public library and checked out some books to learn French and German. That started what has been to me a career that I have loved for the past 46 years.”

De la Vega has interpreted for many, many candidates and presidents over those decades, from Ronald Reagan to Bill Clinton to both George Bushes and Barack Obama.

Bill Clinton ranks as one of the hardest presidents he has had to interpret, he says.

“Bill Clinton tended to speak and leave dangling clauses and then come back to them.”

George W. Bush, on the other hand, would often cause de la Vega interpreting jitters with his quirky pronunciation of certain words. Remember how he used to pronounce "nuclear"? De la Vega will never forget it.

Politics don’t come into play when interpreting politicians, he says. He interprets on all sides of the aisle, and at all sorts of events.

“You have to discard any politics and just do your job.”

His all-time favorite president to interpret was Ronald Reagan.

“He was very elegant. He had a fabulous speech pattern, emphasis where it had to be put. He was great. He was really, really my favorite.”