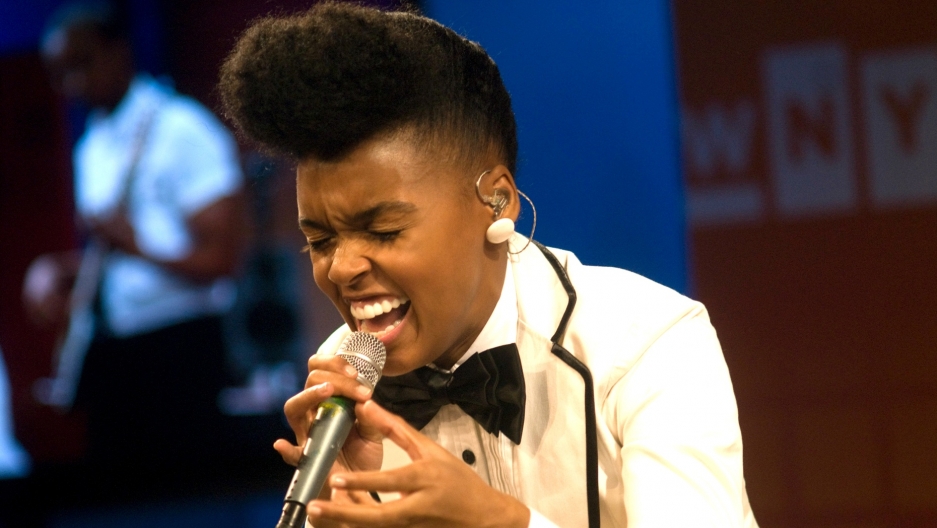 Before becoming a movie star, playing with Prince, and singing "Happy Birthday" to one of the first daughters, Janelle Mone came to our attention with her sci-fi funk persona. On her breakout record "Metropolis: The Chase Suite,"Mone inhabits the character Cindi Mayweather, an android from the 28th century. In a live performance in WNYC's Jerome L. Greene Performance Space, Mone performed the songs "Sincerely, Jane" and "Come Alive," and explained Mayweather's backstory.

Kurt Andersen: There's the famous Fritz Lang movie "Metropolis." Were you inspired by that hideous vision of the future?

Janelle Mone: "Metropolis" was very inspiring to me. Although it was written in 1927, it mirrors the constant struggle between the haves and the have-nots that's still going on in the present. I have a very imaginative mind, and I just went further with it. But Metropolis is here, it's universal.

You have this character called Cindi Mayweather. Who is she?

Cindi Mayweather is the archandroid. It was always said that if the archandroid came back, that the androids would be free from the bondage that the humans put on them, and they would be treated with respect and dignity. She realizes her superpowers and she embraces what makes her unique. She's the one who can change the android community forever and lead them to the promised land.

You're saying this with conviction, as if you're telling me facts from the future.

Oh yeah. This is real truth. Janelle Mone in 2719 worked in a superhero surplus store and she was thrown back to 2007. But before they threw her back, the snatchers cloned her body, and Cindi Mayweather has her DNA.