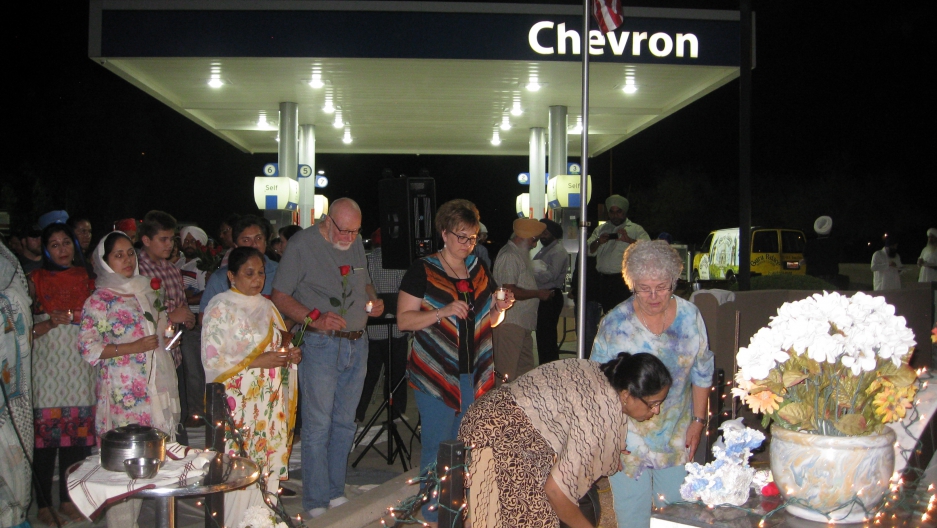 On the 15th anniversary of the hate crime shooting of Sikh American Balbir Singh Sodhi, about 130 people gathered at his gas station in Phoenix to remember and pay tribute.

The day after Sept. 11, 2001, Rana Singh Sodhi and his older brother, Balbir, were out running some errands in and around Phoenix. Rana remembers that they started getting harassed.

But they were in their country. The brothers had immigrated to the US more than a decade before.

The Sodhis belong to the Sikh faith. In Sikhism, men don't cut their hair; they wear it in turbans and have beards. And Rana says, after 9/11, the Sikh men he knew were all having similar problems.

He says Balbir worried that someone might get hurt. So the brothers and a few other members of the Sikh community in Phoenix came together and decided to hold a press conference the following Sunday. They’d explain to people who Sikhs were, that they believe in peace, and that they weren’t terrorists.

On that Saturday, Balbir went shopping for an American flag to put up at his gas station. But he couldn't find any in the stores — they were all sold out. On his way out of a Costco that day, he stopped by a table for victims of 9/11 and gave them all the cash in his wallet — nearly $75.

About 30 minutes later, he was dead.

A man who had said he wanted to kill Muslims had driven up to Balbir’s gas station and shot him.

The Sodhis came to the US to escape the violent persecution of Sikhs in India in the 1980s. Like many other Sikhs, they saw the US as a safe haven, a place where they would find religious freedom and live the American dream.

In the midst of it all, though, Rana Sodhi says there was also an outpouring of love from the community. People brought flowers and cards to Balbir’s gas station.

About 3,000 people showed up at the city’s memorial service.

“That really opened my heart,” he says now.

The regional head of the Anti-Defamation League reached out to Sodhi. He too had lost a brother, and they became close. Sodhi says the anti-hate group leader encouraged him to go out and tell his story, to educate people about Sikhs.

That was the start of Sodhi doing community outreach and education.

Today, Sodhi speaks at local schools and at events all over the country. He’s been featured in documentaries and invited to the White House.

When he sees people staring at him now, he goes out of his way to greet them. And if they have time, he tells them his story.

In 2016, things aren’t magically better. Hate crimes against Muslims or those mistakenly perceived as Muslim are still more than double what they were before 9/11.

There are the big ones, like the mass shooting at a Sikh temple in 2012, and the small ones that never make headlines.

Sodhi says he’s had someone walk into his gas station and tell him, “You leave or you will die.” Another of his brothers was killed in suspicious circumstances in San Francisco.

One time, he says, when he was out shopping, a woman with two kids stopped and asked him if he was the person featured in the PBS documentary. He said yes.

Sodhi has a large extended family in Phoenix and has raised three kids there.

When I meet his 21-year-old son Satpreet, I'm surprised he does not wear a turban.

“I cut my hair literally a year ago,” Satpreet says.

He went through most of his life wearing a turban, and says, of course, people gave him a hard time. But that’s not why he decided to cut his hair. He says he did it because he wanted to feel what it’d be like to do it, for the first time ever.

Almost none of the younger men in the Sodhi family wear turbans. Satpreet says he loves his culture but it’s up to his generation to decide how to live their Sikh and American identity.

When I ask him if taking off his turban has made life any easier, he says yes.

“But at the end of the day, just being brown in general is rough living. But at the same time, we’ve gone through it for so long that it’s just normal now. Even after my haircut, I still get dirty looks. There’s no other reason besides my skin color now. I don’t wear something on my head.” 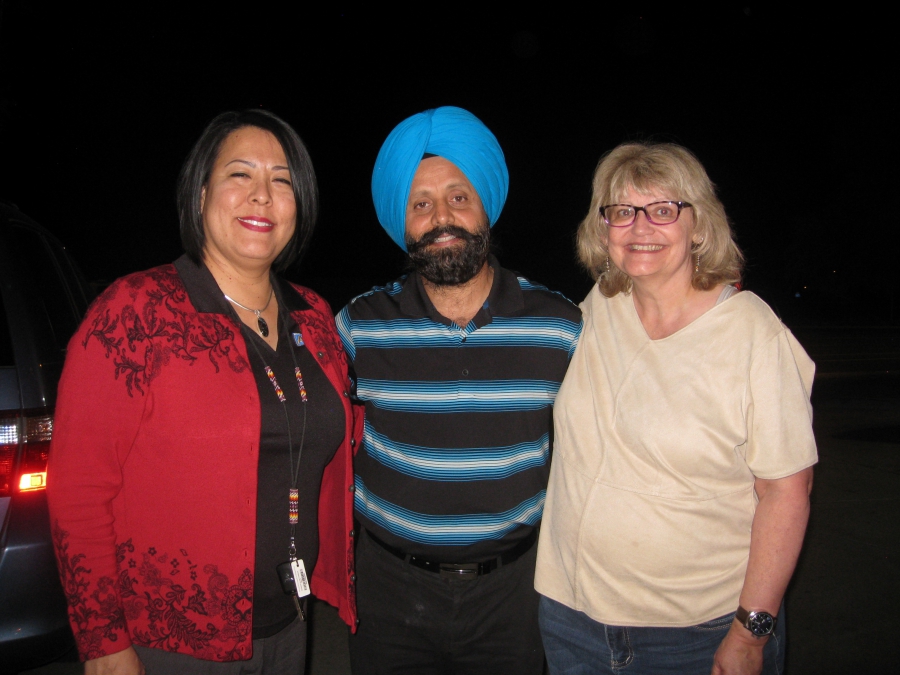 Rana Singh Sodhi (center) at a memorial service for his older brother, Balbir, 15 years after his murder in the days after 9/11.

Last Thursday, on the 15th anniversary of Balbir’s death, around 130 people gathered in the parking lot of his gas station on the outskirts of Phoenix for a memorial service. It was a mixture of people — Sikhs, non-Sikhs. One woman who’d lost her stepfather on 9/11 even flew in from New York.

At the end of the service, Rana Singh Sodhi spoke.

“Before the death of my brother, half hour before, he called me,” he says. Balbir was asking Rana to bring over an American flag.

“That’s his last wish. He wanted to put a flag on his gas station,” Sodhi says.

He invited up two police officers, and everyone watched as they raised the American flag right next to the spot where Balbir was murdered. Then, the children in the audience came up and led the group in the Pledge of Allegiance.

Today, Balbir Singh Sodhi’s turban and diary are in the Smithsonian National Museum of American History.