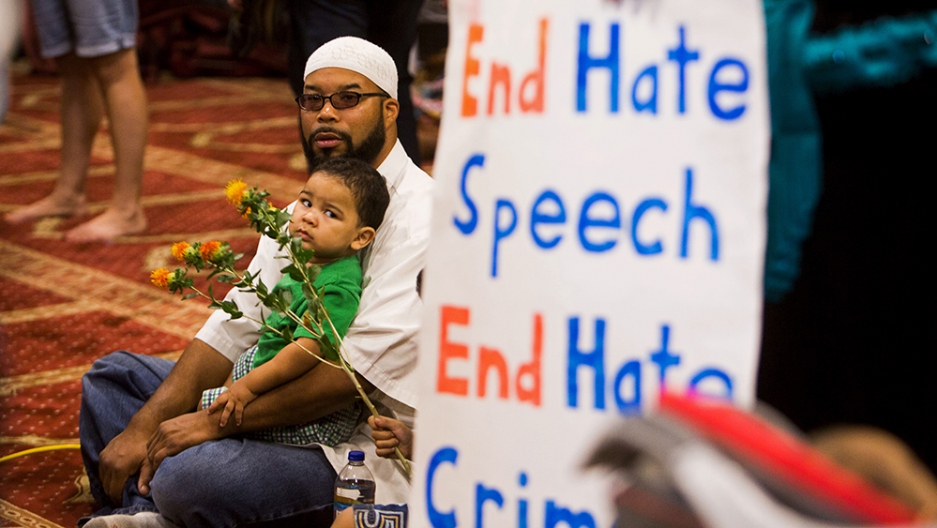 Attendees sit next to a poster as speakers from different faiths speak at an interfaith rally titled "Love is Stronger than Hate" at the Islamic Community Center in Phoenix. The rally was held in response to an earlier anti-Muslim rally at the same location.

Statistics from the FBI show that hate crimes against Muslims have jumped in the years after 2001.

"I was afraid to go outside. If I stayed inside, I couldn’t mess up, except maybe with my words, which I policed carefully. I couldn’t speed, I couldn’t frighten anyone, I couldn’t break any law — no matter how tenuous — and therefore couldn’t be thrown in Gitmo," says American Muslim writer Shawna Ayoub Ainslie who shared her experience in a Huffington Post article.

We looked at data from the FBI on hate crimes against Muslims and found that her fear is not entirely groundless.

Looking at the figures compiled by the FBI, the number of anti-Muslim hate crime incidents jumped in 2001, from 28 to 481 incidents. The number dropped in the following years, but has never returned to levels reported before the 9/11 attacks.

We also wanted to take a look at the total number of hate crimes to get a sense of the bigger picture.

But while Jews are consistently targeted for their faith, the number of incidents has dropped significantly since 2008.