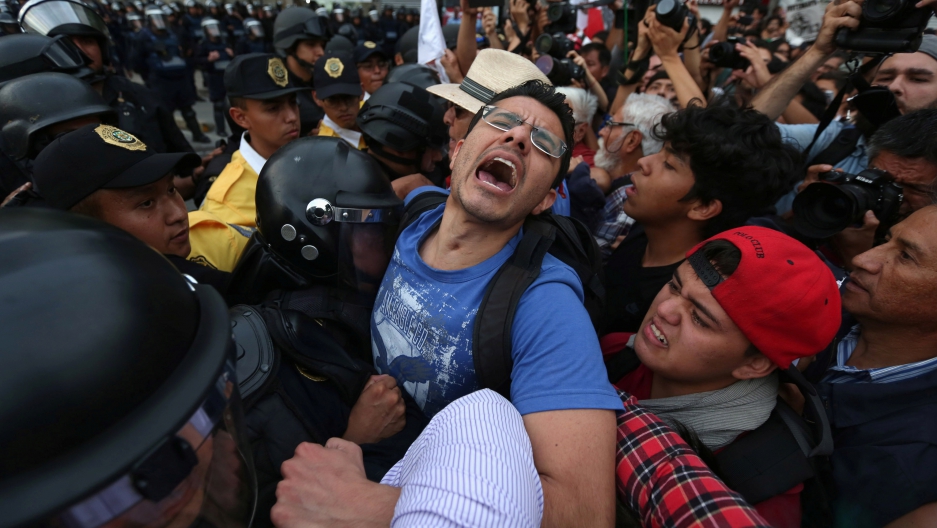 Demonstrators clash with riot police as they take part during a march demanding the resignation of President Enrique Pena Nieto in downtown Mexico City, Mexico, Sept. 15, 2016.

Thousands of people protested in Mexico City on Thursday, demanding that President Enrique Pena Nieto resign over his handling of drug violence, corruption and his meeting with Donald Trump.

Demonstrators held signs reading "Pena Nieto INEPT, RESIGN for the good of Mexico!" and waved blackened flags of Mexico on the eve of the country's Independence Day.

They marched across the capital toward the Zocalo square, where the president traditionally stands on a balcony of the National Palace the night before the holiday to replicate the "grito," or shout of independence, made in 1810.

Riot police stood near the Zocalo to block access to protesters, who marched under the rallying cry "resign now."

Parents of 43 students missing since Sept. 26, 2014, joined the protest, with people angry at the government's failure to solve the case, almost two years after the students were abducted by police and allegedly killed by a drug cartel.

Some shouted "Pena out!" while one sign read: "We're missing 43. State crime!"

"We don't have a reason to shout 'viva Mexico.' ... There are thousands of injustices," said Cristina Bautista, mother of one of the missing trainee teachers.

Ismael Padilla, a 49-year-old assistant principal at a secondary school who wore a black charro suit, said he was unhappy at Pena Nieto's decision to invite Trump last month.

The Republican White House hopeful has angered Mexicans for demanding that the country pay for a border wall and describing migrants as rapists.

"We were apparently independent," Padilla said.

"After the visit of this person who has discriminated against our brothers ... we are outraged and ashamed that he came here like a head of state, because that was the treatment he was given," he said. "We have very little to celebrate."

Nubia Medina, 64, held a sign stating that "all the inept and corrupt must go."

"We are tired that this government has always done things badly," she said.

"It has neglected social issues. They live like princes while the people live on minimum wage. There are many who have disappeared or died."

Other protests unfolded elsewhere, with hundreds demonstrating peacefully in the western city of Guadalajara.

But in the southern city of Oaxaca police used tear gas to repel teachers from a radical union opposed to Pena Nieto's education reform. They responded by throwing rocks and launching fireworks at the officers. One person was injured.

Pena Nieto, who took office in December 2012, has seen his approval rating sink to 23 percent in a recent survey by Reforma newspaper.

Trump's visit on Aug. 31 rocked his administration, with his finance minister, Luis Videgaray, resigning following reports that he spearheaded the unpopular meeting.

But Pena Nieto has been haunted by older scandals, notably the disappearance of the 43 students.

Parents of the students voiced outrage on Thursday after Pena Nieto named Tomas Zeron to the National Security Council shortly after he resigned as head of the Criminal Investigation Agency.

The parents have demanded Zeron's resignation since independent experts from the Inter-American Commission on Human Rights said severe irregularities were committed in the investigation.

The case has put a spotlight on the plight of 28,000 other people who are listed as missing in the country.

Pena Nieto has also come under fire over his wife's purchase of a mansion from a government contractor, prompting him to issue a rare apology although the couple denied any wrongdoing.