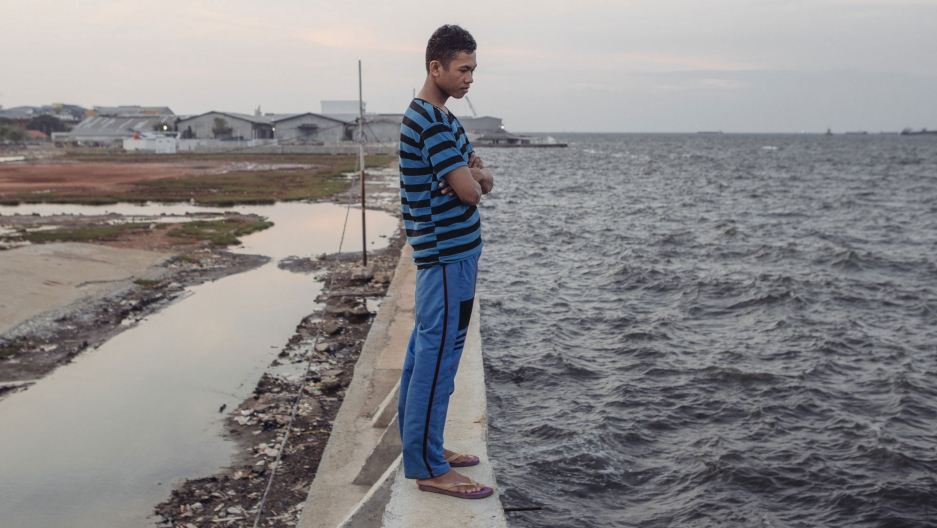 Feri Yadi, a resident of Muara Baru in North Jakarta, stands atop the seawall recently built to protect his neighborhood. He has little confidence that the wall will work as expected. "Like in the past, this will be broken somehow" he says.

Like millions of Jakartans, Dedi Setiawan lives along one of the city’s 13 rivers, in a village-style neighborhood called a kampung. The area’s unpaved paths are jammed with people selling snacks and cell phone credits out of carts, residents hang laundry out to dry between bamboo shacks and small brick homes, and the river crossing is a wooden boat pulled along a wire strung between the banks.

Life along Jakarta’s rivers can be challenging. The city faces some of the worst flooding problems of any major urban area in the world, in part because those 13 rivers, often swollen by monsoon rains, drain into a dense urban area that’s rapidly sinking below sea level.

In 2013, rising waters sent Setiawan scrambling to the second floor of his house, and during the flood, he couldn’t get in touch with anyone to find out what was going on elsewhere.

“Back then we didn’t have the communication system,” he says.

But the growth of social media has changed that.

“Now we mainly use WhatsApp and Facebook groups to communicate with each other,” he says.

Word spreads organically — people upriver might text their friends a photo of flooding in their part of town so their neighbors downstream can prepare.

Going online for flood information is faster than waiting for official announcements, and residents say they trust the information more because it’s coming from a real person.

Fajar Inayati, who lives upriver from Setiawan, says during a recent flood her friends were sharing photos before the government could get the word out, and even before it hit the local news. 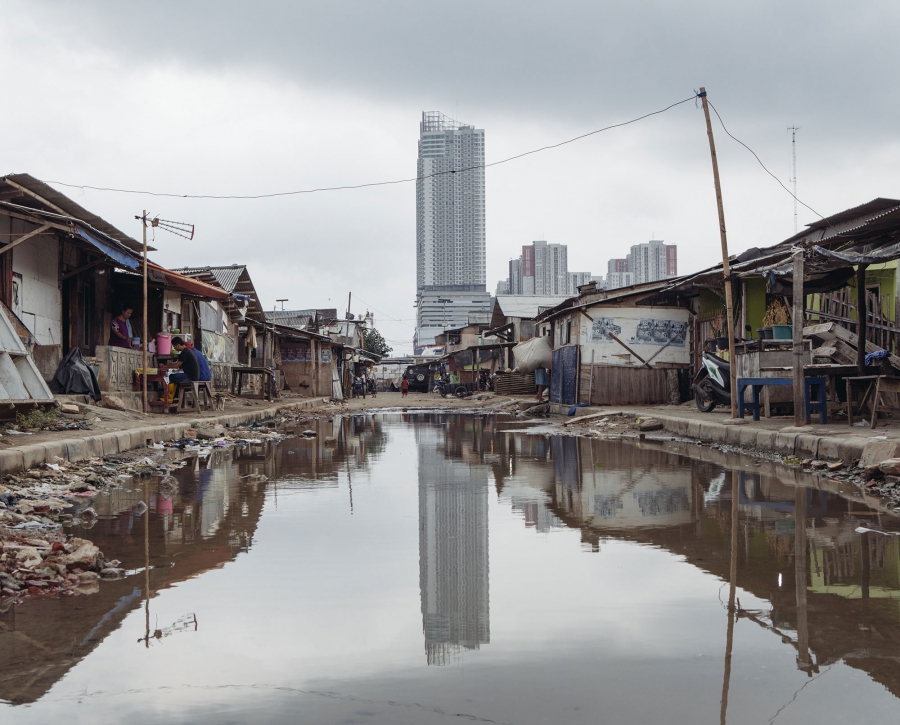 Seawater floods some streets in Jakarta's Muara Angke neighborhood even during low tides and the dry season. Most of the district's residents are fishermen who work in nearby Jakarta Bay.

“We were not at the area where the flood came, but we heard it from our friends who shared it,” Inayati says. “They were there, so I believe that the news must be reliable and factual.”

The social media posts prompted her and her neighbors to start prepping sandbags to keep the water at bay.

Of course social media can also be unreliable sometimes. Rumors spread fast, and even good information can get drowned out in the chaos of a natural disaster.

That’s where PetaJakarta comes in. It's an open-source, real-time, online map of the city that automatically filters Tweets about flooding to improve accuracy and fill in the gaps between official city reports.

When someone tweets "banjir"  — the Indonesian word for flood —  and tags @PetaJkt, PetaJakarta automatically replies, asking them to verify the tweet with geotagged photos. The app then combines all those reports with official data from the city into an up-to-the-minute, online flood map that can be more reliable than other social posts.

“If you have four people with photos at different angles showing one event, that's a pretty difficult thing to stage,” says Etienne Turpin, a Canadian-born designer and research scientist at MIT's Urban Risk Lab. He founded PetaJakarta in 2014 along with colleague Tomas Holderness. Today they operate an eight-person team of mostly local residents out of an office in Jakarta's Guntur neighborhood.

Holderness and Turpin both study disaster resilience, and that's what drew them to Jakarta. Turpin says he once heard Indonesia referred to as a “living laboratory for disaster.” And Jakarta, he says, “is the sort of center of that laboratory.” 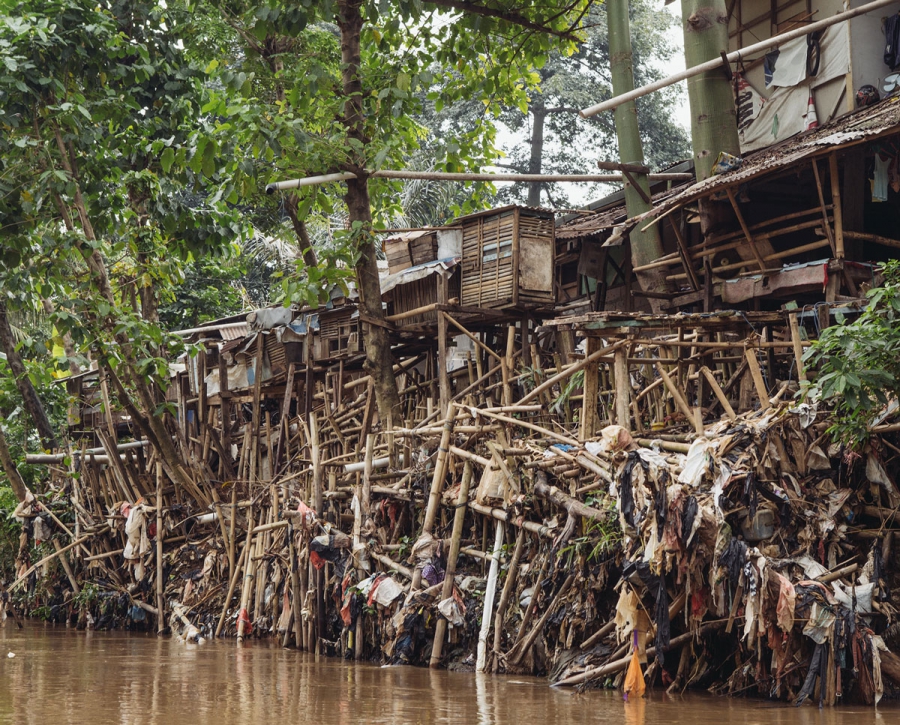 Slums line the Ciliwung river, one of 13 that run through Jakarta. Trash accumlated on the banks shows the high water mark during monsoon season.

By one estimate, Jakarta is also the world's capital of Twitter activity, which Turpin says makes it a goldmine of data, full of what he calls “human sensors” for tracking disasters and vetting real-time reports.

“If you want to decide if you should leave work early to pick up your children from school, or check on your elderly parents, having a picture of a map every six hours doesn't give you a lot of confidence about making those decisions,” Turpin says.

It's about democratizing disaster management, he says.

“If decision support is just concentrated in the hands of the government, we have a bottleneck of information. But if real-time information is being collected, validated and shared, then we have 31 million decision makers deciding, 'Should I drive this way? Should I avoid a certain area?'”

Given its speed and accuracy, even some government officials have turned to PetaJakarta. Soon after it went online, Jakarta's governor urged his followers on Twitter to use PetaJakarta to tweet about flooding.

Anto Sugianto, who works for the city in the flood-prone northern district of Ancol, says PetaJakarta has become an important tool in flood response.

During a flood in April, Sugianto says he used PetaJakarta to help city teams decide where to deploy pumps to suck water away from important streets, and what roads to close to keep people from being trapped in their cars. His team even contributed their own geotagged photos to the site while they worked.

Sugianto says Petajakarta has begun to transform flood response in the city from a top-down effort to a cooperative relationship between the city and its residents.

“It’s not only that the Kelurahan [district] can give information to the public,” Sugianto says. “Now we get information from them, too. Give and get.”

A model for elsewhere

And PetaJakarta is getting noticed beyond Indonesia. Both the US Federal Communications Commission and the International Federation of the Red Cross and Red Crescent have cited PetaJakarta as a model of community engagement in disaster response. 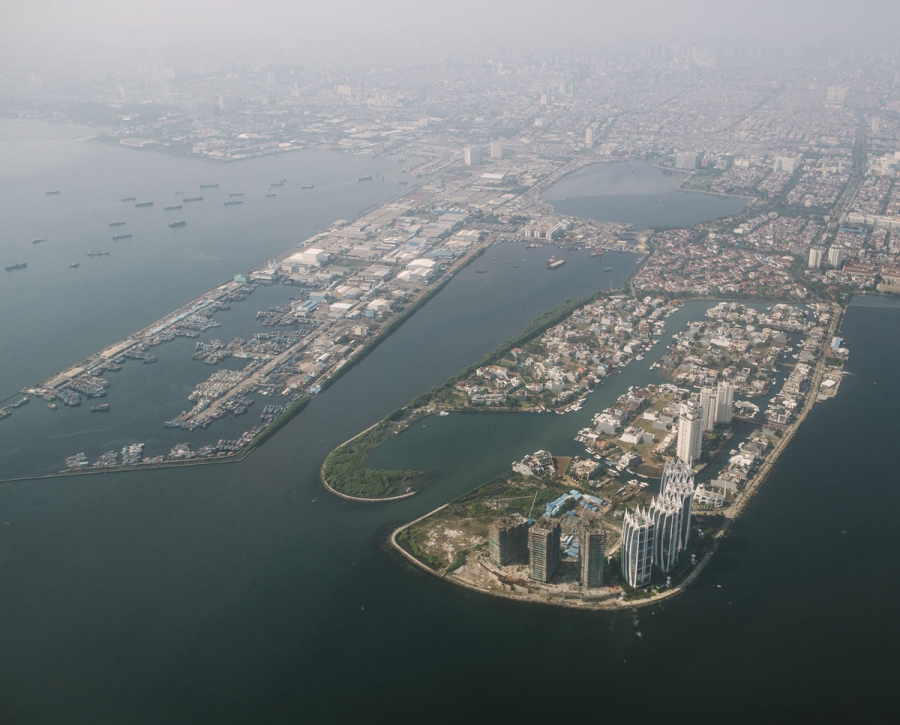 Aerial view of North Jakarta. Nearly all of the northern part of the city is now below sea level.

Of course, better online mapping won’t help actually prevent the flooding that plagues Jakartans like Dedi Setiawan and Fajar Inayati. That would take an overhaul of the city's stormwater system, including new urban planning ideas and investments in green infrastructure to restore some of Jakarta's paved-over landscape.

But as cities like Jakarta struggle to adapt to the new normal of high water that’s coming with global warming, online tools like PetaJakarta may help them live better with what they can’t change — and connect with each other while they do.

Read or hear the whole series: Living with Rising Seas