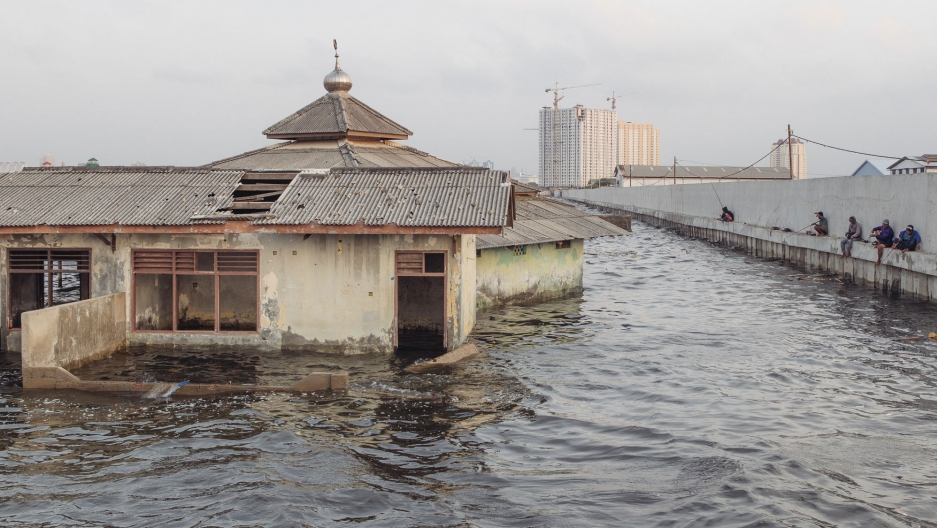 An abandoned mosque outside the seawall in Muara Baru, Jakarta. The city is sinking as a result of massive groundwater extraction, and the problem is especially bad in Muara Barus, which is already below sea level.

The Java Sea to the north. Thirteen rivers flowing through the city from mountains to the south. For as long as it’s been inhabited, the Indonesian capital, Jakarta, has been regularly inundated by these two forces of nature.

Now, confronted by increasingly heavy monsoon rains, rising seas and other challenges, the metro area of 30 million people is facing a dire threat from climate change.

A good place to see what's at stake is in north Jakarta, where a leaky concrete seawall is the only thing holding back the Java Sea from flooding almost half of the city. Even on a clear day, the seawall is just a few inches from overtopping.

“Basically this is a life threatening situation,” says Victor Coenen, an engineer for the Dutch engineering firm Witteveen+Bos, whom the Indonesian government has asked for help shoring up its flood-control infrastructure.

“If this seawall breaks, you have three meters of water in this kampung area where nobody can swim.” 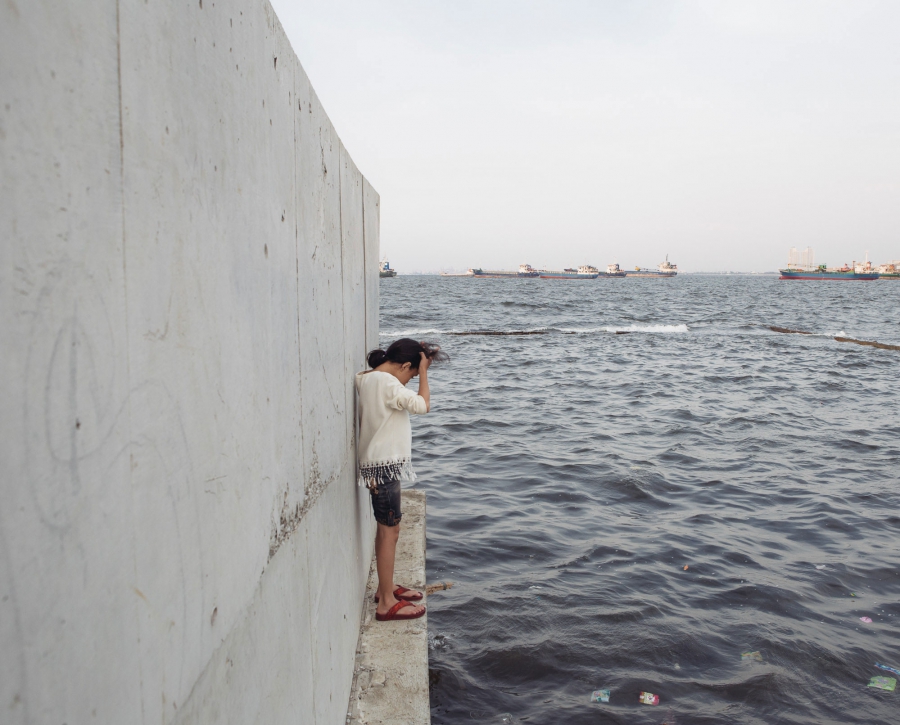 A girl stands on the outer side of a recently reinforced seawall in Muara Baru, Jakarta. The neighborhood on the other side of the wall is below sea level.

“Kampung” means village, and it's what Indonesians call the kind of neighborhood below the wall. This is a working-class community, where people live under asbestos roofs and earn a meager living by fishing in the bay or selling snacks on the street.

Roughly 100,000 people live right next to the seawall, well below the sea level.

About 40 percent of Jakarta today is below sea-level, and that share is growing. That’s partly because climate change is slowly raising sea levels, but the bigger problem right now is that much of Jakarta itself is sinking as the water table beneath the city depletes. Jakarta has some of the world's highest rates of land subsidence, with some parts sinking nearly 10 inches per year.

“It’s really a problem on top of another problem, making things even more difficult,” Coenen says.

Jakarta’s problems managing water have piled up over decades as it ballooned into one of the biggest cities on Earth. Now the Indonesian government is trying to address some of them with an ambitious “national coastal development” strategy. It includes a $30 billion plan to build a new seawall, 300 miles long, and to enclose Jakarta Bay behind a chain of artificial islands. 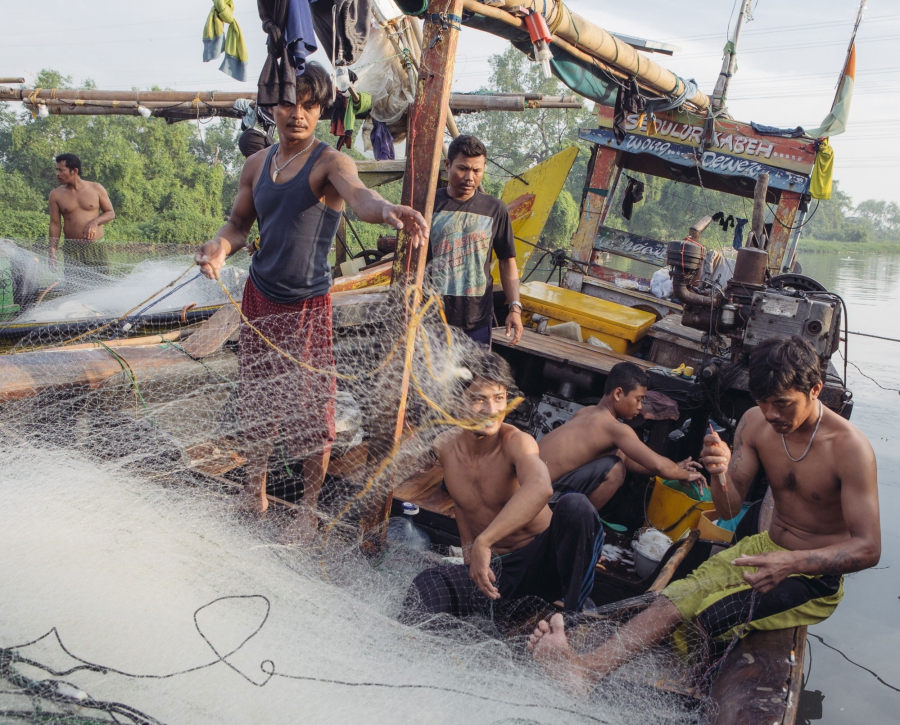 Fishermen in Muara Angke, Jakarta, a neighborhood along Jakarta Bay whose economy is largely dependent on the bay.

But the plan isn’t popular with some of the very people it’s supposed to protect.

Kuat Wibisono, who leads a fishermen’s group in a seaside kampung called Muara Angke, says new islands in the bay are already affecting local fishermen’s catch. He acknowledges that flooding can be a real problem, but he doesn’t think the bay development plan will solve that, or anything else.

“We don’t really see how the reclamation project will improve (our) economy, or how it will benefit us socially or environmentally, because the reclamation is burying our fishing area,” Wibisono says.

And he faults the process as well.

Wibisono claims local fishermen only found out about the government's plans when their boats started running aground in unfamiliar places, where engineers were already raising the seafloor for new artificial islands.

“There was not any discussion, or announcement to our community from government. [It’s] as if Jakarta Bay is theirs,” he says.

Wisbono's group successfully sued to stop the construction of artificial islands. There's currently a moratorium on new islands, and later this year the country’s president is supposed to weigh in on whether construction can continue.

Wibisono says he thinks the real motivation for Jakarta's land reclamation isn’t flood control, but making more room for rich people. That’s because the new seawall and protective islands would be financed by leasing the newly created land to wealthy developers.

Engineer Victor Coenen understands that sounds like a land grab.

“This does create the image that this is a project for the rich,” Coenen says. “Unfortunately, if you don't want to do it with this kind of high-end development, then you have to find some public money. And public money is scarce in Indonesia.”

One place where public money is being spent to try to help address Jakarta’s flooding problem is inland, where Jakarta's 13 rivers are choking on the twin problems of trash and overcrowding. Millions of people live along riverbanks in kampung neighborhoods of cement and brick houses and bamboo shacks, and many residents toss their garbage and even defecate directly into the rivers.

“People still put rubbish in the river because they don’t have to pay,” says Sri Tantri Arundhati, Indonesia’s director of climate change adaptation.

Arundhati says trash can clog pumps and dams, and prevent the rivers from draining to the sea. “(So) you have to solve first the drainage problem”

Overcrowded riverbanks can make flooding worse, and lead to disaster during severe floods.

The government's answer to these twin problems is to relocate as many as 100,000 riverside residents to new subsidized apartment buildings, widen the rivers so they can hold more stormwater and install levees to hem in high water. 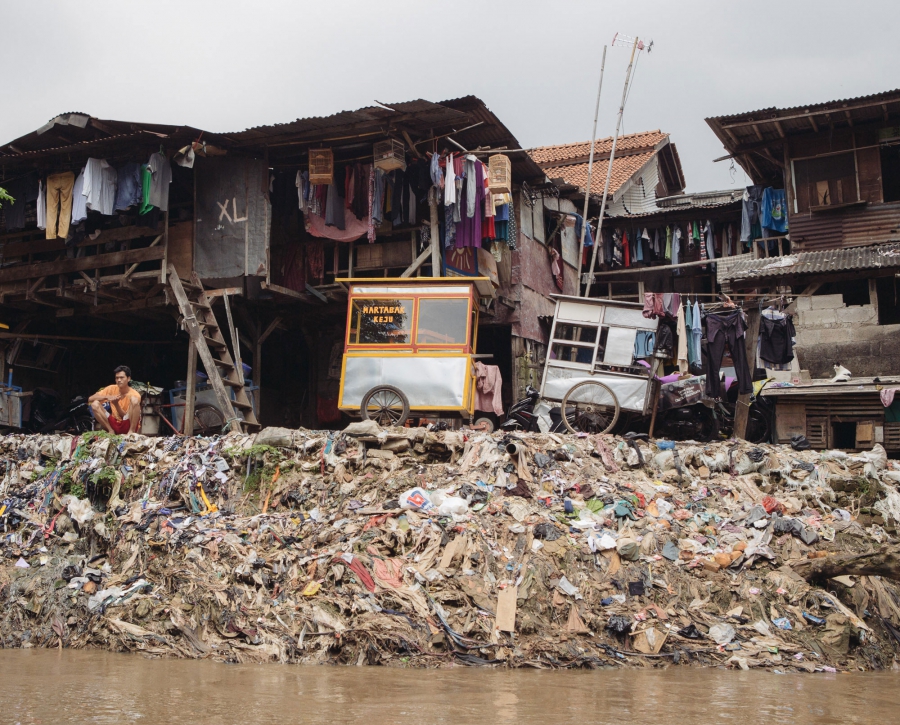 Slums on the Ciliwung river, one of 13 rivers that flow through Jakarta. Hundreds of thousands of riverside residents are preparing to be evicted as Jakarta's government seeks to restore the rivers' banks to help prevent flooding.

Of course the plan also means demolishing vibrant communities that in some cases have been here for generations, even if many were never quite legal.

Most kampung residents are squatters, although many of those evicted claim they had title to their land, sometimes dating back to Jakarta’s Dutch colonial days.

But Arundhati says the neighborhoods are not only flood-prone, they’re dangerous.

“Removing them and giving them proper housing, I think it’s better for their health,” Arundhati says. “And for Jakarta I think it’s healthier to have a river more managed than before.”

Here, too, though, the flood control plans are meeting with pushback.

Hundreds of families have filed class action lawsuits against their evictions. Some continue to squat in tents erected on the ruins of their bulldozed neighborhoods. There have been clashes with police when residents have refused to leave.

“I can’t accept it. It felt like my heart was torn into pieces,” says a former resident of the kampung named Syafitriani. 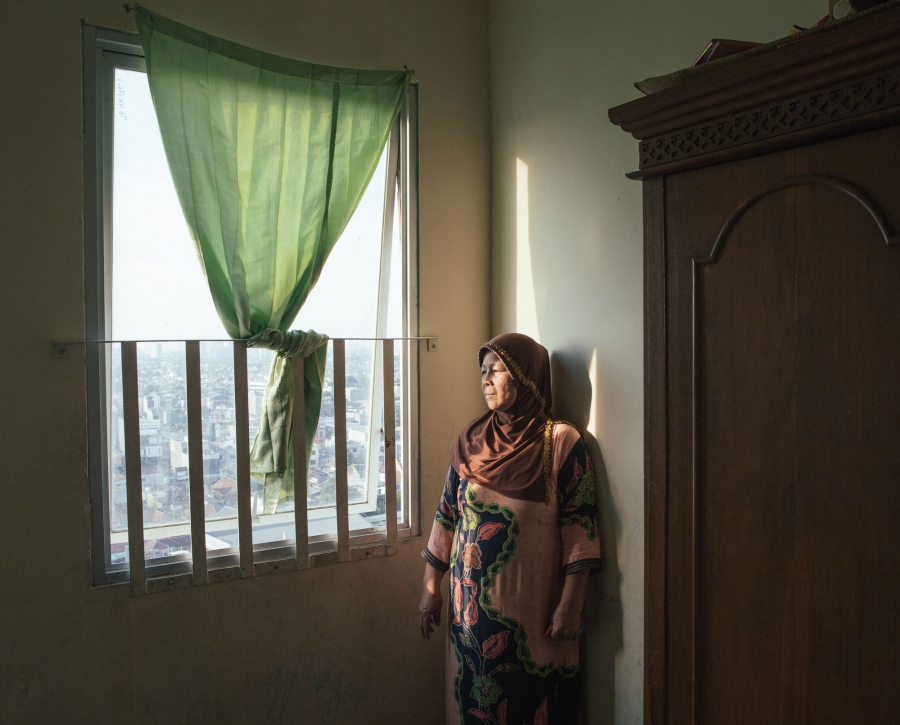 Former riverbank resident Syafitriani now lives in a subsidized apartment after being evicted from her home to make way for flod control projects. She says she lost most of her livelihood in the move and is having trouble paying the rent.

Syafitriani says she was given just four months’ notice before bulldozers arrived one morning at 7 a.m. to level her neighborhood.

She says she owned the land and paid taxes on it for 25 years, and she stayed to protest its demolition.

“I stood in front of my house,” Syafitriani says. “I was crying, shouting.”

More than a year later, she’s still fighting for compensation. She’s moved into one of the new high rises, but she says she makes less money there selling snacks from a cart than she did from her home by the river, and she’s having trouble paying the rent.

To make things worse, Syafitriani says her new apartment leaks. So after being evicted for a flood control project, she still has to deal with pools of water when it rains.

Jakarta Post journalist Evi Mariani, who’s been covering forced evictions since 2003, agrees that there’s a real need for flood control projects in the city, but she says the relocations are also a convenient excuse to make Jakarta more upscale and touristy like Singapore.

“(The residents are) just being called … the great unwashed of Jakarta,” Mariani says. But the new social housing is “not taking into account their needs … They probably don't get flooded anymore, but their life is much harder.”

A lesson for other cities

As for other possible measures that have been floated to help fight flooding in Jakarta — things like replacing open space, restoring the water table, even somehow shrinking the size of the sprawling city — there's little effort to carry those out.

Victor Coenen, the Dutch engineer, acknowledges that the big technical fixes being proposed and implemented to address Jakarta’s massive flooding problems only get at part of the problem. Even the most basic fix — like repairing the existing seawall — disrupts a way of life for kampung residents who actually live on top of it.

“If you strengthen the seawall … these people will lose their livelihood,” Coenen says. “It's not a technical solution that's the problem, it's the social problem, how to (improve things) so they have a future.”

Some Indonesians see Jakarta’s mountain of challenges managing water as a window into the future for many coastal cities around the world as climate change brings rising water over the next few decades and beyond. 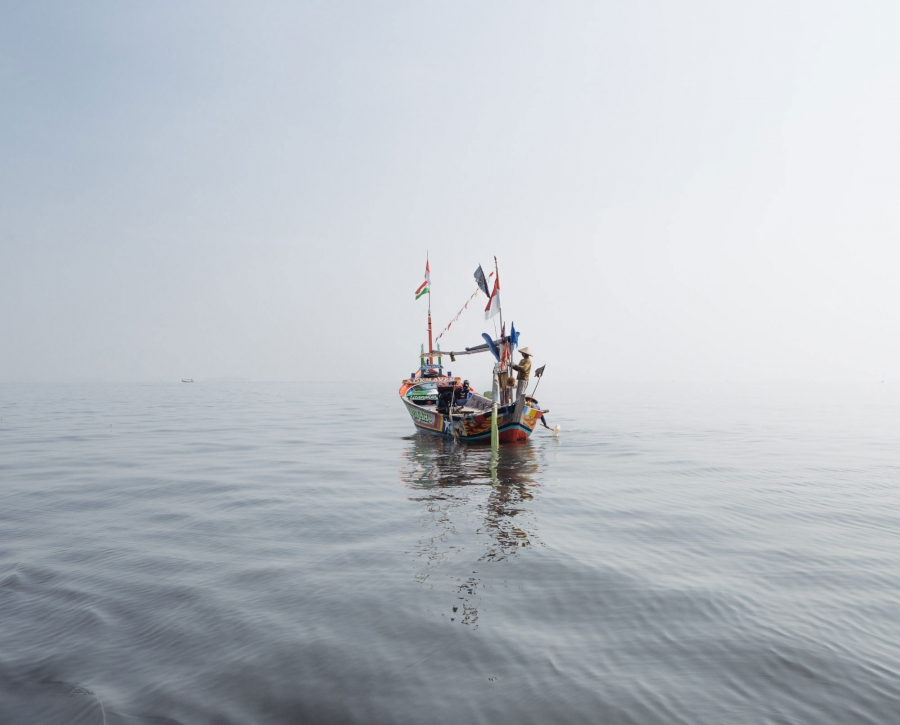 Fishermen in Jakarta Bay. Many fishermen here fear their livelihoods will be disrupted by the government's new plan to buffer the bay from the effects of sea level rise.

Coenen agrees that here in Jakarta, there are already no good choices, especially for the city’s most vulnerable residents.

“The lesson for other cities is act while you still can,” Coenen says, “and then you can avoid these mega-engineering solutions.”

It's a reminder, he says, that while it’s possible to engineer solutions to climate change, the hard part is finding solutions that are fair to the vulnerable people they're designed to protect in the first place.

Also from Chris Bentley: Need the latest news on flooding? In Jakarta, there's an app for that.

Read or hear the whole series: Living with Rising Seas