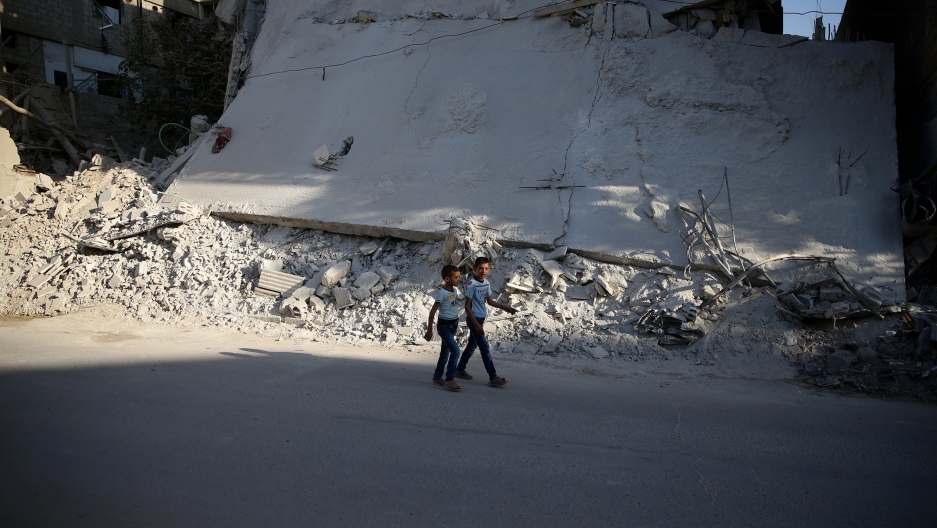 Boys walk near a damaged building on the first day of Eid al-Adha celebrations in the rebel held Douma neighbourhood of Damascus, Syria on September 12, 2016.

A ceasefire brokered by Russia and the United States took effect in Syria at sundown Monday, but there was deep skepticism over whether it would take hold.

The initial 48-hour truce entered into force at 7 p.m. local time across Syria, except in areas held by jihadists like ISIS.

Its fragility was underscored in the hours leading up to sundown, with opposition forces yet to formally sign on and President Bashar al-Assad vowing to retake the whole country from "terrorists."

The deal, announced Friday after marathon talks between Russia and the United States, has been billed as the best chance yet to halt the bloodshed in Syria's five-year civil war.

As well as bringing a temporary end to the fighting, it aims to provide crucial aid to hundreds of thousands of desperate civilians.

Just before the truce came into force, senior Russian military official Sergei Rudskoi said the ceasefire would cover all of Syria except "terrorist targets".

"Today from 1900 [local time] the cessation of hostilities is being resumed across all the territory of Syria," Rudskoi said at a briefing, adding that Russia would "continue to carry out strikes against terrorist targets."

Under the agreement, fighting will halt in areas not held by jihadists and aid deliveries to besieged areas will begin, with government and rebel forces ensuring unimpeded humanitarian access in particular to divided Aleppo city.

The ceasefire will be renewed every 48 hours and, if it holds for a week, Moscow and Washington will begin unprecedented joint targeting of jihadist forces.

World powers have thrown their weight behind this new deal after several rounds of peace efforts failed to end the conflict that has killed more than 290,000 people.

But Syria's opposition and rebels are deeply sceptical that Assad's regime will abide by the truce agreement, and demanded guarantees before endorsing a deal.

"We are asking for guarantees especially from the United States, which is a party to the agreement," Salem al-Muslet from the High Negotiations Committee, the main opposition umbrella group, told AFP Monday.

"We fear that Russia will classify all the Free Syrian Army [rebel factions] as terrorists," as it was unclear how the deal defined "terrorist groups," he said.

Rebel groups on Sunday sent a letter to the US saying they would "deal positively with the idea of the ceasefire" but listed several "concerns" and stopped short of a full endorsement.

"The clauses of the agreement that have been shared with us do not include any clear guarantees or monitoring mechanisms... or repercussions if there are truce violations," they said.

Ahmad al-Saoud, who heads the US-backed Division 13 rebel group which signed the letter, said they had received no response.

Just moments before the ceasefire came into force, the Syrian Observatory for Human Rights monitoring group reported that three people were killed in regime shelling in the rebel-held town of Douma near Damascus.

Questions remain about how the ceasefire will apply in parts of Syria where the jihadist Fateh al-Sham Front, previously known as Al-Nusra Front, is present.

A crucial part of the deal calls for rebels to distance themselves from the group before joint US-Russian operations against it begin.

But Fateh al-Sham cooperates closely with many of Syria's rebels, including the powerful Ahrar al-Sham faction, which on Sunday issued a scathing condemnation of the Russian-US deal.

Assad vows to retake all Syria

"I think that probably at the very beginning of October, [UN envoy Staffan] de Mistura should be inviting all parties" to talks, he said.

Syria's government and its allies, including Iran and Lebanon's Hezbollah movement, have backed the truce.

But on Monday Assad made clear he was intent on recapturing all of Syria.

"The Syrian state is determined to recover every area from the terrorists," he said as he toured Daraya, a former rebel stronghold that surrendered last month after a four-year government siege.

"The armed forces are continuing their work, relentlessly and without hesitation, regardless of internal or external circumstances," he added.

The run-up to the truce has also seen a spike in violence, with at least 74 people killed in strikes on Aleppo and Idlib cities over the weekend.

Aleppo has been divided between rebels in the east and regime forces in the west since mid-2012.

In August, rebels broke a weeks-long regime siege of the east, but Assad loyalists restored the blockade on September 8.

"We hope there will be a ceasefire so that civilians can get a break," said east Aleppo resident Abu Abdullah. "Civilians have no hope any more."