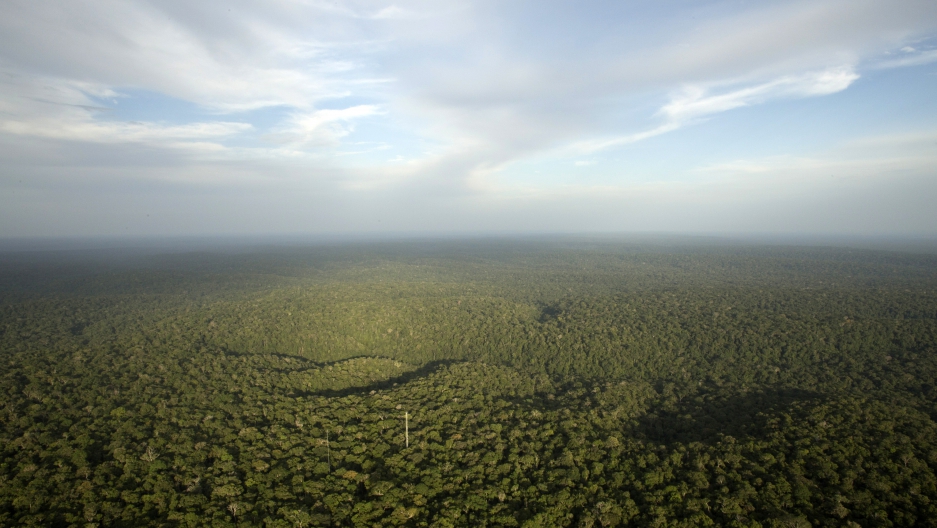 A view is seen from the Amazon Tall Tower Observatory (ATTO) in Sao Sebastiao do Uatuma in the middle of the Amazon forest in Amazonas state on January 10, 2015.

Areas of the world that are untouched by humans are disappearing, with some 10 percent of the planet's wilderness gone since the 1990s, researchers said Thursday.

The study in the journal Current Biology raises concern about these vital areas that form the foundation for ecosystems, particularly in the places that have lost the most, the Amazon and Central Africa.

"We can't restore or offset our wilderness. Once it is gone, it is gone," lead study author James Watson tells AFP.

"It is exactly the same as a species extinction," says Watson, a researcher at the University of Queensland in Australia.

For the study, researchers defined "wilderness" as "biologically and ecologically intact landscapes free of any significant human disturbance."

They made a map of such areas at present and compared it to a map made using the same methods in the early 1990s.

The result showed that about 20 percent of the world's land area is currently wilderness or about 11.6 million square miles.

Most of that wilderness is in Australia, North America, North Asia and North Africa.

Comparing the old map to the new one showed that an estimated 1.3 million square miles — almost 10 percent of the wilderness area — have been lost in the past two decades.

The amount lost is equal to twice the land mass of Alaska, or about half the entire Amazon.

The study did not delve into reasons why, but Watson said it comes down to increased development by the planet's growing human population.

"The amount of wilderness loss in just two decades is staggering," says co-author Oscar Venter of the University of Northern British Colombia.

"We need to recognize that wilderness areas, which we've foolishly considered to be de facto protected due to their remoteness, is actually being dramatically lost around the world."

Watson, who is affiliated with the Wildlife Conservation Society, said time is running out to save the wilderness.

He called on the United Nations and world governments to do more to protect globally significant wilderness areas in key multilateral environmental agreements.

"If we don't act soon, there will only be tiny remnants of wilderness around the planet, and this is a disaster for conservation, for climate change, and for some of the most vulnerable human communities on the planet," says Watson.

"It is really important, and it is profound that we are losing it at such a rapid rate."