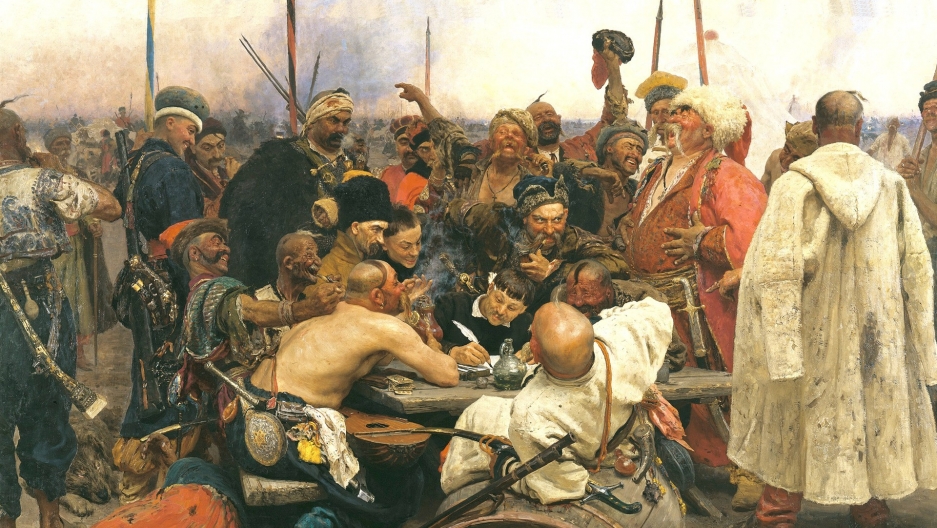 ‘The Reply of the Zaporozhian Cossacks,’ by Ilya Repin. Their inimitable, undiplomatic insults led to war.

The president of the Philippines, Rodridgo Duterte, says he regrets calling President Barack Obama the “son of a whore.”

Well, he regrets at least how the comment was received.

“We regret [that] it came across as a personal attack,” Duterte said through a spokesman. The White House canceled a meeting with Duterte after the outburst.

The Philippines' leader is mounting a controversial campaign against drug dealers and users, which has already led to thousands of extrajudicial killings.

He's famously unapologetic about this policy, or about his salty language — though the dust-up with Obama marks one of the first times Duterte has come close to an apology. The previous targets for his verbal vulgarity have not been so lucky.

He once told the entire nation of Singapore to f*ck off. “You're a garrison pretending to be a country,” he said in November 2015.

He routinely calls United Nations officials the sons or daughters of whores, and he has also said "f*ck you" to the entire organization, in June.

Then last year, he called Pope Francis the son of a whore, after the holy man's motorcade caused traffic jams in Manila.

Plenty of world leaders are known to have been crude and rude in private — off-mic. But Duterte is pretty unusual for a national leader to be so outspoken in public. The job of leading a country is one that statesmen have contrived to invest with dignity and honor since time immemorial.

Diplomats have developed a complex code of behavior over the last few hundred years, with a carefully calibrated set of insults. They might be snubbing each other, making subtle put-downs, delaying meetings, or — God forbid — withdrawing their ambassador (that usually meant war).

Such a code might seem archaic, but it’s built around a system of honor. Until relatively recently, if you went too far, you might find yourself called to a duel.

You can still insult people and countries, but it’s generally done creatively, intelligently and subtly.

One master of this craft was another Filipino, a diplomat named Carlos Romulo. When some US generals made fun of his stature — he was 5 feet 4 inches — he responded by saying he felt like “a dime among nickels.”

Then there was the British general, the Duke of Wellington. He’d never been defeated by the French in battle, so when he met some French generals at the Congress of Vienna — a big diplomatic conference — they turned their backs on him. It was a huge insult that could have led to a duel, but instead the duke said, “Have no fear, gentlemen. I’m not offended. For I've seen your backs before.” Meaning, when they were running away from him in battle.

But then there's the UK's new foreign secretary, Boris Johnson. He’s made a career on the back of his caustic and often xenophobic wit.

Just in May, he was awarded a $1,000 prize from a magazine for composing a limerick about Turkish President Recep Tayyip Erdogan, saying he has sex with goats.

Back in 2007, Johnson wrote a newspaper column titled “I Want Hillary Clinton to be President.” It included the line "she's got dyed blonde hair and pouty lips, and a steely blue stare, like a sadistic nurse in a mental hospital."

Johnson is now head of the UK's once formidable diplomatic corps.

If generalizations must be made, then the most likely politician to be rude and crude in public is the populist, vulgar demagogue, who perhaps likes to play the outsider to the political establishment, and who might perhaps use foul language to help him, or her, appear as one of the people. Elites might look down on this kind of person as not being a real gentleman or a proper lady — ill-bred upstarts.

Soviet leader Nikita Khrushchev was known for such colorful flourishes, as was Benito Mussolini, the dictator of Italy. Napoleon Bonaparte, too.

Russia’s Vladimir Putin once told a routine meeting of leaders of former Soviet states that they should work harder and stop "just chewing snot from one year to the next."

Venezuela’s late leader Hugo Chavez may also fit into this mold. He once famously took the podium at the UN after George W. Bush. He made a show of sniffing the air and saying it still smelled like sulfur — implying Bush was from hell.

An outlier to this set of vulgar ruffians is the famous and outspoken Protestant reformer Martin Luther, who once published a tract criticizing the King of England, Henry VIII, calling him "a pig, an ass, a dunghill, the spawn of an adder, a basilisk, a lying buffoon, a mad fool with a frothy mouth."

In the United States, there aren’t that many examples of egregious public insults of foreign officials, although Ronald Reagan did call Libyan dictator Muammar Gaddafi “the mad dog of the Middle East.”

Abuse in the United States is more liberally applied to domestic political opponents.

Bob Dole once commented on a meeting of three former presidents: “Carter, Ford, and Nixon: See No Evil, Hear No Evil, and Evil."

Lyndon Johnson described Gerald Ford as a nice guy, “but he played too much football with his helmet off."

Going back a couple hundred years, John Quincy Adams wrote that Thomas Jefferson was nothing less than “a slur upon the moral government of the world.”

The business of insults is deadly serious, though. An official might insult foreign leaders or rivals to score domestic political points. But even the measured diplomatic snubs and put-downs of yore can lead to friction, and may well signal a nation’s desire for a fight.

My favorite historic insult is one that was clearly intended to start a war.

In 1676, the Sultan of the Ottoman Turks, Mehmed IV, launched his armies into what’s now Ukraine and southern Russia, home of the famous freebooters, the Cossacks.

One band of Cossacks, the Zaporozhians, received an ultimatum to surrender, which was couched in pompous and flowery language. The Zaporozhian Cossacks responded in kind, rejecting the ultimatum with a stream of insults echoing the sultan’s glorified titles. The insults included "catamite of Tartary, fool of all the world and underworld, an idiot before God, grandson of the Serpent." Those are just the repeatable ones — they also suggested the sultan did unnatural things with his mother and various farm animals.

Needless to say, it led to war.