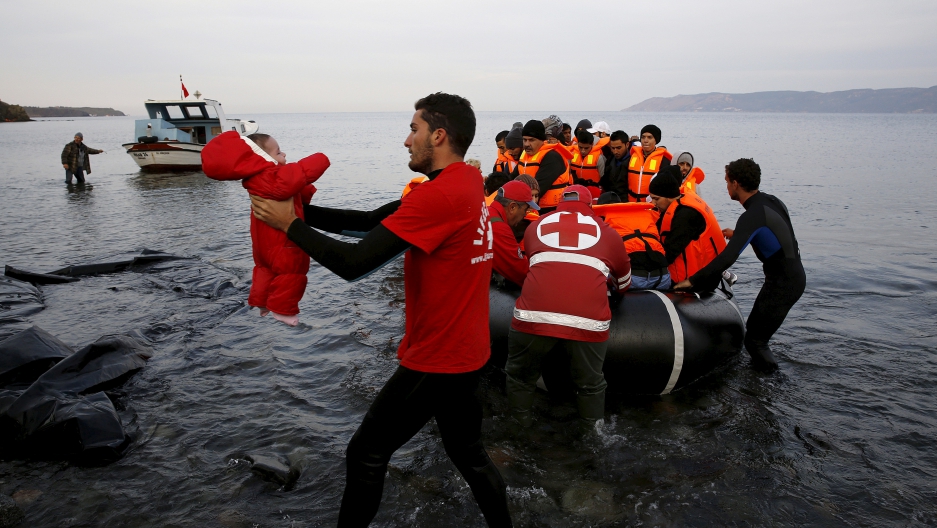 A Red Cross volunteer carries a Syrian refugee baby off an overcrowded raft at a beach on the Greek island of Lesbos on November 16, 2015.

A year ago, the highly publicized death of a 3-year-old Syrian boy sparked outrage across the world and drove home the grim reality of Europe's growing migration crisis.

Germany threw open its borders and volunteers across Europe flocked to train stations and frontier crossings to welcome those fleeing war and poverty.

But a major backlash swiftly followed. The EU's outer borders have since come back down hard, the so-called Balkan migrant route has shut and anti-migrant sentiment has soared.

Here is a recap of key events in the past year.

The photo of 3-year-old Aylan Kurdi's tiny body washed up on a Turkish beach goes viral on Sept. 2, 2015, as Europe faces its worst migrant crisis since World War II.

Aylan is one of some 3,700 people who die trying to reach Europe in 2015, including his mother and his brother, according to the International Organization for Migration (IOM). 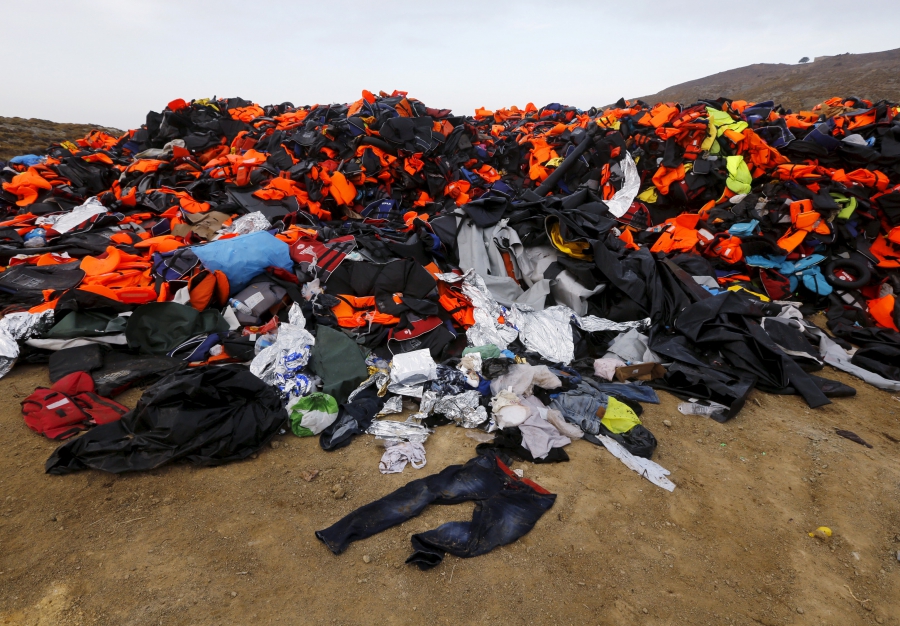 Thousands of life vests left by migrants and refugees are piled up at a garbage dump site on the Greek island of Lesbos, on October 19, 2015.

Even before Aylan's photo makes headlines around the world, German Chancellor Angela Merkel takes the lead on the migrant crisis.

"We can do this," becomes her rallying cry and grateful refugees name her "Mama Merkel."

She then presses the EU to adopt a quota system to share out the influx throughout the bloc — without setting a limit on numbers.

Britain and France make modest pledges to accept 20,000 to 24,000 Syrian migrants each over several years.

But several countries such as Hungary, which lies on the Balkan route to northern and western Europe, resist.

Back to border checks

Criticism of Merkel's open-door policy grows within her own conservative party.

In 2015, around 1 million migrants reach Germany, setting a record for the nation. 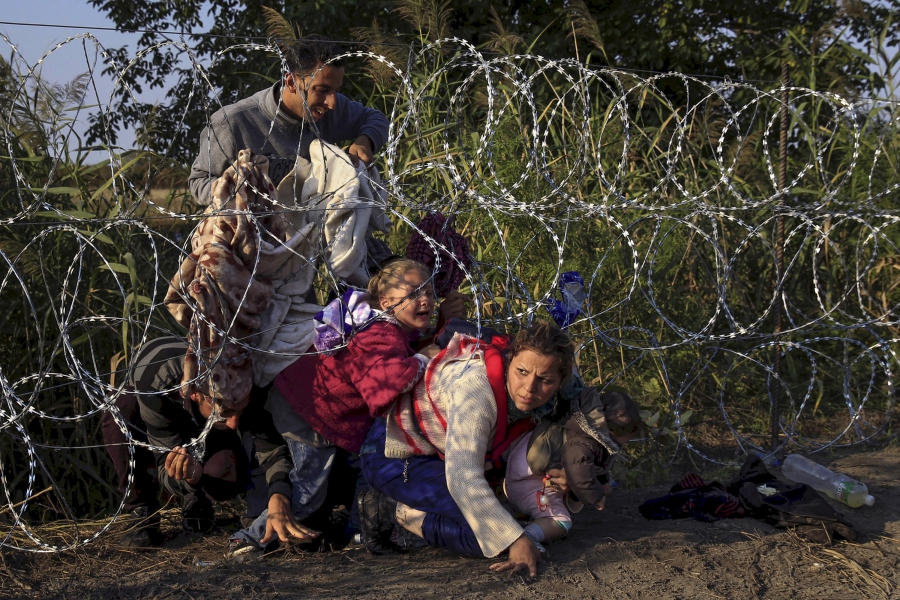 Syrian migrants cross under a fence as they enter Hungary at the border with Serbia, near Roszke, on August 27, 2015.

The Czech Republic and Slovakia follow Germany's lead and reinstate border controls, while Hungary builds a reinforced fence on its frontier with Serbia.

Hungarian Prime Minister Viktor Orban pushes through a law punishing "illegal border crossing" with prison terms of up to five years and scheduled an October 2016 referendum on the disputed EU quota plan.

More than 821,000 travel through Greece, with the vast majority making the perilous journey across the Aegean Sea in rickety, overcrowded boats from Turkey's shores.

Most of the others make their journey from Libya to Italy — a much longer, far more dangerous route. 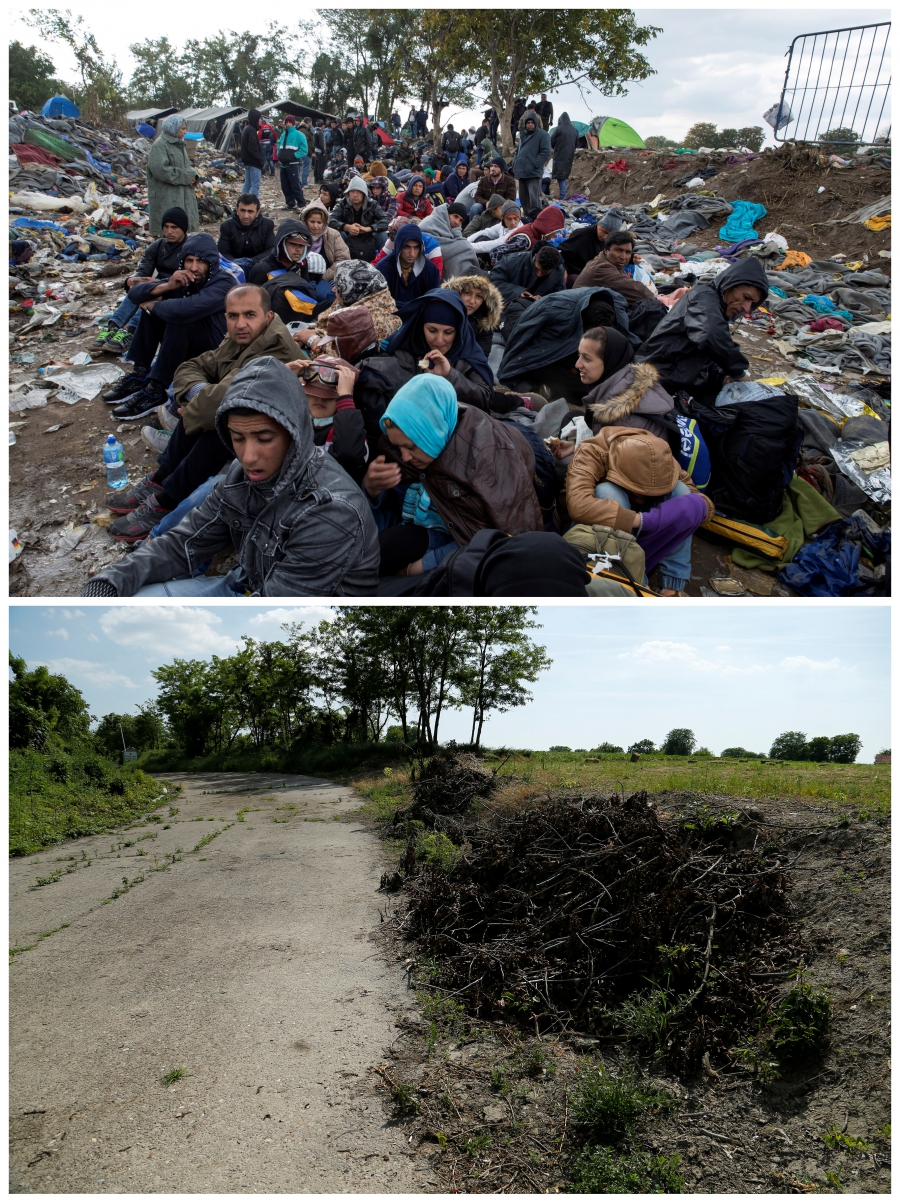 A combination picture shows migrants sitting along a road as they are waiting to cross the border with Croatia near the village of Berkasovo, Serbia October 21, 2015 (top) and the same location on May 27, 2016.

In March 2016, the EU and Turkey sign a controversial deal aimed at stemming the migrant flow.

In exchange, Europe promises Turkey visa-free travel, accelerated talks on EU membership and $3.4 billion in aid to help millions of migrants stuck there.

The flow to Greece drops sharply as Turkey boosts its coastal patrols.

It shifts to Italy, where more than 100,000 migrants have arrived so far this year.

But fears are growing that the pact with Turkey may collapse as rifts deepen with Ankara over its post-coup crackdown.