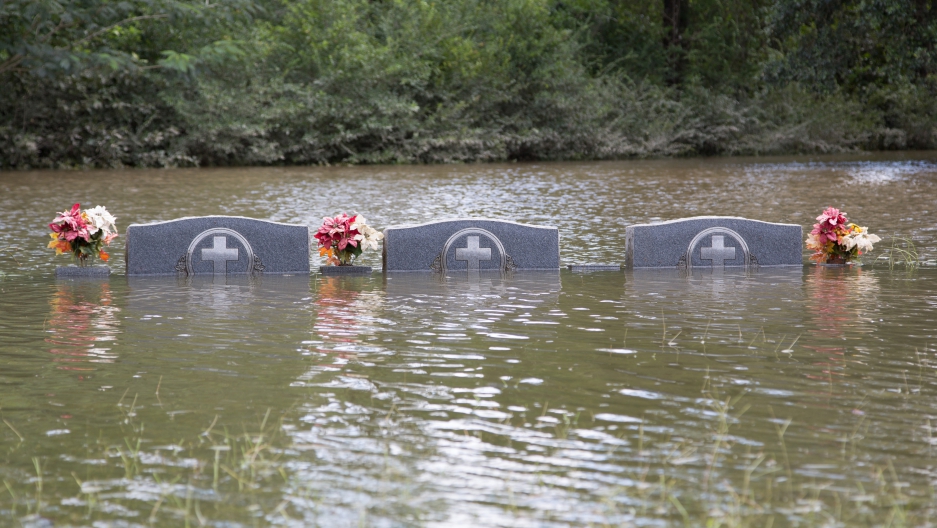 Floodwaters recede from a cemetary in Greenwell Springs, Louisiana on August 14th. More than two feet of rain fell on parts of the state in just a few days, flooding out roughly 40,000 homes and killing more than a dozen people.

Forty thousand homes damaged and more than a dozen people killed by torrential rains in Louisiana.

Blistering temperatures in the Middle East.

Continuing fires in California, fed by five years of drought.

All this extreme weather around the world just this week has a lot of people again pointing fingers at climate change — not surprisingly, since July was the hottest month on record and the planet seems headed for its third record-hottest year in a row.

But you can't automatically say climate change played a role in any particular weather event.

"We can say for sure that climate change is already changing patterns of extreme weather events around the world," says Maarten van Aalst, a Dutch atmospheric scientist and member of the UN's Intergovernmental Panel on Climate Change. "It's quite a different thing to be saying that about one specific event." 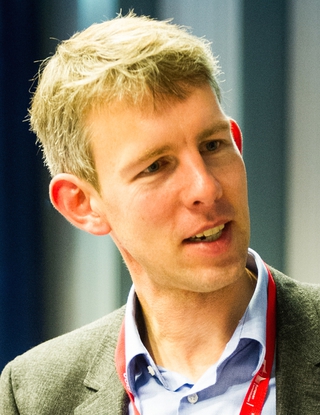 But scientists are getting better and better at being able to do just that — analyze specific extreme weather events to determine whether and how much they were influenced by climate change.

Van Aalst himself is part of a new effort called World Weather Attribution, a group of scientists from all over the world involved in the growing pursuit of looking for climate change influences in specific weather events.

And he says the ability of scientists to do that now is a result of weather trends themselves.

Up until the early 2000s, he says, scientists were still trying to figure out whether climate change was real and whether it was being caused by humans, and the focus was on global average temperatures — the overall state of the climate.

But recent years has seen a big uptick in extreme weather events, and with that has come a different approach to looking at climate and weather together.

Starting with the 2003 European heat wave that killed tens of thousands of people, van Aalst says, "We asked a different question. We didn't ask, 'Is this one extreme [event] caused by climate change?' [but rather,] 'How has the likelihood of this event changed in a warming climate? ... How often would this have happened in a climate that had not yet warmed, and how often does it occur now?'"

World Weather Attribution hasn't yet analyzed the ongoing Louisiana floods, but its results from analyzing other recent events are striking. An example is last year's heat wave in Europe.

"We found that in some cities," Van Aalst says, "a heat wave like [what] happened then is happening up to eight times more now than it would've just a couple of decades ago."

Looking back so we can plan ahead.

Still, it takes a tremendous amount of data and computer processing power to perform these analyses. Which raises the question, if we already know the big picture — that climate change is virtually certain to bring a surge of extreme weather events from floods to droughts to heatwaves to stronger storms — why do we need to expend scarce resoures to figure out whether or to what extent it played a role in a particular event?

Van Aalst, who in addition to his academic work runs the Red Cross/Red Crescent Climate Center, says looking back at what's just happened can help us plan for what might be ahead more effectively.

Related: Climate change may soon make much of the Persian Gulf region too hot for humans

"Disasters have always been caused by relatively infrequent weather events," van Aalst says, "and that's probably going to stay the case. But how infrequent they are is changing, and sometimes changing dramatically."

And when a disaster has just occurred, "that's when people are asking the question, 'What should we do differently, and what is to blame for this?' And at that point it's important to understand exactly how the risk is changing... so that we can optimally prepare for the next disaster and make use of the momentum there is right after an event to do better next time."

Van Aalst says having solid data on the influence of climate change on extreme weather events is important for policy makers, but more immediately important for the kinds of impoverished and vulnerable communities the Red Cross so often works with.

In that big climate picture, he says, when people suffer the impacts of disasters "it's often because [of] not just what's happening in the weather, but it's because [of] how vulnerable people are.

"Particularly in the most vulnerable places, in Africa and in Asia, people are seeing that the weather is changing and they don't understand what's happening. And just getting them a bit more information about what it is that they can expect in the future helps them to better cope with what's coming."