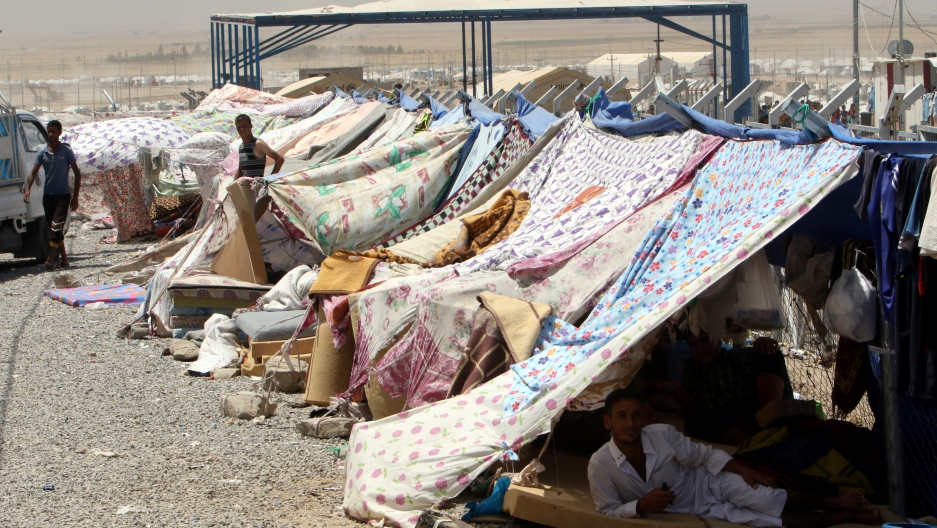 Displaced Iraqi people, who fled from Mosul due to Islamic State violence, gather at a refugee camp in the Makhmour area near Mosul, Iraq, August 6, 2016.

The Middle East is in the sweaty grips of a sustained heat wave.

Kuwait may have set an Eastern Hemisphere record late last month with a temperature of nearly 130 degrees. The weather in Saudi Arabia and Iraq hasn’t been much cooler.

In Baghdad, kids have plunged into the Tigris River for relief while their parents go to work even on days the government declares heat holidays, just to take advantage of the office air conditioning.

But the roughly 3.3 million Iraqis who have been displaced from their homes since January 2014 have fewer options to stay cool.

Related: Climate change may soon make much of the Persian Gulf region too hot for humans

Many of the internally displaced people in Iraq fled their homes in the wake of Islamic State violence with little but the clothes on their backs and identification papers.

They’re streaming into displaced persons camps that suffer from shortages of water and, in some cases, a lack of electricity. They live for months at transit centers meant to be temporary resting stops because there is nowhere more permanent for them to go.

The lucky ones, Gluck said, get a canvas tent that lacks ventilation and can be sweltering in the midday sun.

On a recent visit to a camp for the displaced, Gluck met families sheltering in the communal kitchen, which had plastic sides and a corrugated metal roof.

Gluck said displaced Iraqis are drenching towels and scarves in water and draping them over their heads to stay cool, and avoiding going outside until evening.

In general, Gluck said, “there’s not a lot they can do to escape the sun in a very harsh environment.”

One study published last fall warned that much of the region could be uninhabitable by the end of the century.