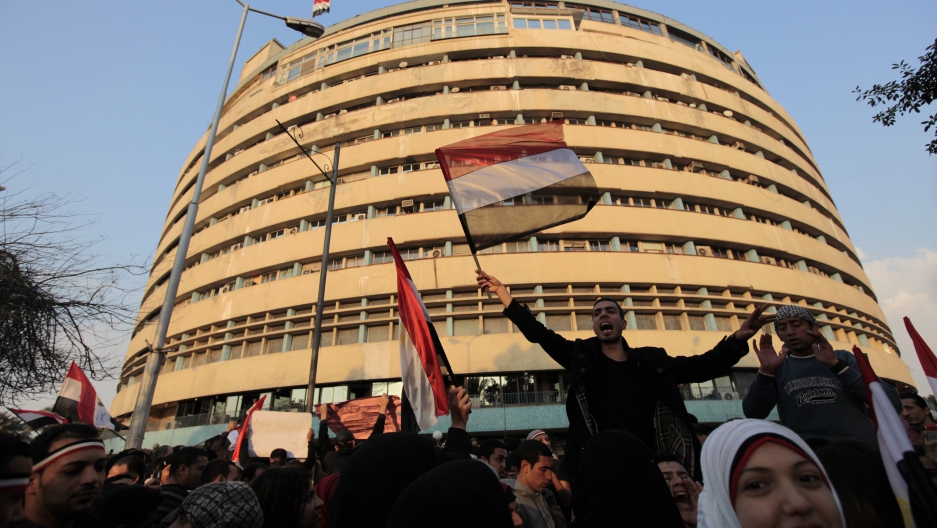 The state TV headquarters in Cairo, shown in 2011 with protesters gathered in front for a demonstration.

Egypt's state-run television has taken several anchorwomen off the air until they lose weight, the broadcaster's chief told AFP, drawing criticism from rights groups but also praise from some commentators.

Egyptian public television, commonly viewed as a staid government mouthpiece, has been struggling to compete with private satellite channels with slicker programming.

Safaa Hegazy, the head of the Egyptian Radio and Television Union which runs state television, said six to eight anchorwomen would be affected by the decision.

The move "is within the framework of developing the broadcaster, in form and content," she said.

Hegazy said she told the anchorwomen "that they can work in production during the period they need to lose weight."

"They can then return to the screen," she said.

The move provoked a backlash from rights groups who labeled it discriminatory.

The Women's Centre for Guidance and Legal Awareness in Egypt called the decision "shameful" and said it was contrary to Egypt's constitution.

"How can there be discrimination against women in an institution run by a woman?" she said.

She said the anchorwomen "are no longer how they were" when hired, suggesting they had since gained weight.

One of the affected women, Khadija Khattab, said she felt slandered by the move.

"Publishing this decision in the newspapers is tantamount to defamation against the anchorwomen," Khattab told AFP.

"We need to know who decides whether an anchor is fit to go on air, and by which standards," she said.

"I agree with this decision because an anchorwoman's appearance is an important criterion," state newspaper Al-Ahram quoted Sami Abdel Aziz, described as a media expert, as saying.

"An anchorwoman's fitness gives an impression of liveliness on the screen," he said.