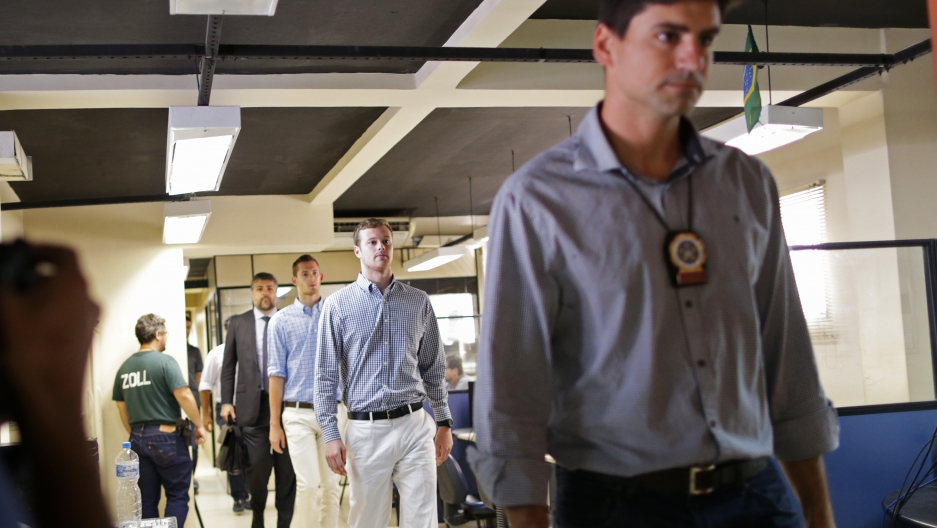 Brazilian officials escort US swimmers Jack Conger and Gunnar Bentz into a police station the morning after they were stopped from boarding a flight out of Rio de Janeiro on Aug. 18.

The details are really fuzzy, but Brazilian police now say the swimmers fabricated the robbery and officials are considering charging the US swim team members for a false testimony and vandalism.

Lochte had told NBC News that he was robbed at gunpoint in the early hours of Sunday after a night of partying.

But at a news conference Thursday, senior police officials gave a very different account. They said the evidence gathered so far indicates that the athletes were drunk and Lochte himself was particularly aggressive. The police say they're still analyzing surveillance video, but it seems probable that one or more of the athletes vandalized a gas station. They were confronted by employees, including one who was armed.

Police say the athletes' taxi driver approached them after seeing comments on social media about the incident, and that one of the swimmer's accounts of the incident confirms there was no robbery.

"In theory, they could be held responsible — by they, I mean one or two or all four of [the US swimmers] — with falsely reporting a crime and vandalism," said the head of Rio's civil police, Fernando Veloso, according to Reuters. "I'm not saying that they are charged right now because of that. We have to finalize the investigation and in theory that could be the case," CNN quoted Veloso as saying.

So, what’s going on here? Why are the potential victims of a crime suddenly being treated as the suspects?

It's illegal in Brazil to lie publicly about a robbery.

On Wednesday, Judge Keyla Blanc de Cnop ordered the swimmers’ passports seized, saying there were inconsistencies in Lochte's and fellow swimmer James Feigen’s statements to investigators. She wrote in a statement that security camera footage of the men returning to the Olympic Village showed them "joking among themselves."

Lochte was already back home in the US. But US swimmers Jack Conger and Gunnar Bentz were pulled off their plane about to head out of Rio Wednesday night. Officials expected to find Feigen at the airport too, but he never showed up for his flight, according to media reports.

Roberto Podval, a criminal defense lawyer in Sao Paulo, tells PRI the swimmers’ real troubles started when they spoke about the robbery on social media and television. Once somebody makes a public statement claiming there's been a crime in Brazil, prosecutors are bound by law to investigate that alleged crime, Podval said. If Lochte had just privately called his girlfriend, say, and told her he’d been robbed, there would be no duty to investigate. But he went on NBC News and Twitter. And at that point, things started spiraling.

One of two things happened here: Lochte and Feigen either misrepresented themselves, or they told the truth.

Brazilian officials are convinced it's the former. “The only truth they told is that they were drunk,” Veloso, the police chief, said on television, according to the Wall Street Journal (subscription-only page).

Lying would have wasted public resources, Podval explained. It would mean taking up valuable police and prosecutor time chasing a false lead. That’s a crime, punishable in Brazil with a fine or a jail sentence of up to three years.

However, Veloso said, "this kind of crime will not lead to their arrest."

But there’s a whole lot more going on here, and it has to do with the particular fabrication Lochte and Feigen are accused of.

Brazil, and especially its celebrated cultural and tourist hub of Rio de Janeiro, has a huge amount on the line with the Olympics. The mega-event has cost the country billions of dollars. Rio state had to get a bailout from the federal government shortly before the Olympics to pay its firefighters, cops and doctors, and to finish new infrastructure. An Olympics security force of 85,000 police and troops were deployed in Rio to avoid big security threats and the type of crime the swimmers — and a number of other athletes — say they endured.

That’s why legal experts say Brazilian investigators are looking very closely at this case. And it’s why they jumped at the chance to discredit the swimmers, said Andre Hespanhol, a criminal defense attorney who works throughout Brazil.

Hespanhol said the case against the US swimmers is really just another example of Brazilian courts meddling with politics. According to him, there’s no reason whatsoever to seize the American athletes’ passports, since the men could be forced to testify in the US. And accused criminals in Brazil have the legal right to refuse to give evidence anyway, Hespanhol said, so taking documents they need to leave the country in this case is wrong.

“When you have a legal system that is just acting as an arm of the state, within a world spectacle like the Olympics, sadly, you will have things like this happening,” Hespanhol said. “If this is happening to international athletes, just imagine what’s going on out in the favelas,” he added, referring to the country's low-income neighborhoods.

In the next few days, the curious case of Ryan Lochte's night out should become clear.

Read more: Here's the story behind those purple circles on Michael Phelps' back