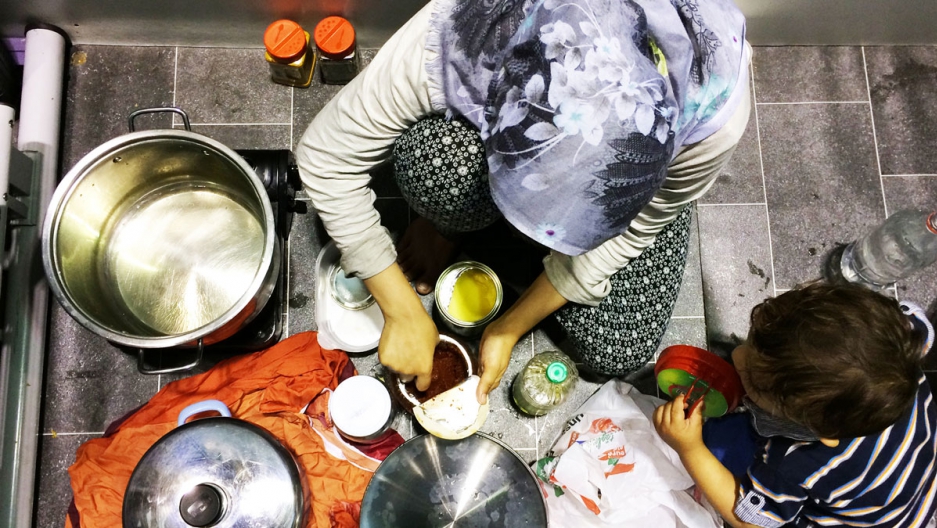 Bushra cooks food for her family inside her temporary living quarters at Berlin’s Tempelhof refugee shelter.

More than 1 million refugees arrived in Germany last year with hopes of a better life. But, like 25-year-old Bushra, her husband and their five children, many are living in crowded refugee camps with little chance of moving into permanent housing anytime soon.

Bushra (not her real name for safety reasons) is now eight months pregnant inside Berlin’s Tempelhof shelter, a former military airport and site of the Berlin Airlift of 1948–49. The shelter is temporary home to more than 1,200 refugees, who spend their days and nights in giant airport hangars.

Bushra and her young children made the long and dangerous trek from Turkey to Germany in January, following her husband, who had come a few months earlier. Her baby is due next month, and she’ll likely have to raise it inside the emergency shelter, with its shared toilets and cubicle-like sleeping spaces. While social workers say Tempelhof is not a place for newborns, there’s no other housing for the family, so they’ll just have to keep waiting. 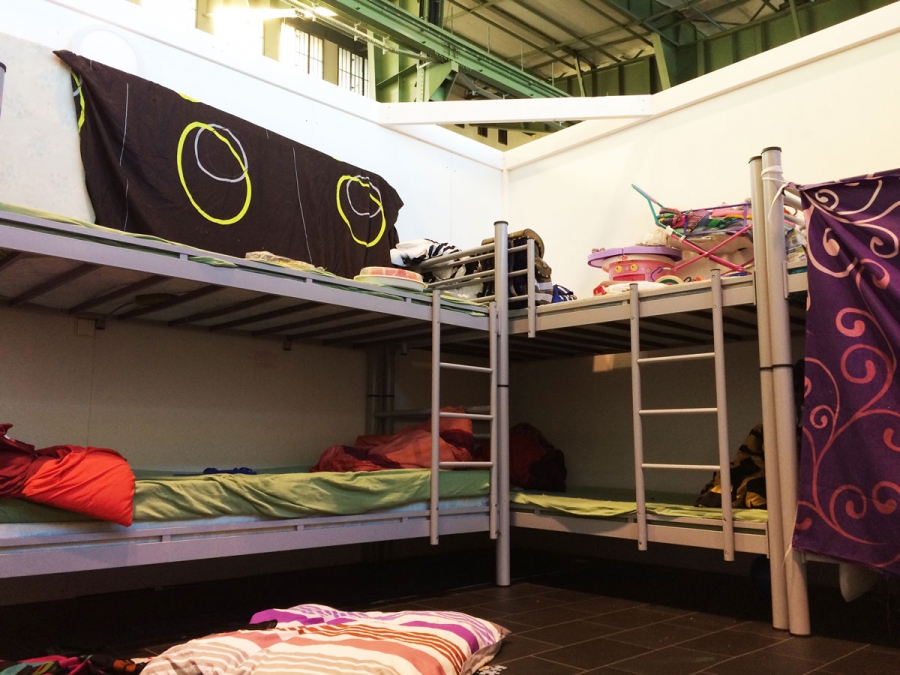 Bushra and her family live in this cubicle-like room with no doors or ceiling.

In her own words, Bushra tells her story of marrying young, escaping crisis at home and her fears about life — and birth — in the refugee camp.

Our house was at the edge of Baghdad, near the fighting in Fallujah. One day, we went out to visit some people. While we were heading there, a rocket fell on our house. We weren’t at home when it happened. But as soon as we returned we saw the rocket had hit our house. It wasn’t safe for the children anymore.

We said, OK, we need to leave, but we had nowhere else to go. So we decided to come here [to Germany].

My husband went to Europe first, and then I came later, traveling with the children. I flew from Iraq to Turkey in a plane, the normal way. From Turkey, we crossed through the sea, and it was like the way of death. I was very afraid of the sea, and I did not think I’d make it out alive. Only God saved us and our kids.

I huddled my kids around me the entire time. I carried the two youngest on my lap, and I kept the older three beside me, so I always had my eye on them. And whenever I sat down, I held all their hands together and hugged them.

My children and I crossed Greece, then Macedonia, Serbia, Croatia, Slovenia, Austria, and then we finally reached Germany. They walked beside me the entire way, and they were always crying. It was difficult, and I had to tell them to be quiet.

I thought I wasn’t going to make it to Germany and I would never see my husband ever again. I also kept thinking that someone could take my kids or it could be dangerous because I’m alone as a woman.

On the way, we always crossed the borders at night, and spent the nights sitting in the street. My kids were only crying, and eventually I cried with them. It’s so hard to believe that we are all finally together.

I’ve known my husband since I was a girl, since he is related to my family. He fell in love with me and waited for me to grow up and finish my studies. I finished high school, and left school after that. He loved me and I loved him back, so I quit my further studies for him and we got married when I was 16 years old. 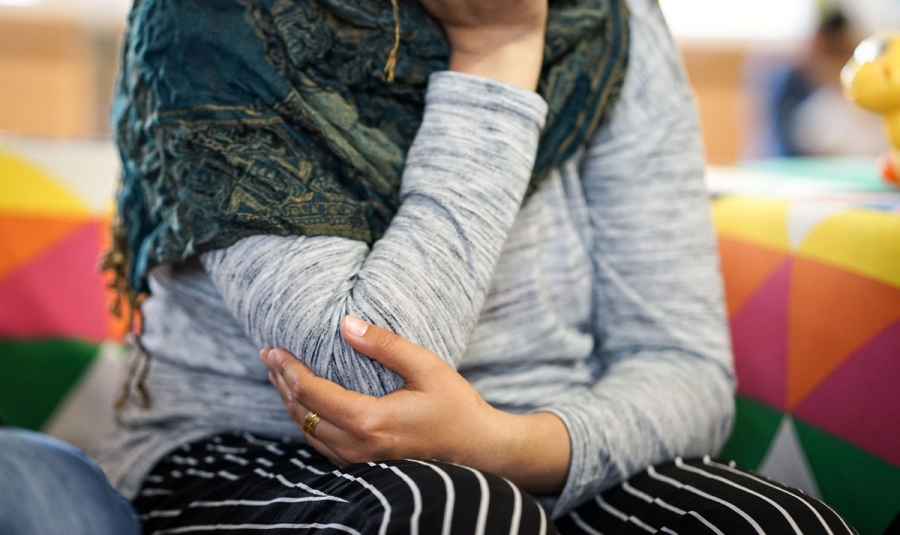 Bushra and her five children traveled by boat to Greece, then made the arduous trek to Germany.

Credit: Save The Children Germany

Life inside a former airport

Everything is different here. It’s exhausting and uncomfortable. The food is inedible. There are some security guards that don’t treat us well. The other kids are rough with my kids. We have no privacy.

We are not living in a place where we can feel comfortable. I feel like we’re living in the Stone Age. For us, it is like sleeping outside. 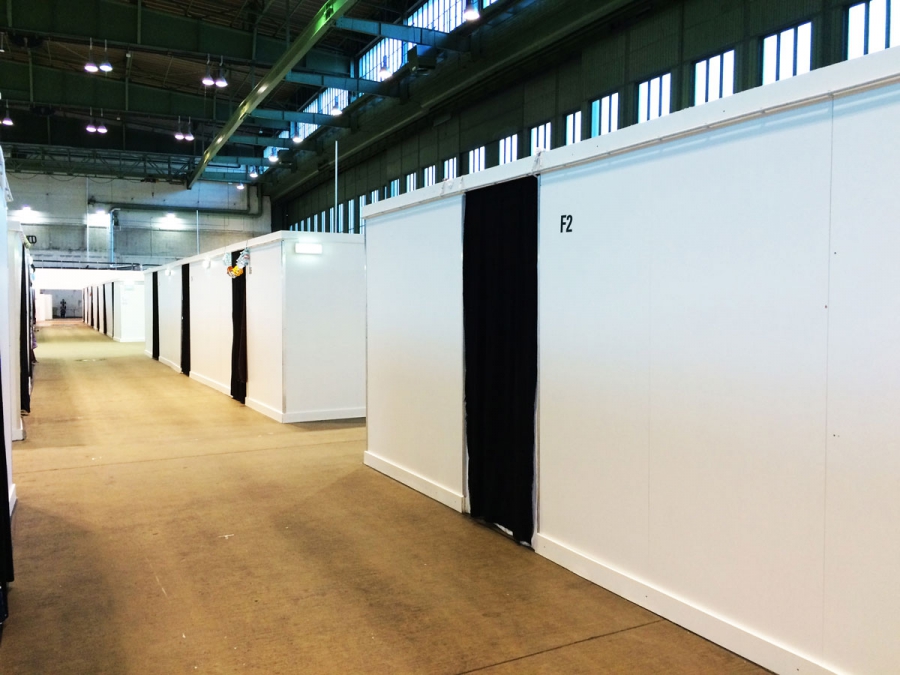 Sometimes, I cannot breathe, since I feel bad and upset. Yesterday night, I felt my soul was not breathing, and I just wanted to go out. I went outside, took off my scarf and sat down in the dark. The air in the place was too heavy.

I have started to keep my kids in their room because of the other children, and I don’t let them play outside. The other kids pushed my daughter, and she was unconscious. And I have a sick son, he’s not doing very well. They keep pushing him around.

All we want is a place we can live in. If there was only a home where the kids could play, rest in, sleep in. Here, there is none of that, there is no comfort.

We were hurting in Iraq, but now we’re hurting maybe even more. We were afraid of rockets. But we were living in a stable house comfortably. Here, there’s no stability; the only benefit is safety.

Before we arrived, we were told that Germany helps families who have children. I didn’t expect that we’d be allowed to stay in such a place.

I’ve been thinking, what am I going to do when I give birth? Who’s going to stay with the kids? Who’s going to go with me to the hospital? I always had my family come with me when I gave birth in Iraq. And I had a place to put my children. But here I can’t do that. I can’t just let them stay in the shelter alone, because no one will care for them.

If my husband cannot come with me to the hospital since he has to stay with the kids, then I will have to give birth to my baby alone. So that’s very, very difficult.

I’ve heard that a lot of people hate refugees and say, “Refugees are not good and we have problems because of them.” But my older kids are excited about school here. When they saw other kids going to school, they were sad and asked why can’t we also go. So, I told them to wait until their names were called. They were really happy when they were finally able to go to school.

UPDATE: Reporter Sonia Narang heard from her translator in Berlin on Wednesday night that Bushra was able to move out of Tempelhof to another refugee hostel two weeks ago. Social workers were able to find her a different shelter and organized her move. Bushra's family now has their own room and a kitchen. She is very happy about the new situation.

An earlier version of this story was published at NewsDeeply's Women & Girls Hub.

Read more: Improvising an Iftar feast in a refugee camp