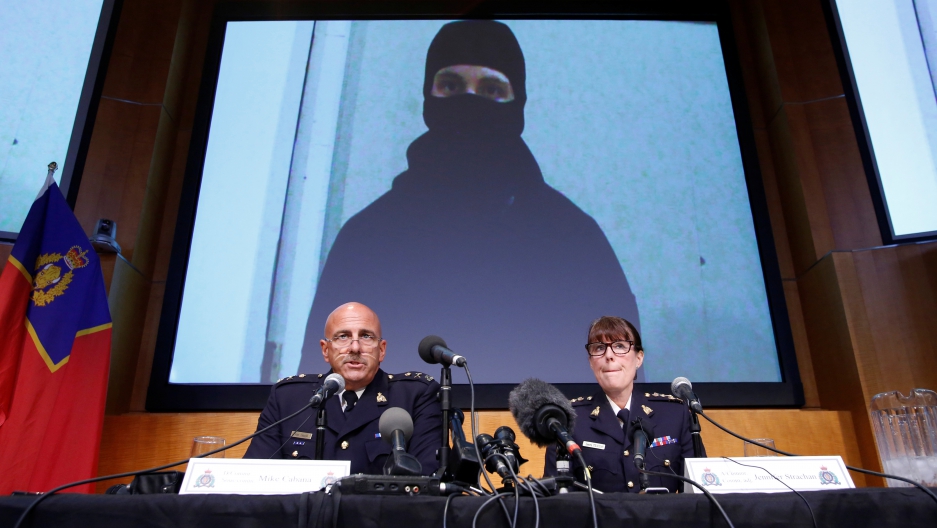 An image of Aaron Driver, a Canadian man killed by police on Wednesday and who had indicated he planned to carry out an imminent rush-hour attack on a major Canadian city, is projected on a screen during a news conference with Royal Canadian Mounted Police (RCMP) Deputy Commissioner Mike Cabana, left, and Assistant Commissioner Jennifer Strachan in Ottawa, Canada, August 11, 2016.

Last week, a young man in a balaclava appeared in a video, pledging allegiance to ISIS and vowing to spill the blood of Canadians. The so-called "martyr video" was quickly picked up by the FBI and shared with the Royal Canadian Mounted Police.

Hours later, 24-year-old Aaron Driver, was dead after a confrontation with police outside his sister's house in the small town of Strathroy, Ontario. Driver had been detained by police previously over his connections to ISIS — and it was those same connections that helped Toronto Star reporter Allan Woods find and connect with Driver, long before he became infamous.

In early 2015, Woods was scouring the internet, looking for someone connected to ISIS that hadn't yet left for Syria, been arrested or killed.

"I wanted to find out what was motivating these young people and why someone would choose life in a war zone over life in Canada," he says.

Essentially, he wanted to hear the other side of the story from someone who could tell it in his or her own voice — not simply put the pieces together from the remnants of abandoned social media accounts.

After some looking, he found Driver's alias, Harun Danyal, and worked backwards.

"It's actually an Arabic play on his first and middle names, Aaron Daniel. That name was easy to produce results in a Google search. It turned out he had a long and fairly elaborate internet footprint," says Woods.

Woods sent a series of cryptic requests to talk, but didn't expect a reply. He says he was shocked when Driver replied and seemed open to the idea.

"I didn't understand what the upside was for him, but I think he is someone who wanted to be understood."

Woods negotiated an interview that lasted two hours and covered his conversion to Islam, his feelings towards ISIS and being on the RCMP's radar.

Woods remembers how Driver said he struggled to give up bacon. He also talked about the way he became known to Canadian authorities.

In December 2014, ISIS released a propaganda video featuring a young Canadian named John McGuire. In the video, McGuire encouraged lone-wolf attacks including using cars as weapons to run people down.

"It was posted on a website and he [Aaron] retweeted it. Someone saw it and reported it and CSIS started poking around," Woods says. According to Woods, Driver said being discovered was liberating.

"He felt that he no longer had to try and hide or seek anonymity. In his eyes he wasn't committing any crime or advocating violence, so he had nothing to hide. He said he was ready to go to prison for his beliefs."

Woods says the person he spoke to in February 2015 doesn't match the man in the video the RCMP played at a press conference last week.

"It didn't square at all with the guy I talked to 18 months ago. The rhetoric, the denunciation — it was very angry. It was a drastic change," he says.

In that conversation, Driver told Woods he felt the two lone-wolf attacks (on Parliament Hill and in St.-Jean-sur-Richelieu) were justified. but Woods didn't get the impression that Driver was capable of organizing an attack of his own.

"The rhetoric and the ISIS influence was already there, but he wasn't an angry individual. He wasn't shouting or spouting the rote propaganda that ISIS is known for," he says. "Instead, he seemed measured and almost reasonable."

This story was first published as an interview on CBC's Day 6.