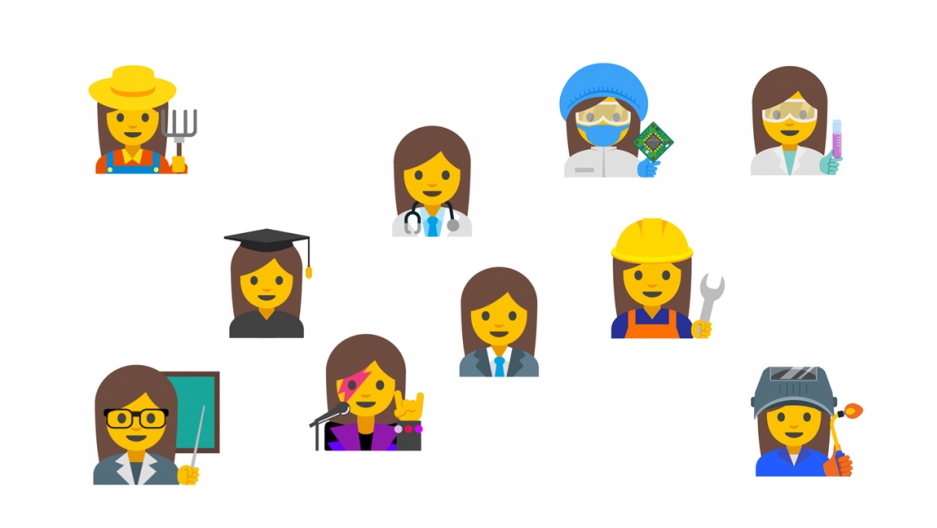 Women, girls and femme-presenting people are more than flamenco dancers and brides. And thanks to a a new update by Apple and a freshly approved emoji proposal from Google, they may finally be able to see that reflected in their keyboards.

They include a doctor, scientist, chef, graduate, coder, factory worker, mechanic and musician. Last month, 11 were approved. The approved emojis will be soon be availble in both masc- and femme-presenting versions, and in all coded skintones.

The only existing non-plainclothes female-presenting emoji at press time.

"The global women’s equality movement is growing, so the time to create these emoji is now," reads the proposal. "We believe this will empower young women (the heaviest emoji users), and better reflect the pivotal roles women play in the world."

The Unicode Consortium is a 25-year-old non-profit organization that works to encode every language on Earth, existing and defunct, so they may be read uniformly across all computers. In 2009, emojis — invented by designer Shigetaka Kurita in Japan in 1999 — were formally adopted and have since seeped into our universal digital "language."

The tiny characters are so ubiquitous and game-changing that they've sparked furious debate among linguists. Some consider emojis a new universal language, others liken the tiny images to body language, processed through the same syntax, grammar and cultural bias attached to the readers' first language. Other still claim that this return to pictographs (hello, ancient Egypt!) is "destroying our language."

These digital hieroglyphics are shaping the way we see the world.

In the UK, emoji is the fastest growing language. Nearly half of all Instagram text contains emoji and — because it's been deemed NSFW due to its, um, shape — searches for the eggplant emoji have been banned by the Facebook-owned social network.

Canadian rapper Drake has Praying Hands Emoji tattooed onto his forearm. Miley Cyrus has the crying cat emoji inked on her inner lower lip. Wikipedia recognizes emojis in URLs. Tears of joy emoji is the most used emoji on Twitter. Last year, a teenager in Brooklyn was arrested after a Tweet with handgun emoji and a police officer emoji was deemed a serious threat. Even ISIS' female recruiters use emojis.

Then there's Fred Benenson's famous crowdsourced all-emoji edition of Herman Melville's classic novel Moby Dick — Emoji Dick. It was catalogued into the Library of Congress. Benenson is also the author of "How to use emoji for men," a 2013 Esquire article that got some people wondering, "Are emojis gender-biased?"

Three years and countless pictoral missives later, everyone is talking about emoji sexism. And for good reason. According to a study by Procter & Gamble, 82 percent of of girls ages 16 to 24 use emojis on a daily basis.

If humankind is, in fact, witnessing the birth of a living, breathing universal language, shouldn't its creators be conscious of any societal implications they're setting the stage for? After all, equality is intentional.

Jennifer 8. Lee, former New York Times journalist and founder of the literary studio Plympton, thinks so. Lee made headlines last year when she lobbied for an official dumpling emoji. It was then that she joined the Unicode Consortium's official Emoji subcommittee. Almost immediately, she began to hear chatter about the instrinsic gender bias of the emoji keyboard.

"It’s extremely limiting when the only professional roles for women are bride, princess and playboy bunny," says Lee. "It becomes part of the coded vocabulary in the global visual language. When you create words and concepts — how people think is shaped by the language. People see reflections of themselves in emojis."

All this in mind, and considering the fact that girls send more than a billion emojis every day, Apple recently announced 100 gender-variant emoji updates, set to debut in September with iOS 10. The new Apple emojis include an LGBT pride flag, single-parent families and a woman with a turban.

Smashing gender roles, Apple will also allow for gender variances across the board. Soon, in Emoji-land, a man will be able to get a massage and a haircut before dancing alongside a friend in a leotard and matching bunny ears. And Emoji women and femmes will be represented as police officers, detectives, weight lifters and cyclists.

These changes have been a long time coming. Earlier this year, Always' Like a Girl campaign took on the emoji fight. More than half of girls surveyed by the company reported feeling that female emojis are stereotypical. Seventy-five perfect of girls expressed hope for more progressive representation, calling specifically for professional female emojis.

In their emoji proposal, the Google employees cite the Always ad, as well as Amy Butcher's op-ed in the New York Times, "Emoji Feminism," as inspiration.

"We are told we are the new generation of American women; no longer a minority, we are, in fact, the majority of breadwinners in American homes," wrote Butcher. "And yet the best we can get is the flamenco."

Google determined its depicted professions by looking at the primary, secondary and tertiary categories that compose the global GDP: Agriculture, Industry and Services. They also took pitches from the #LikeaGirl emoji campaign, a series of suggestions from FLOTUS herself, and existing efforts to promote women in STEM into consideration.

Why does any of this matter? Language shapes the way people experience the world. There are hard-coded gender biases in everyday interactions, right down to spoken and written words used to communicate. If a language is inherently gender-biased, chances are the culture surrounding it is as well.

Last year, a study by the University of Warsaw found that countries with gender-neutral languages have more narrow gender wage gaps. Whether it's the assigment of certain nouns to a gender, a la French or Spanish, or the politically charged practice of encoding the gender binary into entire cultures utilizing separate pronouns for men and women, it's can seem impossible to avoid the gender binary and refrain from reinforcing gender stereotypes.

"From a policy perspective, the major message of our study is that the gender wage gap may be driven by some deep societal features stemming from such basic social codes as language," concluded the researchers. "Education on gender equality is needed at early stages of education, when language characteristics are absorbed by children and translated into social norms."

And it's not just the Romance Languages. In China, the female radical, 女, is used in stigmatized words that, when attributed to women as default, can reinforce the gender binary and infect its speakers with a priori sexism.

"There are different concepts that reflect underlying principles of how a society thinks about themselves," explains Lee, who is first-generation Chinese American. "I grew up reading a pictographic language. The word 'good' is represented by a woman with a son. That is the definition of good. I found that very problematic as a girl growing up. It hard codes the gender bias into the language. 'Jealous' and 'gossip' also have the woman in their symbols."

In 2009, another study asked high-school students to read a passage in English, Spanish or French. The students who read Spanish and French, languages that assign genders to nouns, responded to a subsequent questionnaire with increased levels of sexism, compared to those who read in English, a less gendered language.

This proposed evolution of emoji may seem trivial, even opportunistic. “It’s about time professional women got the same distinction as cartoon saxophones," The Onion chimed in in the spring. Fem-vertising, is very real, after all, and every corporation seems hell-bent on empowering women and commodifying equality, just to sell them more pink.

But, as emojis quickly become our universal second "language" (64 percent of Millennials communicate with them regularly), it's time to take these little yellow characters seriously. Like Jenny 8. Lee, people all around the world see themselves in emojis.

Just as the feminization of madness affects the way we see and experience femininity, the bride emoji undoubtedly seeps into the subconcious of the men and women using it, affecting who they become, how they navigate the world — what's expected of them.

Gendered digital vocabularies are already so deep in our cultural psyche that we may not even notice the institutional system through which we see the world: A system created by the Unicode Consortium and companies like Apple.

Luckily, with these new updates, there's hope. And the fact that Apple and the Unicode Consortium are breaking down gender roles is huge. Because an invented language in 2016 demands more than the gender binary.

For gender non-conforming and non-binary people, the battle against gendered languages is very visible — and a daily struggle. Generation Z is the most genderqueer in history. Gender matters to them. Asking new acquaintances what pronouns they prefer to go by is commonplace. Boys wear skirts and some girls present as boys. Xe, they, he, she have taken ownership of their sexual and gender identities like no generation before. Queer Spanish-speakers are breaking down the barriers built into their gendered language by replacing the male and female -o and -a ending with a reclamatory -x. Latin-X.

These are the people who need to see themselves in a Graduate emoji. 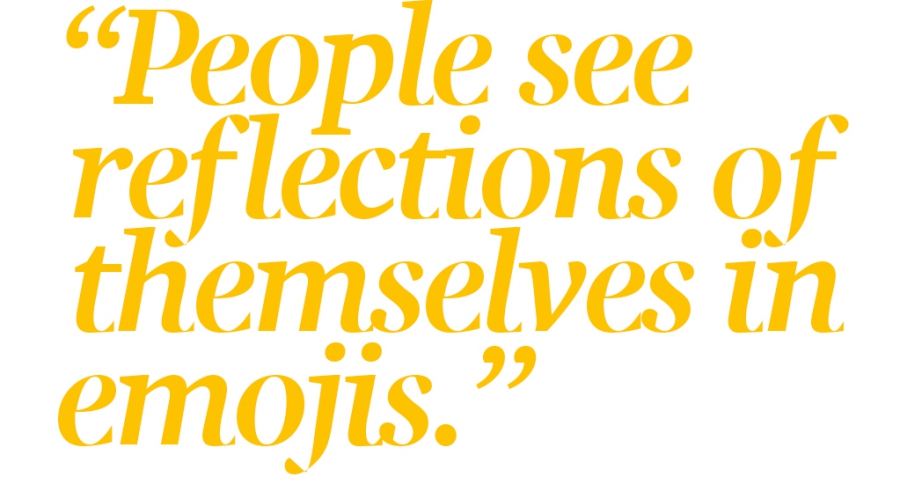 Even the Google proposal acknowledge the importance of moving past the gender binary. "However, as this is not the focus of this effort," the team wrote, "we suggest decoupling the gender-neutral representation of emoji from this proposal. We would encourage other members of Unicode to join us in creating a system of emoji design that can accommodate a broader gender spectrum."

It's time to think about the way we construct our modern modes of communication, and make sure that they enable and empower all unique identities. With the evolution of emojis, people are literally coding representation into their lives.

According to Lee, while most emoji proposals take 18 months to pass, Google's proposed emojis will most likely make their public debut by the end of 2016. After that?

When asked what she thinks the next emoji frontier is, Lee stops to think.

"A woman in a hijab," she says. "Or Superwoman. A female superhero."