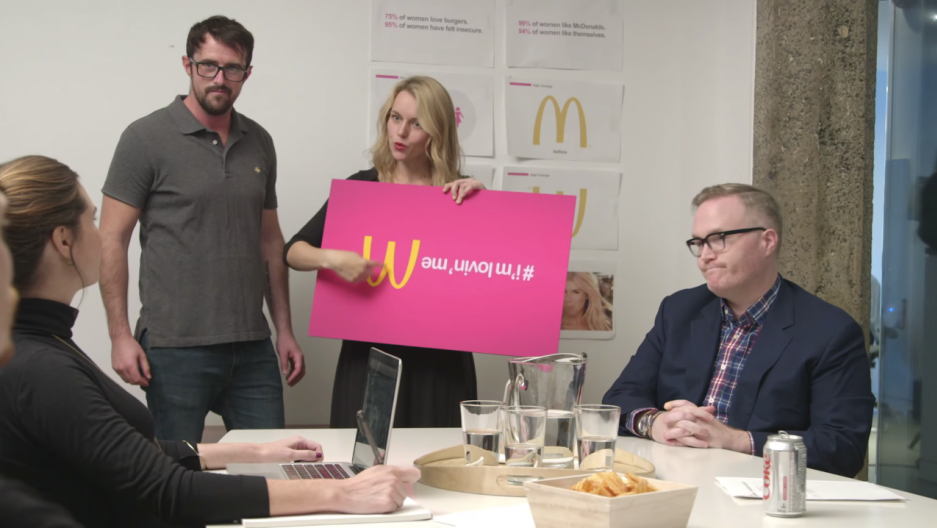 Hey ladies. Feeling down about your weight? Cankles too bony? Can't bake? Fat ears? Well, buy this deodorant. Your hideous body will be forgiven.

Sound familiar? That's because feminism is trending. And, to some advertisement agencies, that means your vagina makes you a prime candidate for empowerment.

As a result, The past few years have overflowed with advertisements centered around the syrupy concept. The same suits who in Don Draper's day sold lipstick to housewives under the guise of keeping her husband happy, are now hocking their granddaughters the same tube of lipstick as a symbol of liberation. What's changed?

We spoke to john st. ad agency associate creative director and art director Hannah Smit about her company's Jane Street project, which lambasts the femvertising movement through the guise of a satirical ad agency. The project includes a couple of videos, a full fledged website and a logo empowerer (it just takes your company logo and turns it pink). It prides itself in finding "how your brand can leverage girlpower to help boost women’s self-esteem, and most importantly, your bottom line."

"The first thing we need to do is identify an insecurity," explains Megan Towers, Jane Street planning director, in the company video. Using the C-LITT model, the fictional Jane Street know what approach to take when empowering women through advertising. It stands for "Core Lady Insecurity to Target."

Across Women's Lives: What is your position at john st.? Tell me a bit about what you do there.

Hannah Smit: I’m an associate creative director and art director. I work on a team with my creative partner, copywriter Jessica Schnurr. Our job is to think up creative concepts for our clients’ products or services. Once we’ve sold an idea, we then execute it across whatever media is best to reach the target — TV, online, print, out of home, stunts etc. As the art director, I’m specifically responsible for overseeing the visual aspects of the executions.

AWL: How did you come up with the concept for Jane Street.?

HS: Our agency, john st., has a history of satirizing advertising industry trends. Over the years we’ve created videos that poke fun at trends that have gone a bit too far, like prankvertising and real-time marketing with our ExFEARiential and Reactvertising videos. This year we had a go at what people are calling Femvertising, or more specifically "pinkwashing” — where marketers use feminist messaging in ways that aren’t actually supporting gender equality.

AWL: How do you personally feel about this trend?

HS: We’re at a moment in history when people and brands are finally comfortable and proud to create pro-female messaging. At long last, feminism is being talked about again and that’s awesome.

While bringing any type of attention to female issues can seem like a positive thing, some people are concerned that inauthentic support for this movement has the potential to cheapen the idea of female power. There are some brands that don’t really lend themselves to the cause of empowering women, and when these companies jump on the femvertising bandwagon, the message can seem at odds with their product. It can be dangerous for the brands behind the token messages, and the feminist movement itself.

AWL: What are some specific femvertise-y ad campaigns you can point out?

HS: There’s a lot of brands that do the mix of feminism and commerce well. I’m a big fan of Under Armour’s recent “I WILL WHAT I WANT” campaign which celebrated female strength in a way that clearly aligns with both their brand and their products. Similarly, Nike has been doing a great job for over 20 years, starting with their 1995 “If You Let Me Play” campaign that brilliantly championed young girls in sport.

Dove’s early work for their “Campaign for Real Beauty,” and specifically their “Evolution” spot, did a great job of shining a light on the role our industry plays in distorting women’s perception of beauty. Unfortunately, a lot of campaigns today seem to have flipped the blame for women’s insecurities onto women themselves. But women aren’t born thinking they are fat or ugly, they are taught to feel that way by the media and our culture. I think it’s important we don’t ignore the role we as marketers have played in the issues females face.

There’s also been an influx of brands using feminism-inspired campaigns that seem to have little to do with their products. Some, like Swiffer’s 2013 ad that used feminist icon Rosie the Riveter in hopes to sell more cleaning products, are clearly cringe-worthy. And resulted in an apology from the brand and the ad being pulled.

Others, like Pantene’s Pro-V “Not Sorry” ad fall into more of a gray area for me. The spot, which features female characters being overly-apologetic was meant to highlight the more female habit of saying sorry. With over 16 million YouTube views, it clearly resonated with a lot of women. But it also left many wondering, myself included, what’s the connection between shinier hair and gender equality?

AWL: What can women who are feeling manipulated by this trend, and may feel like the word "feminist” has been co-opted to sell them things, do to change that?

HS: While I’m sure many marketers have positive intentions when creating these types of pro-female campaigns, the reality is they’re also hoping to improve their profits. Female consumers are smart; they can tell the difference between a brand that’s fully committed to gender equality and one that’s merely co-opting a hot topic for financial gain.

Women who feel manipulated or angered by bad advertising — femvertising or otherwise — should make their opinion heard, either through the power of social media or through the power of their dollars. In North America, female consumers drive 70-80 percent of purchases, so misunderstanding or angering them can be very costly for brands and businesses.

AWL: Who worked on the Jane Street project with you?

HS: I had the help of so many talented people. Our creative directors at john st. helped guide the idea, our producers helped make it happen, and our directors, a crazy talented duo called Air Castle, brought it all to life. After we shot the spot with Air Castle, our editor helped us piece the story together and a number of different post-production partners helped us to get the video looking and sounding great.

A fun fact — 99 percent of the cast in Jane Street, are actual staff from john st. Not actors, but real ad folk who donated their time, and pride, to the project. We couldn’t have made it without them.

AWL: What did you hope to achieve with the ad campaign and do you think that you’ve done it?

HS: As an agency, we make these videos because we think it’s important to keep ourselves and our industry honest. I have no idea if it’s made an impact on the way people think about femvertising. But at a minimum, I hope it’s made a few people laugh.

AWL: What company, in your opinion, is leading with a message of female empowerment in their advertising and also making a difference towards gender equality?

HS: It’s hard not to answer with Always for this question. Their first “LikeAGirl” spot exposed an ingrained cultural stereotype in a way that was inarguably powerful, regardless of the brand’s motives. The starting point for the concept was research results that showed girls’ self-esteem plummets during puberty, which feels like a natural issue for a feminine hygiene product, like Always, to address.

I’m not sure if you can quantify how much of a difference the campaign’s made towards gender equality — but it was clearly successful in striking a cultural nerve and getting people talking about a demeaning term that was previously socially acceptable. It was also the first feminine hygiene brand ever to have an ad play during the Super Bowl, which is progressive in its own right.

AWL: What can companies who may have equal rights on the brain, but whose products don’t really lend themselves to the cause, do to make a difference?

HS: Brands and companies can be a positive force for gender equality without directly calling out feminist issues in their ad campaigns. By casting diverse women from different backgrounds and with different body types, they can help shift our culture’s obsession with unrealistic female beauty. They can also depict women and men in gender roles that challenge the cliché, which can help break down stereotypes. When was the last time you saw Dad demonstrating the cleaning power of Product-X in an ad?

Beyond their advertisements, corporations could design their products and even their companies with the principles of equality at their core. Internal action on issues like hiring practices and equal pay is probably the most powerful way for a company to make a difference for equal rights.

AWL: Our Owning It series is all about women and access to economic power. What has your career path as a creative been like and have you experienced any adversity due to gender inequality in the workplace?

HS: I feel very lucky to have started my career as an advertising creative in Canada. Unlike a lot of the global advertising industry, we have tended to have more women in senior leadership roles. So in my first few years as a creative I had many creative role models to look up to, women like: Judy John (Leo Burnett), Elsbeth Lynn and Lorraine Tao (Formerly of Zig), Denise Rossetto (BBDO), Helen Pak (Havas), Christina Yu (Red Urban), Nellie Kim (Formerly of john st., now at LG2), just to name a few.

In fact, my first job was working as a creative intern for two of these women, namely Nancy Vonk, and Janet Kestin at Ogilvy, Toronto. Nancy and Janet are most famous for being the creative directors behind the Dove “Evolution” and “Onslaught” videos. Early on, they spotted my strong personality — and encouraged me to share my opinions and ideas without fear of judgment. I know other female creatives with similar personalities who, in less nurturing and progressive environments, were cautioned from being too assertive, at the risk of appearing “bossy."

After a short stint in a less gender diverse Australian agency, where I was one of only two females in the creative department, I decided to try to stick to work environments where females flourished. As a result, over the past five years of my career, I do not feel that I’ve experienced any direct adversity due to my gender, beside overhearing the odd off-side joke at industry parties.

AWL: What advice do you have for fellow creative women who want to make a career out of it?

HS: Do it! We need more women in advertising! It can be a very challenging job, especially for women in agencies that skew more male, but it can be incredibly rewarding, and fun, as well.

HS: I think so. Advertising can be a powerful force for both profit-driven companies, and non-profit companies. Droga5’s Equal Payback Project for National Women’s Law Center was a genius campaign created in 2014 to crowdfund the wage gap and rally millennial women to take charge of their financial fates. It’s been viewed millions of times and raised over $100,000 for the client, a leading non-profit advocating for equal pay.