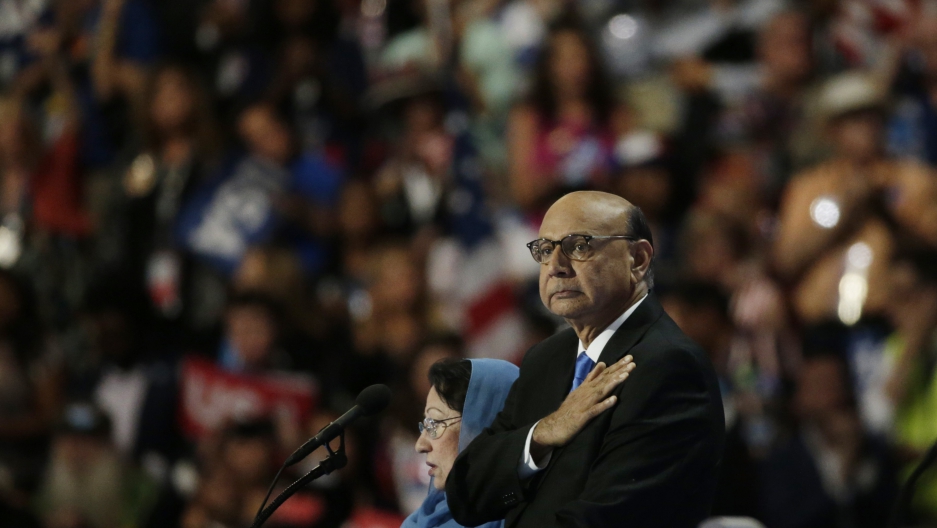 Khizr Khan, whose son Humayun was killed serving in the US Army, brought the crowd to tears and cheers on the last day of the Democratic National Convention.

While pundits pick apart Hillary Clinton's historic acceptance of the Democratic Party's nomination for president last night, there was one speech that was indisputably extraordinary: Khizr Khan brought the passion and heartbreak of a man on a mission.

Khan, with his wife Ghazala Khan next to him, was one of the standout speakers leading up to Clinton's address to the convention.

Khan's son, Capt. Humayun S.M. Khan, was 27 years old when he was killed while serving in the US Army in Iraq in 2004. Humayun is credited for an act of heroism that saved his unit from a suicide bomber. He was posthumously awarded the Bronze Star and Purple Heart.

"Like many immigrants, we came to this country empty-handed," Khizr Khan said. "We believed in American democracy; that with hard work and goodness of this country, we could share in and contribute to its blessings."

"We are blessed to raise our three sons in a nation where they were free to be themselves and follow their dreams."

Humayun, his father said, dreamed of being a military lawyer. "But he put those dreams aside the day he sacrificed his life to save the lives of fellow soldiers."

"If it was up to Donald Trump, he never would have been in America."

Khan was born in Pakistan and immigrated with his family to the US via the United Arab Emirates in 1980. He's part of a growing contingent of Asian Americans who are making their voices heard on the political scene.

Asian Americans and Pacific Islanders are the fastest growing minority group in the country; from 2000 to 2010, the population grew by 46 percent, according to the US Census. The fast-growing populations are mostly in Nevada, Arizona and North Carolina.

An April-May poll by APIAVote and Advancing Justice brings light to this often undercounted portion of the electorate. Asian Americans and Pacific Islanders have been adding an average of 600,000 voters to their ranks per election cycle since the mid 1990s. In the last midterm election, their vote split between Republicans and Democrats. Now, though, their vote skews heavily Democratic.

And it's not just for Hillary Clinton. It's Democratic all the way down the ticket. According to the poll, anti-immigrant and anti-Muslim views are punished severely by this group.

Asian American advocacy organizations, for example, are skewering political ad campaigns in Missouri that portray Asians and Muslims as people to fear.

On Wednesday at the DNC, the Congressional Asian Pacific American Caucus took the stage, led by its chair US Rep. Judy Chu of California.

Chu said there are a record number of Asian Americans in Congress today. "We have gone from being marginalized to becoming the margin of victory in key swing states and districts all across our nation," she said.

Chu also talked about the importance of immigration reform and clearing a visa backlog of people trying to bring their families to the US. "Hillary will fight to clear that backlog so that millions of American families can finally be reunited with their loved ones," Chu said.

There are more than 1 million people waiting for family-sponsored visas from Mexico, and there are just as many from the Philippines, India, Vietnam and China.

Clinton mentioned immigrants or immigration four times in her speech. "Comprehensive immigration reform will grow our economy and keep families together and it's the right thing to do," she said.

Her platform, however, has thus far focused on undocumented immigrants, specifically creating a path to citizenship for many and continuing the Obama administration policy of focusing deportation efforts on violent offenders. Asian Americans have a stake in this issue, as well. Like Latinos, they also often live in mixed immigration status households. Asian immigrants make up 15 percent of the 11 million undocumented immigrants in the US, according to the Migration Policy Institute, and are the fastest growing undocumented group.

Beyond immigration, members of the caucus mentioned Pacific security, the rights of gay, lesbian and transgender people, and education as being important to them.

For Khan, preserving the fundamental rights of Americans is what is at stake.

"Have you even read the United States Constitution," he asked Republican candidate Donald Trump. He then pulled the document from his jacket pocket. "I will gladly lend you my copy."

"Look for the words 'liberty' and 'equal protection of law,'" he said. "You have sacrificed nothing and no one."