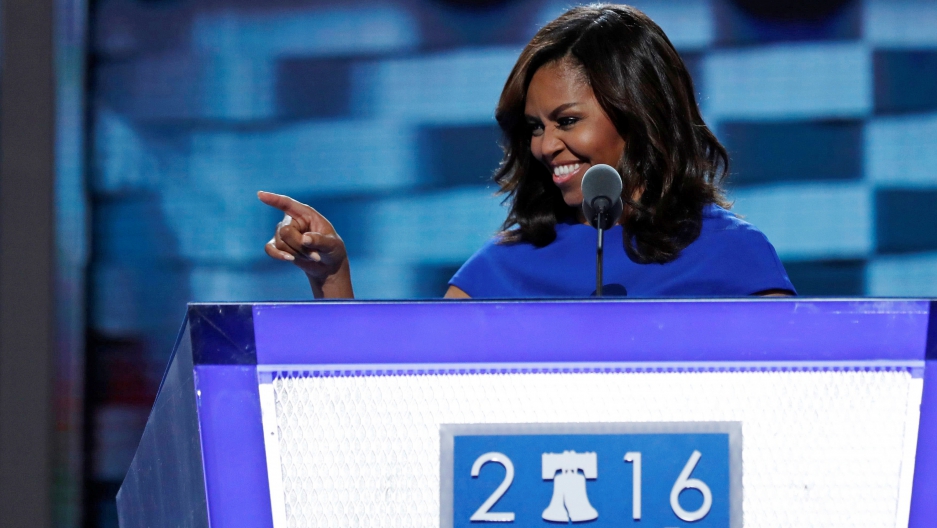 Kate Andersen Brower, a journalist and author of "First Women: The Grace and Power of America’s Modern First Ladies," says it’s because she’s not afraid to take a strong stance.

Take her Let’s Move! campaign, for example. “Most first ladies take up some apolitical campaign. While most think that healthy eating was apolitical, it really wasn’t.”

When Andersen Brower was a White House reporter for Bloomberg News, she talked to executives at big food companies and lobbyists for the food industry. In Washington, Let’s Move! was deeply political, a controversial topic for anyone, let alone a first lady.

“She’s been criticized as being the food police, but she was fighting against these giant corporations and fast-food companies that have responded by offering apple slices with Happy Meals. You can actually see concrete evidence of stepping in the right direction.” Though the program’s ultimate goal to eradicate childhood obesity in a generation is unlikely, its impact is part of the legacy of Michelle Obama.

This legacy started long before her first lady days. Andersen Brower says people forget Michelle was the family breadwinner when Barack was in the state legislature. “She understands what it’s like to parent alone, because her husband was gone so often.”

Andersen Brower believes this period is what has made Michelle so relatable. But despite her groundbreaking initiatives, it’s well-known that the presidential life hasn’t been comfortable for her.

Andersen Brower said she heard this often when doing research for her book. “Friends of the Obamas would tell me how miserable she was in the White House. It was hard for her to give up her career, move to Washington, give up her friends.

“She recognizes the incredible opportunity she has there as the first African-American first lady, but they said she also feels particularly scrutinized by that at the same time.”

Perhaps this is why, on the opening night of the Democratic National Convention, she reminds us that she wakes up every morning in a house built by slaves.

In her speech, the first lady continued: “I will never forget that winter morning as I watched our girls, just 7 and 10 years old, pile into those black SUVs with all those big men with guns. I saw their little faces pressed up against the window. And the only thing I could think was, 'What have we done?'”

In this way, Michelle Obama is not unique in her position. Andersen Brower says the comment is reminiscent of Rosalynn Carter, who remembered her daughter, Amy, donning a bulletproof vest when they were abroad in a violent area. Carter had the exact same feeling: “What have we done?”

Much of Michelle Obama’s speech at the Democratic National Convention discussed this question, which is becoming a central theme for Democrats in 2016. How can we avoid putting our children at risk this election, when the world seems full of violence and upheaval?

Of the speech, Andersen Brower says the 2016 election has activated Michelle Obama in a way that no other election has. “I think this is very personal for her, when it comes to Donald Trump particularly, especially when it comes to questioning her husband’s citizenship. This has sparked something in her that was incredible to watch.”

Michelle was certainly the shooting star of the night, a position she telegraphed with her stand-out line, “When they go low, we go high.”