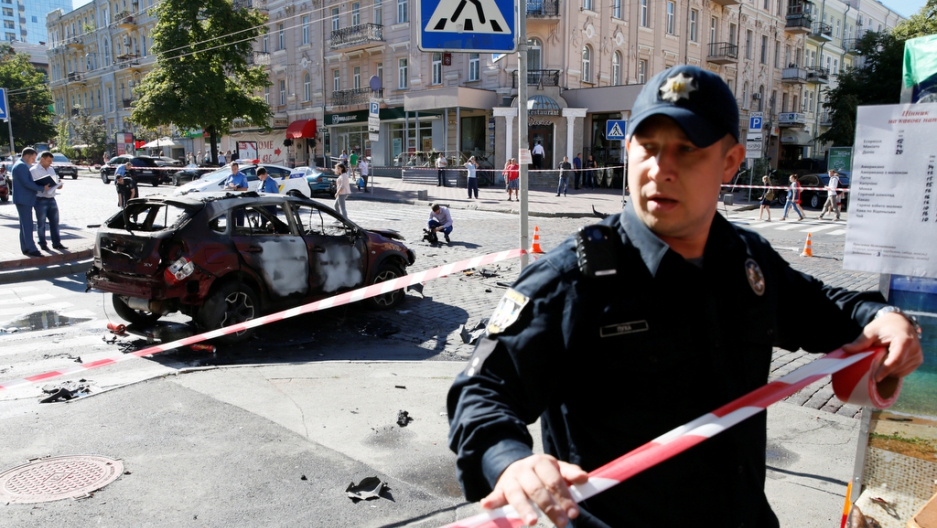 A police officer blocks off the site where journalist Pavel Sheremet was killed by a car bomb in central Kyiv, Ukraine, on July 20, 2016.
Credit: Valentyn Ogirenko
Share

A car bomb in Kyiv on Wednesday killed a pro-Western reporter from a news site whose founder was beheaded 16 years ago after probing the alleged crimes of Ukrainian leaders.

The killing of 44-year-old Pavel Sheremet — a Russian national born in Belarus — added a new degree of uncertainty and fear to a country struggling with a pro-Moscow insurgency in the east and a prolonged stretch of economic woes.

It also underscores the dangers Ukrainian reporters face despite Kyiv's alliance with the West and its historic break with Moscow in a 2014 pro-EU revolt.

Sheremet died when his bomb-rigged car exploded while he was driving to work along one of central Kyiv's cobble-stoned streets.

President Petro Poroshenko immediately demanded that the perpetrators be brought to justice for this "terrible tragedy".

"I am shocked — there are no other words for it," he wrote on Facebook.

The charred remains of Sheremet's car — its doors flung open and the windshield shattered — stood behind a police cordon as investigators worked at the scene and sirens wailed.

A taxi driver who gave his name only as Petro told AFP that the blast was so fierce that "the flames from the windscreen went up to the second floor".

"He was in shock from pain and his legs seemed to be broken," the driver said.

He said witnesses called for an ambulance and started dragging Sheremet out of the burning wreck.

Sheremet was unable to speak but was moaning from pain. It remained unclear at which point he died.

The interior ministry called the killing a "brazen murder" aimed at destabilising the country.

Sheremet wrote opinion pieces and conducted interviews with top officials in which he demanded answers for the slow pace of Kyiv's efforts to stamp out embedded corruption and achieve sustainable growth.

He collaborated with Ukrainska Pravda for four years.

Its founder Georgiy Gongadze was murdered in 2000 after digging into the alleged financial and other crimes committed by then-president Leonid Kuchma — a close ally of Russia at the time.

Gongadze's killing was a national scandal that dragged on through the courts for years and at one point appeared to implicate Kuchma himself.

But Kuchma escaped conviction and no one has yet been charged with ordering Gongadze's death.

"He loved and believed in Ukraine," the news site added in a statement. "That is why he criticised Ukrainian society."

'Life of purpose and integrity'

Sheremet founded the popular Belarussky Partizan opposition website after being detained and kicked out of the authoritarian former Soviet state of Belarus.

He then worked for Russia's ORT television network and at one point was anchor on the country's most watched news show Vremya (Time).

He later joined Russia's state Obshestvennoye Televideniye (Public Television) before resigning after less than a year in protest at Russia's stance toward Ukraine.

Russian President Vladimir Putin's spokesman Dmitry Peskov said "the murder of a Russian citizen and a journalist in Ukraine is cause for very serious concern in the Kremlin".

And Russia's foreign ministry called Sheremet "another victim of the (political) system that now exists" in Ukraine.

The US embassy in Kyiv said it was "shocked and saddened at the news".

"Pavel led a life of purpose and integrity in multiple countries. We respect him as a fearless practitioner and supporter of freedom of speech," the US statement said.

The killing comes as Ukraine continues to battle pro-Russian eastern separatists and struggles to reach stability that could end the political infighting thought brought down past governments.

The 27-month conflict that Kyiv and its allies accuse Russia of backing has claimed nearly 9,500 lives and devastated Moscow's ties with the West at time when the two are trying to find a joint solution to the Syrian war.