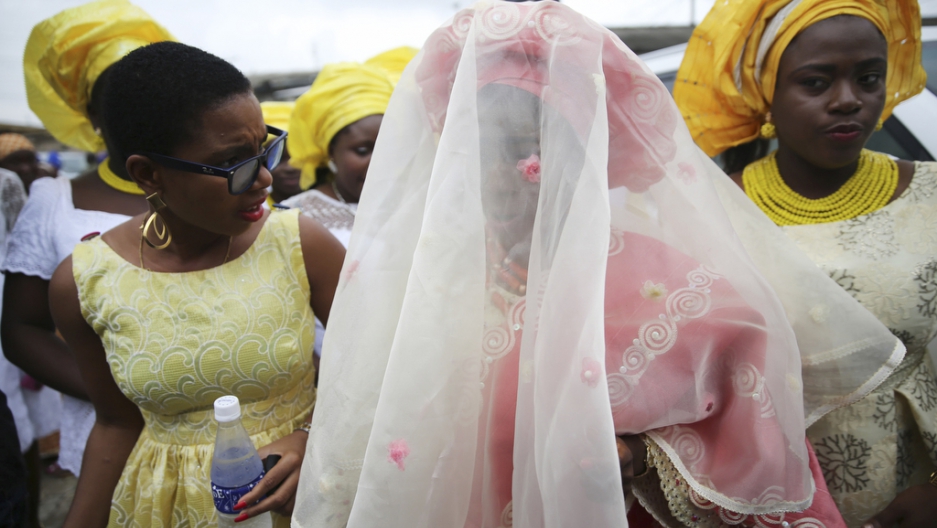 Low global oil prices have hurt Nigeria's economy, taking it to the brink of recession. But the resulting cash crunch has also had a more unexpected effect — on mass weddings.

More than 10,000 women have registered for the state-sponsored program in Kano, said Abba Sufi, director-general of the northern city's "morality police", the Hisbah.

"At the moment we have over 10,000 women who have registered for the mass wedding program and are waiting to be introduced to prospective suitors when the project resumes," he told AFP.

"The women include divorcees and girls of marriage age registered in person and via social media platforms we operate."

The matchmaking program began in 2012 to help divorcees remarry in Kano state, which has the highest divorce rate in Nigeria.

Under the scheme, the state government pays the bride price and provides furniture and household utensils for the newlyweds.

A total of 1,111 couples tied the knot in an elaborate event at Kano's main mosque in December 2013. At the time, the Hisbah said it had arranged 4,461 marriages since the program began.

Nigeria, one of Africa's main oil producers, depends on the sale of crude for 70 percent of government revenue but income has been slashed since prices plunged around the world two years ago.

State governments have struggled to pay public sector wages; the naira has weakened, causing a shortage of foreign exchange, hitting investment and key imports of goods, fuel and food.

At the same time, inflation has soared to nearly 11-year highs, with predictions of more devaluation to come and further rises in the cost of living.

"The cash crunch has compelled us to halt the program, which has resulted in a huge backlog of women intent on getting the right husbands to marry through the matchmaking process," said Sufi.

Hajara Umar, a divorced mother of three children, said she registered to find a husband two years ago but has been frustrated because of the lack of funding.

"We are calling on the authorities to resume the mass wedding. We are not asking for too much, just the basic things we need to start a new married life," she said.

Widespread poverty has been blamed for the rising number of divorces in Kano city and the surrounding state, as well as the decline in traditional marriage ceremonies between men and women.

Kano's economy declined sharply in the 1980s because of electricity shortages, which forced up production costs, high bank lending rates and competition from cheap foreign imports.

More than 400 of Kano city's 500 textile factories were forced to close, leaving thousands jobless and creating the highest unemployment of rate of any of Nigeria's 36 states.

The economic decline has had a direct impact on families, leading to divorces in a mainly Muslim society where polygamy is prevalent.

With no access to education and parental care, children from broken homes have ended up on the street, fending for themselves and also falling into crime and drugs.

"I can't afford to provide the furniture, which is an essential provision for marriage in our culture," said one divorcee, who asked not to be identified.

"I have been divorced for five years and I so much need to remarry. I registered a year ago... it's worrisome the mass wedding has been delayed due to the economic downturn."

The mass wedding project was seen as a solution to the situation and also at preventing Boko Haram Islamists from recruiting disaffected and impoverished youth for their violent insurgency.

The north's conservative culture gives a husband absolute powers in marriage but men have often abused it and divorced their wives at will.

Under the matchmaking project, couples can only divorce with the explicit consent of the state government and the Hisbah. Any man who unilaterally divorces his wife risks going to jail.

"The security the mass wedding program provides for the wife makes many women to prefer getting married through the program because she knows the husband cannot divorce her at will," said Sufi.

To resume mass weddings, the Hisbah wants funding from the private sector and wealthy individuals — but in the current climate that is proving difficult.

"We can't allow the program to crash because of its immense social benefits which makes stopping it altogether unthinkable despite the economic crunch", said Sufi.