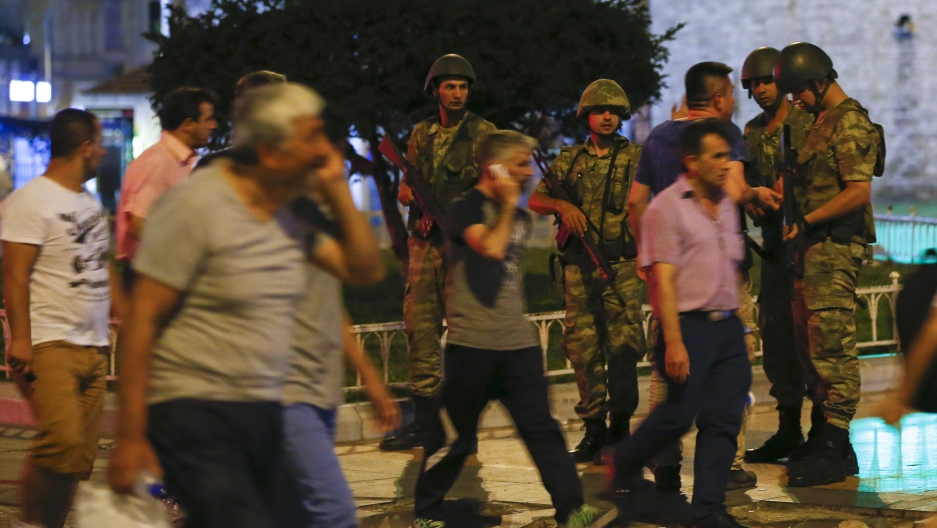 The roaring jets, shooting helicopters and rolling tanks Friday night signaled something Turkey has seen often before — the start of a military coup.

But for teens and twentysomethings, this was something new, says Istabul-based journalist Dalia Mortada.

"Right now — I'm going to have to close my window — there are helicopters flying overhead," Mortada said early Saturday local time in an interview with PRI's The World.

It had been almost two decades since a military coup rocked Turkey, although there were four in the previous 37 years. Early Saturday, however, tanks were deployed outside Parliament and Ataturk airport in Istanbul, where flights were halted. Social media and state TV was disrupted. The military said it was in total control. The longtime civilian leader, President Recep Tayyip Erdogan, was at an unknown location, but called into several TV stations via FaceTime urged his citizens to rise up against the military.

In car convoy in Antalya, MHP folks out with flags, blocking road. Flags, honking, but no police or military. Stopped for now.

Omer Taspinar, a senior fellow at Brookings, said the situation differed from previous coups. "There is little sense of clarity" about who is in control, he said in an interview.

Turkey is deeply politically divided. Erdogan has made many enemies in recent years by cracking down on the press and pushing through controversial redevelopment.

There's a divide between religious and secular Turks. At times, in the past, the Turkish military has sought to push a more secular line. It's not clear how deep the support for the military is among the public. Taspinar had similar questions about military support.

Turkey, a US ally and a NATO member, has hosted NATO troops for decades. Since the Cold War, the US has permitted its NATO allies, including Turkey, to store some of its nuclear weapons. At the height of the Cold War, it included missiles, artillery shells and bombs, where the NATO ally controlled the delivery system, but the US retained control of the nuclear warheads.

Today, though, the weapons program includes only nuclear bombs, which are held at US bases in Turkey as well as Italy, Germany, Belgium and the Netherlands.

Turkey hosts roughly 50 nuclear bombs at the US military base in Incirlik. The bombs are guarded by and remain in the custody of the US Air Force until they, in theory, are released to Turkish air force officials if a major war occurs.

Jonathan Kealing and Matthew Bell contributed to this report.