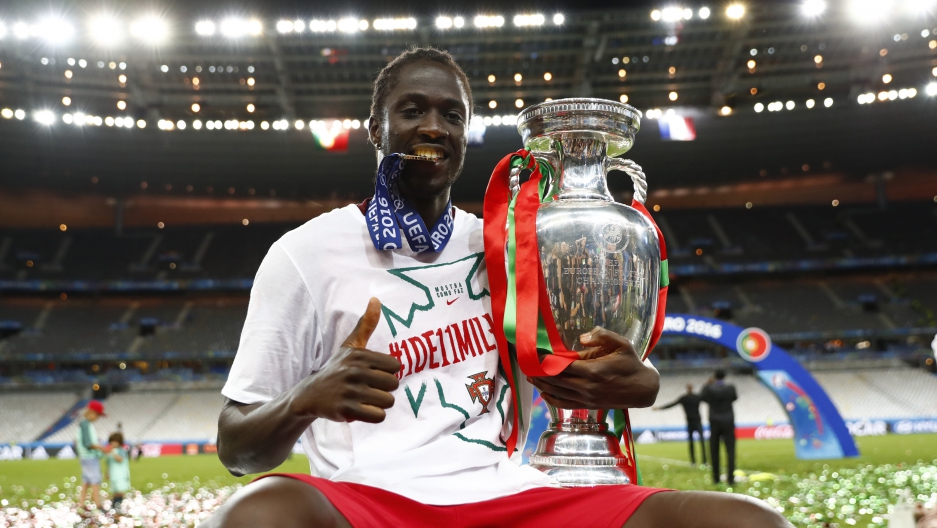 Portugal's Éder celebrates with the trophy after winning Euro 2016. In a year where migrants have dominated European news, it seems appropriate that the continent's biggest soccer goal was scored by an immigrant from Guinea-Bissau.

In Portugal's 1-0 defeat of France 1-0 to win the European Championship, a most unexpected player struck the winning shot.

"No exaggeration, it was the most important goal in the history of Portuguese football," says the BBC's Steve Crossman.

It's a spectacular strike. Just watch:

It came from the foot of Éder Lopes, who is originally from Guinea Bissau.

"He moved to Portugal as a really young kid. Basically, his parents in Guinea Bissau couldn't afford his upkeep. So they had to let him go," says Crossman. "He went to Portugal. He was raised not far from the capital of Lisbon in a foster home. He came through there. At that time, after having such a hard start to life, just to see him succeed in life is enough."

But he did more. He made it as a professional footballer. He hit the day's only goal in the 109th minute, while Portuguese superstar Cristiano Ronaldo stood on the sidelines with an injury. Éder probably wouldn't ever have been in the match without Ronaldo's injury.

"I think it's real fitting because the great son of Portuguese football — the late, great, Eusebio — was born in Africa, too. Mozambique. He was popular there and he really stood up for African football," Crossman says. "So another son of Africa scored an absolutely vital goal."

More about Eusebio: The soccer world says goodbye to a legend

After the game, Éder told Crossman that he's proud of being from Guinea Bissau — and proud as well to play for Portugal.

Rebounding from injuries and tough luck playing in the UK, he sent what would be seen as a prophetic message on Facebook when Portugal played its first match in the tournament on June 14.

"Go ahead," it read. "Underestimate me."