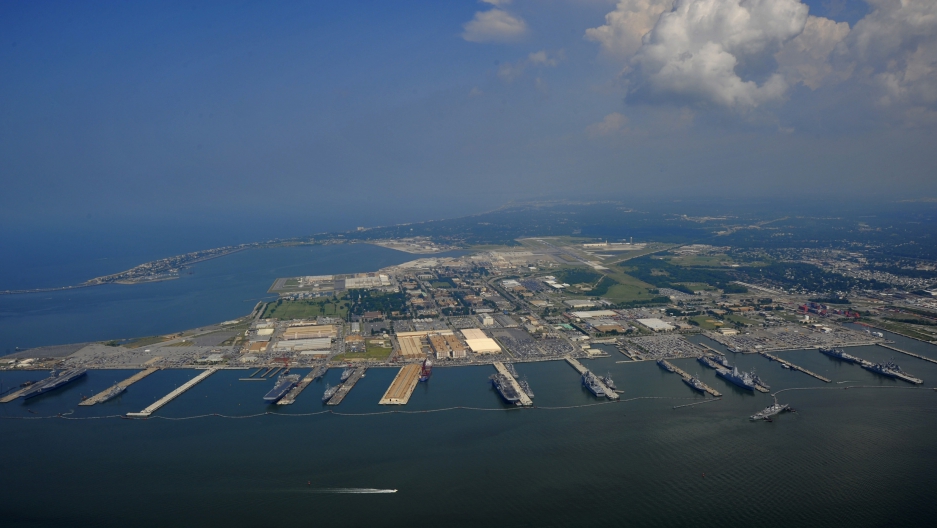 Naval Station Norfolk may experience as much as six feet of relative sea-level rise by the end of the century. Defense officials are beginning to work with nearby city governments to ensure vital infrastructure is protected.

Navy handout obtained by Reuters in 2013.

When US Secretary of State John Kerry wanted to push his country to take the lead on climate change, it was no accident that he chose to give a speech in Norfolk, Virginia.

Norfolk Naval Station is the biggest naval installation in the world. But, Kerry said last November, “the land it is built on is literally sinking.”

That was just weeks before the big United Nations climate change conference in Paris, and Kerry was framing climate change as a national security issue.

“By fueling extreme weather events, undermining our military readiness, exacerbating conflicts around the world — climate change is a threat to the security of the United States,” Kerry said.

Norfolk is the home base for the Atlantic Fleet. Rising sea levels and increasing storm surges there are already having an impact on military readiness.

“It’s not the boats that are the issue, they’re designed to be in water,” said Captain Pat Rios, who until May was the head engineer for the Navy’s mid-Atlantic region. “The issue with sea-level rise is less about the ship, it’s more about the system that supports the ship.”

That system sits on more than 6,000 acres in Norfolk, on a point of land in southern Virginia near where the Chesapeake Bay meets the Atlantic Ocean. 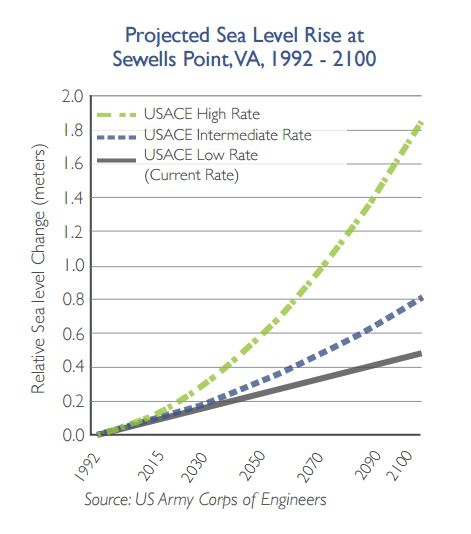 Projected sea-level rise at Sewells Point on the Norfolk naval base.

Chart courtesy of the City of Norfolk.

A combination of sinking land and rising water there means that relative sea level may be up to 6 feet higher by the end of the century than it is today, according to US Army Corps of Engineers estimates. Other projections find different rates of change — some higher, some lower. Rios cites local estimates that project sea levels to rise 2 to 4 feet by 2100.

Rios said the support systems that are used to maintain ships and train and house their crews at the base are already vulnerable to storm surges and flooding.

He showed me an example: a pier for submarines, with thick cables and pipes for fresh water, sewage and electricity attached to the underside, open to the ocean below.

“As the tide rises or there’s a surge, then all those electrical lines, all these utility systems [can be] underwater,” Rios said.

This already happens every couple of months. And when it does, the base has to shut off the utilities to the submarines that are docked at the pier. That delays maintenance work, which in turn impacts readiness. 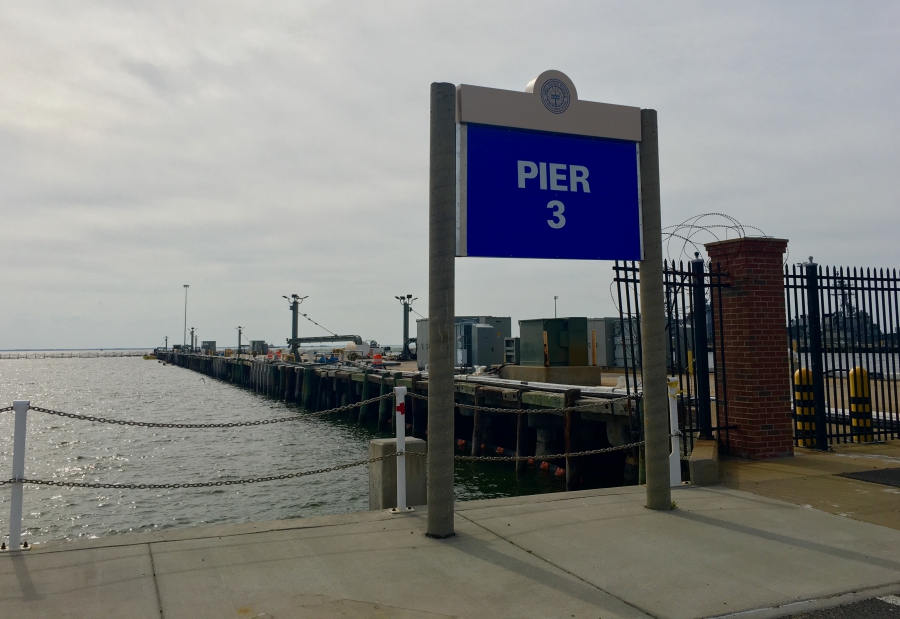 Pier 3 at the Norfolk naval base, which was built in the 1940s, gets overtopped with water during big storms. When that happens, the utilities that run down the pier have to be shut off.

There are other problems: Rios pointed out a parking lot that was underwater during a recent storm, as well as sailor housing and maintenance buildings that are flood-prone.

“You can see how if there were a cataclysmic event, we kind of have everything in one spot,” Rios said.

“This is a priceless national asset that, if you ask me, is irreplaceable,” he added.

Today the Navy has to account for sea-level rise in everything it builds. Among other immediate changes, it has started replacing its regular piers with double-decker versions that have utility cables running much higher above the water.

‘This base is not an island’

But Rios points out that what his colleagues can address at the base is only part of the solution.

“I could make this base impervious to sea-level rise,” Rios said. “I’m an engineer and I believe that all things are doable. But this base is not an island.”

The Naval station relies heavily on neighboring cities for basic services, and access to the base for many of its nearly 70,000 employees. The main road into and out of the base already floods sometimes.

“There’s a significant connective tissue between us and the outlying communities, and so we have to work together to address sea-level rise,” Rios said. 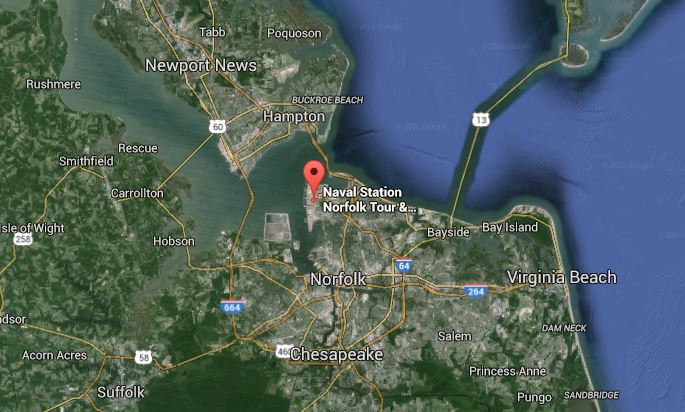 The Department of Defense recently launched a first-of-its-kind joint land use study with the cities of Norfolk and neighboring Virginia Beach to analyze how rising waters will affect necessary services on the base.

The study will ask some basic questions, said Norfolk’s Deputy City Manager Ron Williams: “How do they get electricity, where does their water come from, how do the sailors get to the base?”

The new regional approach to planning for sea-level rise at the base incorporates principles that Dutch advisers have been preaching in their work with the city of Norfolk.

This collaboration represents a big step forward from the Dutch perspective, but getting municipalities to work together is also fraught with challenges.

Among them is the basic question of which sea-level rise projections to use, i.e., how much water to plan for.

“Well, worst case means there’s 8 feet of water at around the turn of the century,” Phillips said.

She said surrounding cities don’t want to worry waterfront residents with predictions of a very watery future that may not come true.

“The most valuable property here is waterfront, of course. And so there’s a real challenge there,” Phillips said.

Phillips leads an infrastructure working group on a pilot project coordinated by Norfolk’s Old Dominion University. It brings more than a dozen cities and towns together to come up with guidelines for dealing with challenges like these.

The hope is that the pilot will provide a road map for naval bases and their neighbors elsewhere in the US, as well as in places outside the country. 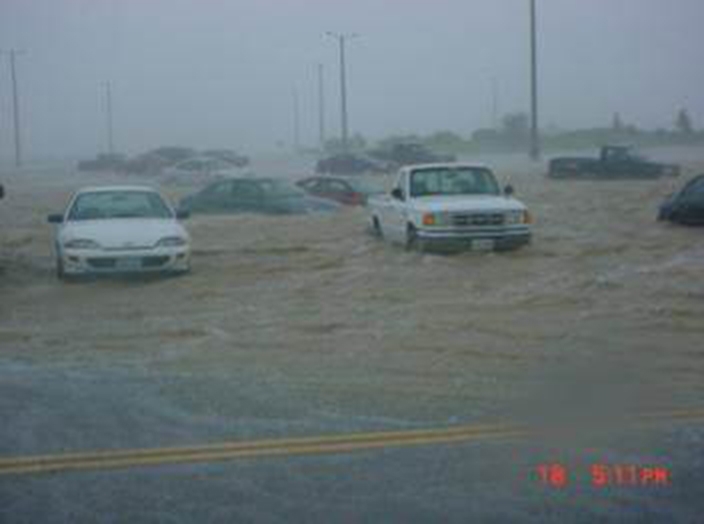 A parking lot at Naval Station Norfolk in 2003 during Hurricane Isabel.

Courtesy of the United States Navy.

Norfolk is among the most vulnerable naval stations, and the farthest along in studying and planning for rising waters.

Globally, the picture is less clear, according to Assistant Secretary of the Navy Dennis McGinn.

“We don’t have that granular information to say that OK, for this naval station in Guam or Japan or Italy or Spain, it’s going to be 2057 when we have to have our piers raised by 2 meters. We’re not at that level,” McGinn said.

But he said the Navy is very focused on the challenge.

“As we learn more, as climate models get better, as we experience various cyclonic activities, we will learn lessons and will apply them.”

The very nature of the Navy, which concentrates assets close to water’s edge, means its bases around the globe are uniquely vulnerable.

A recent analysis found that 56 naval installations could be damaged if sea levels rise a meter (about a yard), which may well happen in the next few decades. The assets at risk in those installations were valued at about $100 billion.

Within the next century, McGinn said tough choices will have to be made regarding how to protect those bases.

“Where there’s built infrastructure that’s fairly low in terms of elevation above sea level, we’re going to have to make some decisions," McGinn said.

"Do we want to put in some sort of sea wall, or do we actually need to move to another location?”

Correction: An earlier version of this story incorrectly stated that battleships are stationed at the Norfolk Naval Station. The US fleet no longer includes battleships.