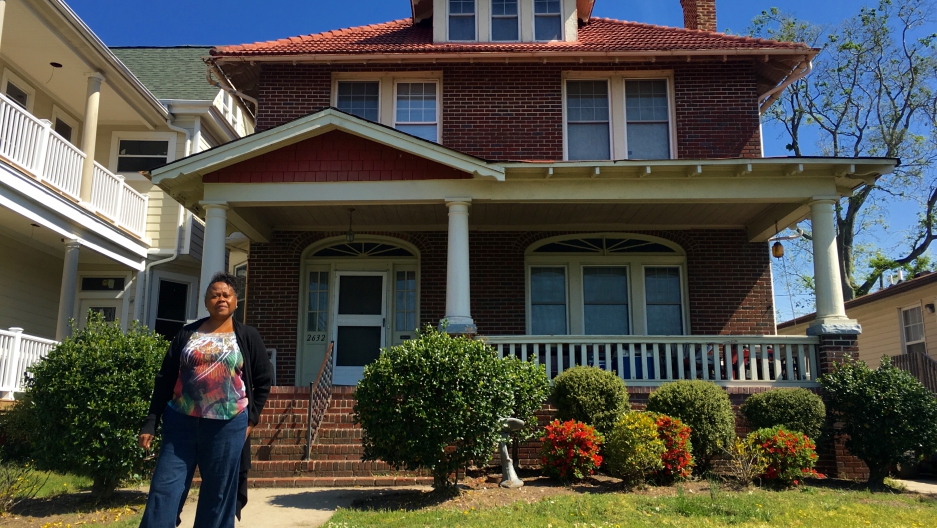 Norfolk, Va., resident Cheryll Sumner in front of her home in Chesterfield Heights, a neighborhood already prone to flooding.

Cheryll Sumner grew up along the water in Norfolk, Virginia. About 15 years ago she moved back to her childhood home to raise her kids.

“It was wonderful that my kids were able to have the same upbringing that I had,” Sumner said, standing in front of her stately brick home in the Chesterfield Heights neighborhood.

Her house is across the street from the Elizabeth River, one of the many inlets from the nearby Chesapeake Bay. On the shore there’s a narrow riverfront park that was a perfect place for her kids to play football and catch crabs.

“The downside is that when we have a heavy rain event, we flood,” Sumner said.

Water surges in from the river, and backs up storm sewers so streets can’t drain.

There are only two roads out of the neighborhood, and sometimes, one of them becomes impassable.

“It gets problematic because we’re just at the mercy of the flooding, sometimes you can’t get in, you can’t get out,” Sumner said.

Lots of Norfolk floods like this. Most residents have stories of unsuccessfully trying to navigate the city during storms, only to give up and return home after meeting too many impassible roads.

Much of the city was built on swamps and streams. The land has been slowly sinking for thousands of years. Now, the water is also rising as climate change affects sea levels. Between the two factors, Army Corps of Engineers projects relative sea level here could rise as much as six feet by the end of the century.

Williams said in addition to rising seas, recent analyses show the kinds of storms that cause flooding are happening more often.

“We saw, in the 2000s, more major coastal storms and hurricanes in that one decade than we had seen in the previous four decades,” Williams said.

Williams said the situation is only going to get worse.

By the year 2100, he said neighborhoods as much as a quarter mile inland could be inundated or need design changes to protect them from flooding.

The city’s challenges are huge, but leaders are being proactive about tackling them by planning now for what is to come at the end of the century. And they’ve turned to the world’s experts for help: the Dutch.

About two-thirds of the Netherlands sits at or below sea level, and dam-builders and water engineers there have been keeping the ocean at bay for centuries. Their expertise is increasingly in demand as coastal cities begin to plan for rising seas.

In the US, the Dutch have worked with New Orleans after Katrina and New York City after Sandy.

They came to Norfolk last summer for a weeklong workshop called a “Dutch dialogue,” and they brought along their relatively new approach.

“Just as in New Orleans, we showed them they didn’t need to fight the water, they needed to find ways to bring it in,” said Dale Morris at the Dutch Embassy in Washington, DC, the co-founder of the Dutch dialogues series.

Morris said this new “living with water” approach is also a big change for the Dutch themselves. Until about 30 years ago, they thought about water the way a lot of US cities still do: by fighting it and keeping it away, building big infrastructure to stop the water. 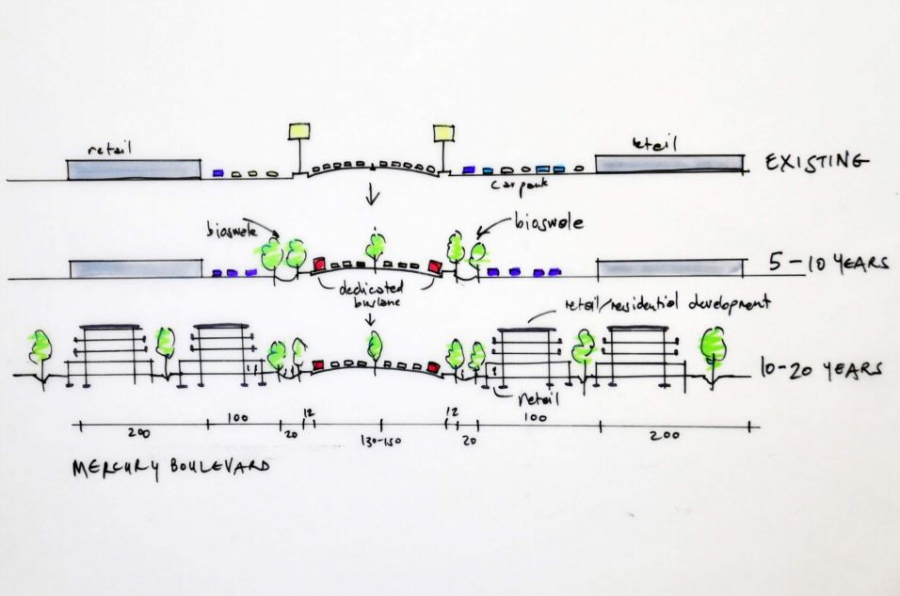 But now, climate change is bringing a new reality.

“What happens with sea-level rise or more extreme precipitation is you can’t build your infrastructure high enough or strong enough in a cost-efficient way,” Morris said.

“So you need to do something else. And one of the ways you do that is by bringing the water in, embracing the water as opposed to fighting it.”

The city walked away from its months of prep and weeklong Dutch dialogue workshop last summer with general inspiration, but also blueprints for specific neighborhoods.

A pilot project for a new Norfolk

One blueprint was for Cheryll Sumner’s Chesterfield Heights neighborhood.

A proposed flood-reduction redesign for that neighborhood includes raising the main, flood-prone road up on a new dike.

“This was the part that excited the Dutch the most, I think,” said Mason Andrews, an architecture professor whose Hampton University students did the early design work for plans that would be fine-tuned during the Dutch visit.

The new road will block storm surges from the bay, and allow rain water to spread out into a marsh to prevent flooding. When weather is calm, tide gates will allow for the normal ebb and flow of water. 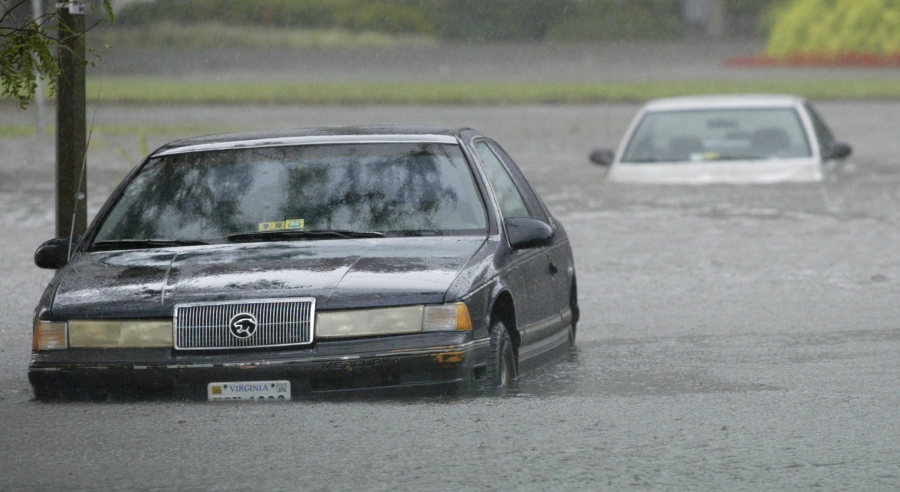 Built on an estuary at the mouth of the Chesapeake Bay, Norfolk is already very vulnerable to flooding. When the waters do rise, as here during Hurricane Isabel in 2003, it can be next to impossible for residents--or rescue teams--to get in or out of many neighborhoods.

This is an example of a more traditional flood-prevention intervention, but the new plans for the neighborhood pair it with nature-based approaches.

“We’ve come to think of every project as having two components, one is barriers to storm water and the other is sponges,” Andrews said, “all of those many kinds of things we can think of to do that we can do to store water until the weather event has moved on.”

The “sponges” in the Chesterfield Heights neighborhood plan include marshes, rain gardens and pavement that allows water to soak into the ground instead of running off.

The “barriers” include a berm along the shore in front of Cheryll Sumner’s house, which already floods sometimes.

That, too, though, has a Dutch “living with water” twist: It will likely have a walking path along the top, and marsh grasses that will be able to migrate up the shore as water levels rise.

Cheryll Sumner said she is happy that this new nature-based approach doesn’t include a big concrete wall along the river.

“If you build a wall, right there in itself you kind of cut off your intimate relationship with the water,” Sumner said, standing in Chesterfield Heights’ riverfront park.

“You’re not going to be able to get as close to the water. I like the way we’re headed now.”

Climate change likely will pose huge challenges to Norfolk for generations to come. But the Dutch “living with water” approach is helping people here deal with those challenges while maintaining some of what they love about their city.

The Dutch approach has influenced the city’s new resilience plan, and will be incorporated into new long-range master planning for the city.

And the “living with water” philosophy has buy-in from the federal government: Earlier this year Virginia won a $120 million federal grant, and almost all of it will be spent on adaptation in Chesterfield Heights and neighborhoods in the surrounding watershed.