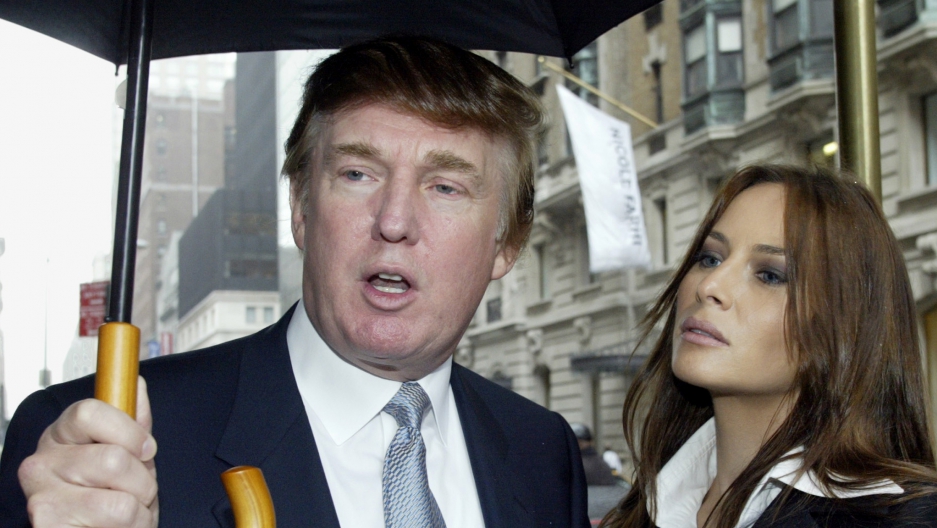 Donald Trump and his then-girlfriend Melania Knauss, now his wife Melania Trump, in New York on May 22, 2003. Melania Trump came the US on a special type of H-1B visa for fashion models, sponsored by Trump Model Management.

“No, I don’t feel he insulted the Mexicans. He said ‘illegal immigrants.’ He didn’t talk about everybody. He talked about illegal immigrants ... Yes [I am an immigrant]. I follow the law. I follow the law the way it’s supposed to be. I never thought to stay here without papers ... I went by the law, and you should do that. You should not just say, ‘OK, let me just stay here and whatever happens, happens.’”

—Melania Trump, in an interview with MSNBC’s Mika Brzezinski, Feb. 2014

This is one of the most fascinating narratives that has emerged in this election cycle from the Donald Trump camp. This story of the “legal immigrant” who comes to America, armed with their non-criminal, non-rapist, non-drug carrying tendencies, works hard and then — because of their deference to the legal system — becomes a citizen in a glorious triumph of legal righteousness.

It has all the simplistic hallmarks of a Trump slogan: It’s pat, easy to repeat and speaks to an "us vs. them" rhetoric where the “us” are the privileged majority who adhere to the law and “them,” the lawless minorities who could be good, if only they learned to do things the legal way.

Technically, I am among the privileged majority who are fortunate enough to have the economic resources to stick to the law. I became a citizen on Friday, May 6, 2016. It’s a journey that took me 15 years and four visas — an F1 student visa, H-1B work visa, H4 dependent of an H1 visa and a green card — to complete. A journey I participated in with absolute and rigid observance to the process.

It was also a tediously long, bureaucracy-ridden journey that looks nothing like that of Melania Trump, wife of the presumptive Republican presidential nominee Donald Trump. She came to this country in 1996 on an H-1B visa, the highly skilled worker visa, through her employment in Trump Model Management. She became a permanent resident of the US in 2001 and a citizen in 2006.

My journey was a bit more circuitous. It began in sunny Dubai, when I stood in line at the US embassy for an F1 visa, the nonimmigrant visa for citizens of a foreign country wishing to study in the US. My goal was simple: I needed to finish my bachelor's degree. It was 2001 and I was 23 years old. I had put college on hold because, after three excruciating years, I couldn’t see myself working any further on a chemistry major.

So I started working as a reporter, writing in India and then trying my hand at theatre reviews in Dubai. Generally, figuring out what I wanted to do with the rest of my life.

I was lucky enough to have the financial resources (thank you, Father) for education in the US to be an option. So I transferred all my courses, applied to multiple universities, got accepted to a handful and found myself at the US embassy, being interviewed by an immigration officer.

Once we were done with the usual questions — what was my major? Where was the school located? What did I hope to accomplish with my degree? — the officer asked if I planned stay on the US.

I was fairly certain that I wanted to return to Dubai once I was done with my degree. Like many of my friends, I wanted the experience of earning a degree from the US but wasn’t quite prepared to stay on in a place so far from home.

Within the hour, I was issued an F1 visa. Within the month, I was in Warrensburg, Missouri, studying. In five years, I graduated with a master’s in communications.

The first five years I lived the US were a true culture shock. I went from the bustling city life of Dubai to the laid-back charm of a rural, Midwestern town. I couldn’t relate to people who told me about what it was like when their towns got their first stop signs. I could, though, completely understand their love for “Friends” and “Fraiser.”

My food was too spicy for my American friends, but we could still wax nostalgic about Nirvana and The Wallflowers’ “One Headlight.” I didn’t get their love for sugary treats but totally understood why the dulcet tones of Ira Glass and the satire of Jon Stewart were so appealing to them.

Technology and popular media allowed me to assimilate faster in a new place but there were still many moments that ensured I felt like an alien. It was the tiny questions that told me that I didn’t belong: "Does your home in India have a toilet?" "Do people in Dubai speak English?" And I came to the sad realization that even if I had enough cultural context to feel at home in a foreign country, others wouldn’t feel the same about me.

Along the way I started a relationship with another immigrant and decided that going back to Dubai or India might not be an option for us. We were from two different countries, religions and cultures and figured America might be a brilliant neutral ground for our budding romance.

To stay in America, I needed a job. Finding a job in any circumstance is difficult enough. But finding a job that will sponsor your work visa is a special kind of soul-searing experience.

You not only have to convince an employer of your worth, but you have to demonstrate that your worth is so high that the company should employ you for a period of time, petition for your work visa and continue to keep you in their employment. Then, to qualify, you have to  hope and pray that the US Citizenship and Immigration Services (USCIS) does not receive enough petitions to meet the 65,000 visa cap during its first five business days of processing applications. (Which it regularly does.) If your application doesn’t make the cut, you have to wait another year to try again.

Once your application is in the system, there’s still a huge amount of chance involved. When enough petitions are filed — for 2017, they took 236,000 H-1B petitions — USCIS uses a computer-generated random selection process (commonly known as a “lottery”) to select a sufficient number of petitions needed to meet the cap.

Paper Please: More stories on the road to citizenship

The USCIS defines the H-1B visa as a program to employ people with “highly specialized knowledge, including but not limited to scientists, engineers, or computer programmers,” most often with a bachelor’s degree or higher. Typically, they issue it for up to three years at a time and offer extensions up to a six-year limit. It is a highly contested visa where you have to prove that the job you are carrying out is “so complex or unique that it can be performed only by an individual with a degree.” Melania Trump had a very specific exception to this rule: Her H-1B3 is part of a program that can admit “a fashion model of distinguished merit and ability.”

Mika to Melania Trump: You're an immigrant. Do you ever think he's gone too far? Melania: I follow the law https://t.co/wa5JTSSMo6

If you are lucky enough to get an H-1B visa, your entire presence in the country is dependent on the favor of your company. You feel paralyzed to go for things that others consider normal — a raise, buying a home, the freedom to pursue jobs or companies you truly want — because you don’t want to go through the rigmarole of lawyers, explaining the H-1B, and filing petitions.

After six years of living on a work visa, I caught another very lucky break. My husband and I — we got married by then — were selected for the Diversity Visa Program. It’s a program of the Immigration and Nationality Act that allows for people from countries with historically low rates of immigration to the US to have a chance to get green cards. 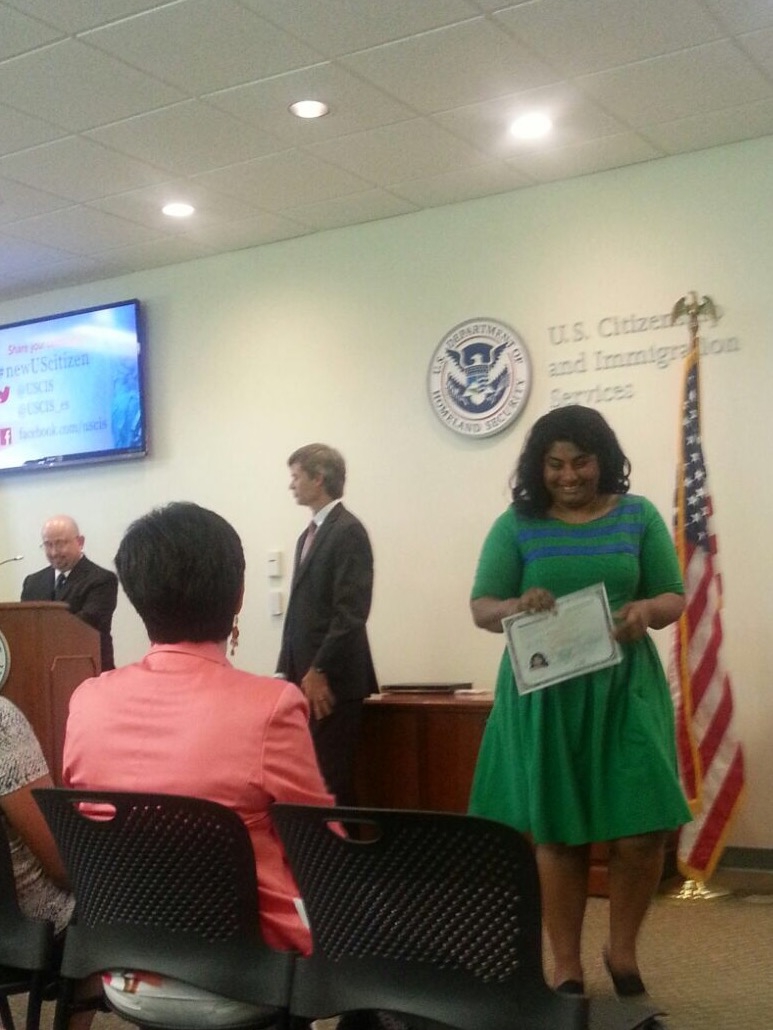 Sheena Koshy took 15 years and four types of visas to get her US citizenship. But she's glad she's taken the oath in time to vote this year.

The thing about life, though, is that it keeps moving, sometimes in very complex ways, as you wait for that elusive visa, that elusive permanence of citizenship. A loved one gets cancer. Job promotions happen. Children are born. Your marriage disintegrates. (That’s what happened to me.)

Also: The US government finally lifts the curse of the 'golden cage' visa

You wait on. And if you don’t catch lucky breaks like I did, well, you make difficult decisions.

This is the fallacy of the Trump narrative. That the benefits are simple and just when you follow the “right” path. That life can be unencumbered if only everybody would just stick to their spaces and follow the letter of the law, that the complexity of any bloated process need not be addressed.

Immigration happens at a far more convoluted pace than the rhetoric of the Trump campaign likes to express. It exists in a complicated space of grey that desperately needs a compassionate overhauling.

It is still gloriously emotional to take the oath, to register to vote, to identify yourself as a member of this or another party. As a person who grew up in three different countries (India, Bahrain and the United Arab Emirates), it was startling to me to realize that America had become home. That the ideals, tolerance and values of this country sit better with me than those in the other countries where I have lived.

This is why the Trump camp’s position on immigration is disingenuous, dangerous and completely opposed to what this country is about. And this is why, at the end of it all, I am thrilled that 2016 will be the year when I cast my first vote as an American.