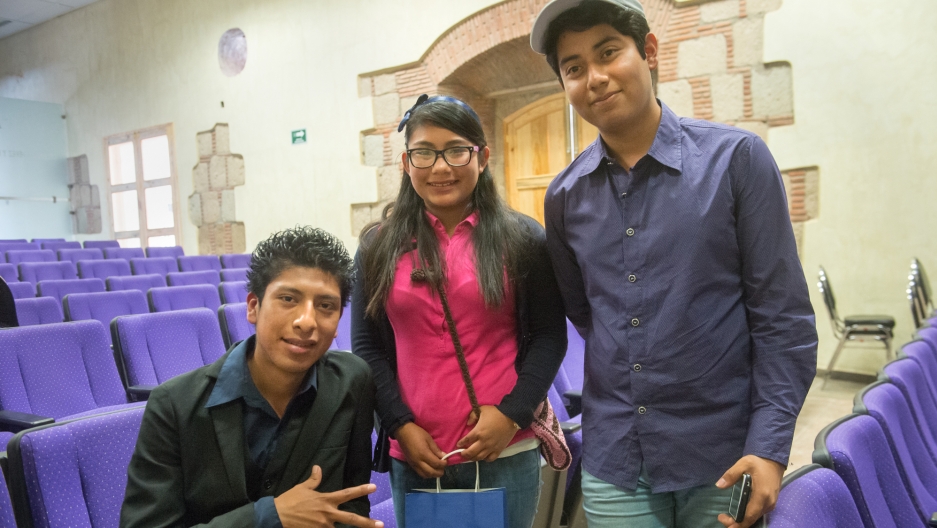 Teenagers Melchor Velsaco Lopez, Sharely Lopez and Brayan Martinez Sanchez (left to right) are in an auditorium in Tlacolula, Oaxaca, Mexico in Jan., 2016. This photo was taken just after the premiere of "Una Vida, Dos Paises," a documentary about US-born or US-raised children who return to Mexico with their undocumented parents.

Raising children is hard enough. But it’s much harder when you are undocumented and struggling to make a living. That’s why some families feel they have no choice but to pack up their bags — and often their US-born and US-raised children — and return to their home countries.

Sharely Lopez, who is 15, was brought from the US to Mexico by her parents. Her younger sister was born in the US, but the rest of her family was undocumented. Her father, Alberto Lopez, says he felt heartbroken because he was not able to see his parents (her grandparents) for over a decade. The Lopez family returned to Mexico to reunite with aging family members and because it became difficult to maintain employment without papers. 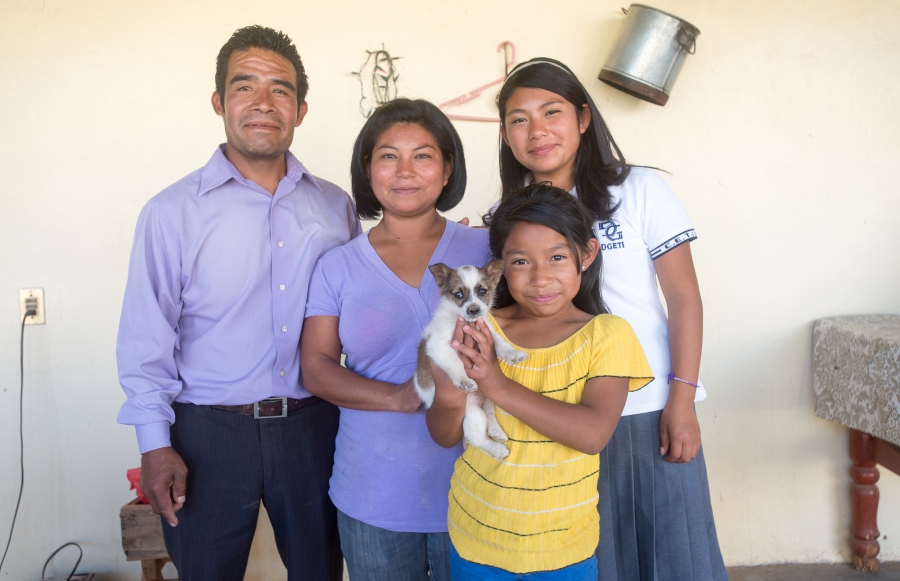 The Lopez family in Oaxaca, Mexico in 2015. Alberto Lopez (left) says that the family moved back to Mexico to reunite with aging relatives and for financial reasons. Sharely Lopez (right, back row) was raised most of her life in the US.

Had they not returned to Mexico, Alberto Lopez and his wife Tere might have been eligible for the Deferred Action for Parents of Americans and Lawful Permanent Residents (DAPA) program, which the Supreme Court is expected to rule on some time this month. The program, if allowed by the court, could give parents of US citizens or legal permanent resident children temporary relief from deportation and authorization to work. It would also give families a chance to travel internationally for work, school or humanitarian purposes via special permission from the government.

But DAPA requires parents to have lived in the US continuously since 2010 and, according to several lawyers and legal scholars, cannot be used by people who have already returned to their home countries.

Alberto and Tere Lopez aren’t alone in making the difficult decisions to return. One million Mexicans living in the US have returned between 2009 and 2014, according to the Mexican National Survey of Demographic Dynamics. The 2010 Mexican Census found half a million US-citizen children born to Mexican parents living in the country.

With federal immigration reform at a standstill, state policies and federal programs have been the only spaces of hope — or anguish — for undocumented immigrants and their children living in the US without papers. These are the stories of three children raised in the US who went back to Mexico because of struggles related to living without papers.

Sharely, Brayan Martinez Sanchez and Melchor Velsaco Lopez have started anew in the southern state of Oaxaca, Mexico, a place they barely remember. All three students have no memory of being brought to the US, but they do recall their experiences of returning to Mexico.

The three of them formed a club called the New Dreamers at Centro de Estudios Tecnológicos Industrial y de Servicios (CETis) #124 — one of the high schools in the town of Tlacolula. I worked with them as a kind of advisor to the club while I stayed in Oaxaca for my academic research. Here are their own words about what it was like to start over. 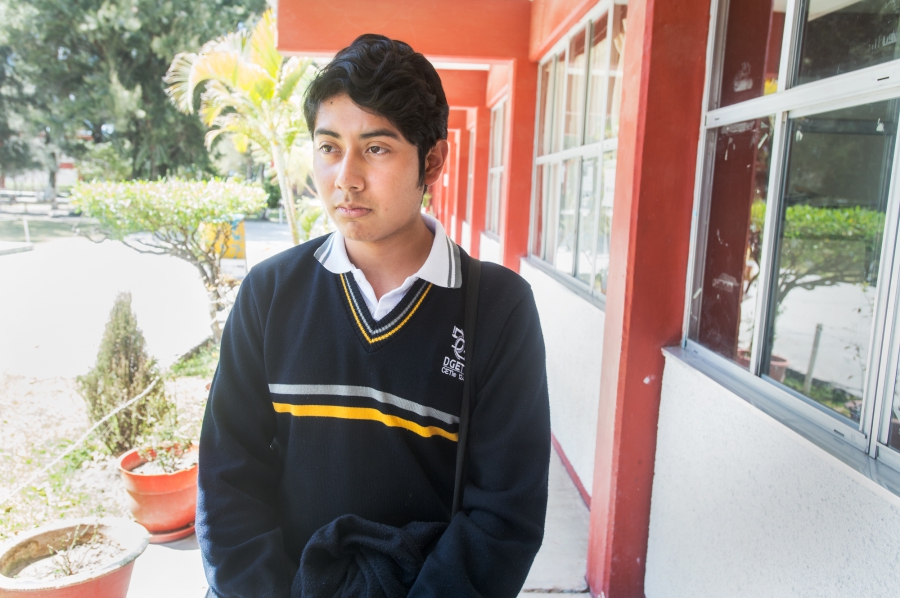 Brayan, 15, was brought to Los Angeles when he was three. His family moved to Florida before he started kindergarten and then returned to Mexico after nine years of living in the US.

I went to Orangewood Elementary School, which was hard for me because I had to learn English. It took me about a year to learn it well. When I was in second grade I knew how to speak the language like a person who was born [in the US]. It was easier for me to write essays, do my class work and homework. I remember each of my elementary school teacher’s names: Mr. Gold, Mrs. Katrina, Mr. Brooks, Mrs. Heather, Mrs. Sparrow and Mr. Christopher. I liked my life there because it was so perfect, it was a beautiful place.

When my mom told me that we were going back to Mexico I was very sad and started crying. I didn’t want to come back because I grew up there and I felt so bad because it was not my decision. It was theirs and I couldn’t do anything about it.

When we returned, I remember that I felt so strange because I didn't know the people we were staying with in my grandma’s house. All my aunts, uncles and cousins came to see us for the first time. I wondered, “Who are they?” They kept telling me that I look so strange because my hair was long and I was fat and I didn't know how to speak Spanish because all my life I was talking English. Always in English.

Now that I’ve been back in Mexico for a few years I am happier because I know that I can make it in both places because I am smart and bilingual. I was born in Oaxaca but I grew up in America. So I don’t even know if I’m from here or there, but I hope to return someday. 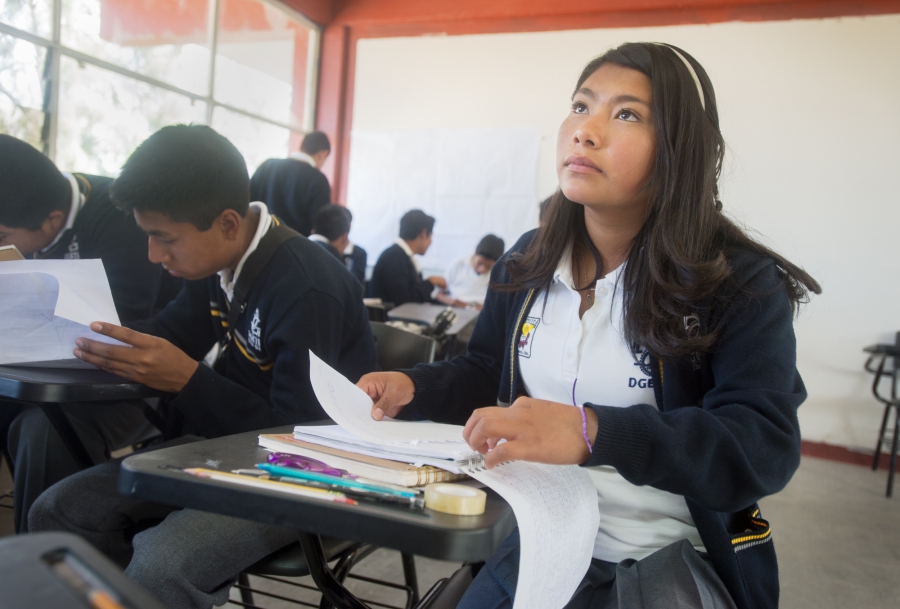 Sharely, 15, was brought to the US by a coyote, a person paid to smuggle people across borders, when she was 1. For 12 years, she lived in different parts of Southern California with her parents and US-born younger sister. Her family moved from apartment to apartment — which were sometimes garages — before returning to their indigenous village in Oaxaca.

I went to two different kindergartens and five different elementary schools. I always wished I could have been in the same school and apartment for more time, but we had to move around often because of my dad’s work situation and the price of rent.

Now I am a high school student in Tlacolula, where I have met new friends and family. I have also reunited with my grandparents, which is very important to me. Life here is really tough. That’s why I want to study to become an English teacher or a tour guide in Mexico. I want to have a good job so I can help my parents so they won’t have to struggle in their town. I am glad I came back because I like teaching people English, but I also miss Los Angeles where I lived for 12 years, the majority of my life. 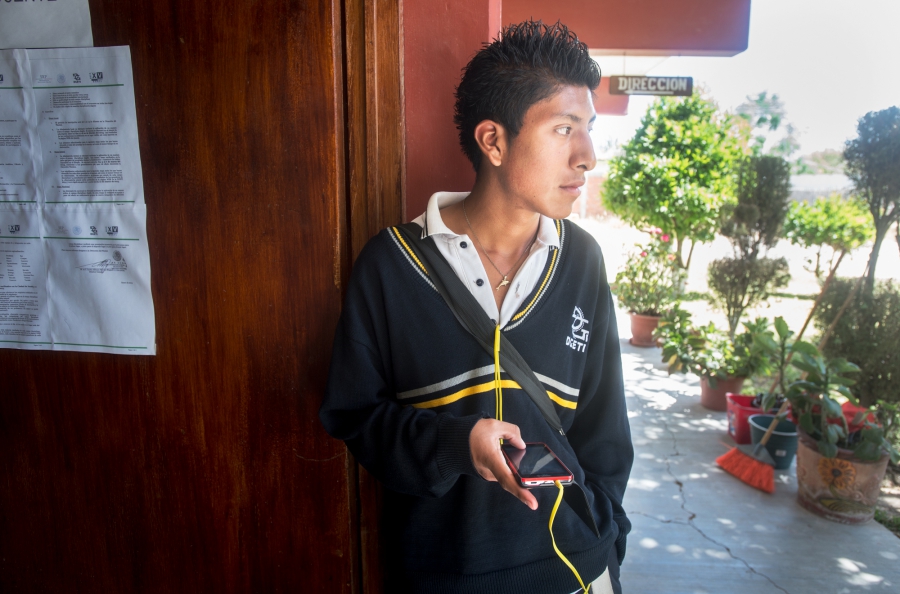 Melchor Velsaco Lopez at his school in Tlacolula, Oaxaca, Mexico. He has graduated from this school since this picture was taken.

Melchor, 17, was brought to the US with his brother as a toddler. They lived in Idyllwild, California, where their father scaled trees to support the family. After injuring his back, the family could no longer support themselves and returned to Oaxaca after 11 years away.

I asked, “What are we doing here if this is not our country?” And my dad said, “We are here for money and also to give you an education and that some day — we don´t know when — we’re going back, only God knows when.”

Then from that day I realized that we were different. It felt like there was an invisible wall around us and we could not do the same things as other people.

One day I was walking with my dad and some people said, “F-----g Mexicans, go back to where you came from, this is not your land!” I saw the truth.

We drove for four days through California, New Mexico and Arizona to get to the El Paso, Texas border. There I spent my last moments in the US. I turned around and said, “I will be back, I don’t know when, but it’s a promise.” I took my last breath on that side of the border and turned around, leaving not just friends and family, but a life I will never forget. I crossed knowing that if I return, it will be with papers. I would not be an illegal immigrant again.

I told my brother that this is where we were born, but it doesn’t feel like home. It felt like we were the strangers, but we got used to it little by little after three or four years; I actually lost the count once I felt more confident in Mexico. Sometimes I feel like my place is there, but I still tell my parents that we are better off here than in the US. Now I am in my last year of high school and the next step is college. I hope someday I can return home [to the US], but I made a promise that first I will complete my studies here in my home state of Oaxaca. I’ll call it my old and new dream.

Since writing his story, Melchor has graduated from high school and was accepted to a private college in Mexico to study tourism. However, the tuition was too steep for his family to afford so he has forgone college for the moment. He is picking up work wherever possible making below minimum wage in Mexico.

Melchor, Brayan and Sharely were featured in a 2016 documentary produced by the author, William Perez and Rafael Vásquez called “Una Vida, Dos Países: Children and Youth (Back) in Mexico.” The film is available online in its entirety. Here’s the trailer: