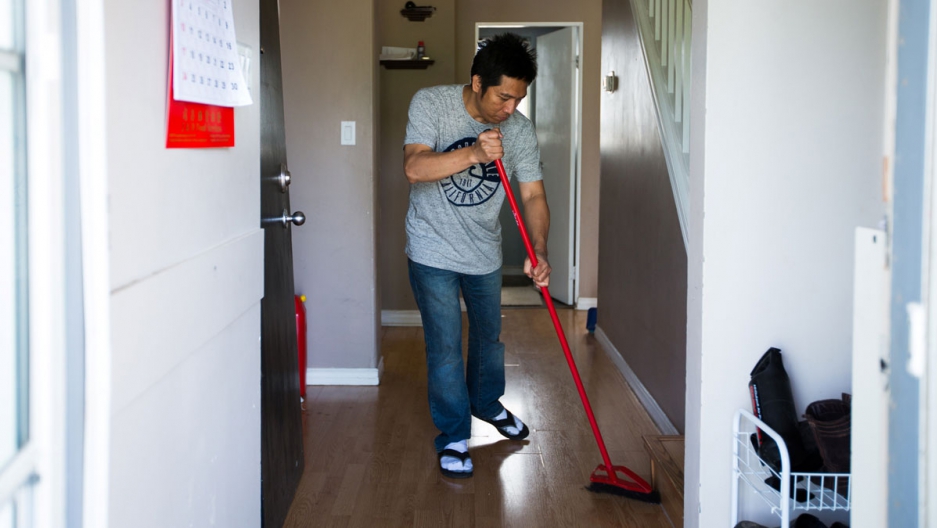 A man sweeps the floor of his house in Alberta, Canada.

Sunday is my first Father's Day. Celebration aside, I have decided to make a Father's Day resolution — share a greater proportion of housework and childcare activities.

Before our son was born this January, the distribution of housework between my wife and I was almost balanced with her contributing slightly more. The scales were tipped heavily since the first day of his arrival.

To me, this is both unhealthy and unacceptable. The unbalanced work distribution between genders has long been a major contributor to gender inequality. This gap is wider in unpaid household work which is often overlooked by policy makers due to the perception that such work remains in private space and it is hard to be measured.

According to the 2015 Human Development Report by the United Nations Development Program, three out of every four hours of unpaid work are done by women while men get to do two of every three hours of paid work.

Even in families where both partners are employed fulltime, women still spend more time in unpaid work.

My wife and I are not alone, as the report identifies the same issues in couples with newborn children.

"The greatest change in the time individuals devote to domestic work is when children are born. It is also typically a point at which traditional gender divisions of work in the home assert themselves, even if there was more equality up to then."

In terms of unpaid work, there's an increase of almost 40 percent for fathers. For mothers, the amount of time jumps more than 60 percent.

“Unpaid care work is at the foundation of all our societies, and crucial for economic growth and social development. However, it has been mostly overlooked or taken for granted by policy makers. This has an enormous impact on women’s poverty and their enjoyment of rights — as they do the majority of unpaid care,” Magdalena Sepúlveda told the UN General Assembly in 2013.

On the other hand, paid work has a great impact on gender equality as it provides economic autonomy, social participation and interaction and boost self-esteem and confidence of the workers, according to the 2015 Human Development Report.

"Unpaid caregivers seldom get to exercise choice in fulfilling their responsibilities and are often motivated by cultural, family and societal constraints. When people undertake care responsibilities and stay out of the labour force, they make large sacrifices, perhaps missing the chance to expand their capabilities in the workplace. They also often compromise their economic independence and personal autonomy, which can be crucial for them and their children."

Another report published by the OECD in 2014 established the relationship between unpaid domestic work and women's labor force participation. It found that in countries where women spend an average of five hours on unpaid care activities, only 50 percent of women in the working-age population are employed or looking for a job. The percentage increases to 60 percent in countries where women spend three hours on unpaid care work. In short, the less time women spend on unpaid housework, the greater chance they have a paid job.

Although the gap has been narrowing in the last 50 years, the pace has been slow.

Top-down policies are only part of the solution. The change should likely start at home with every couple — especially the partner who does the less housework.

As the first step, let's find out how much time you spend in housework and caring for children using the calculator below. Happy Father's Day. You can also try our Mother's Day calculator.