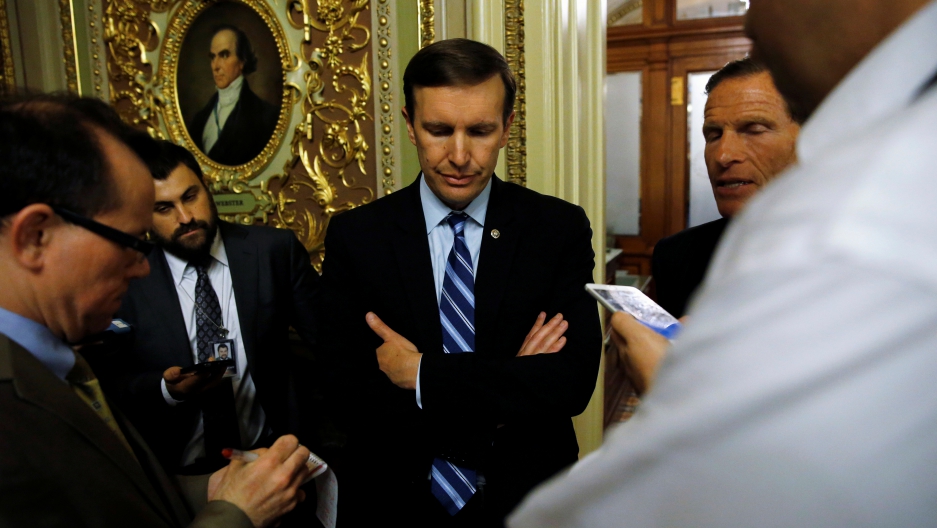 US Senator Chris Murphy, center, and Senator Richard Blumenthal, right, speak to reporters after ending a 14-hour filibuster in the hopes of pressuring the U.S. Senate to action on gun control measures, in Washington, June 16, 2016.

President Barack Obama went to Orlando Thursday to comfort victims of Sunday's shooting — and to show solidarity with the community. Meanwhile, lawmakers on Capitol Hill found their own way to respond to Sunday's shooting.

Led by Connecticut Senator Chris Murphy, Democrats launched a nearly 15-hour filibuster on the Senate floor on Wednesday in an effort to pressure Republicans to accept legislation that would prevent suspected terrorists from purchasing guns.

"It doesn't take courage to stand here on the floor of the United States Senate for two hours or six hours or 14 hours,” Murphy said during the filibuster. “It takes courage to look into the eye of a shooter and, instead of running, wrapping your arms around a 6-year-old boy and accepting death … If [Sandy Hook teacher] Anne Marie Murphy could do that, then ask yourself ‘What can you do to make sure that Orlando or Sandy Hook never, ever happens again?’”

It appears that his impassioned plea has worked, at least according to this tweet from Murphy:

I am proud to announce that after 14+ hours on the floor, we will have a vote on closing the terror gap & universal background checks

But has the Connecticut senator really shifted anything?

Since Sunday’s shooting in Orlando, lawmakers have been working behind the scenes to try to open up negotiations on the issue of gun control, Zwillich says, adding that the senator’s filibuster was used more as a tool to increase the pressure on GOP lawmakers.

“Orlando has been about a lot of things in the aftermath, and we all know that — it’s about terrorism, it’s about homophobia, and it’s also about the gun issue,” Zwillich says. “It’s also an election year, and Chris Murphy and his colleagues are endeavoring to bring even more attention to an issue that they’ve been pounding on for the last two years.”

In the House, perhaps unsurprisingly, Connecticut Rep. Jim Himes has come out in support of Murphy. But he’s taking things a step further, arguing that America needs to fundamentally change its perspective on the issue of guns.

"I think we need to influence the debate outside this building,” Rep. Himes says. “Moms need to start refusing to send their kids on playdates in homes where there are unsecured guns. Women need to refuse to date men who keep guns in their cars. We need to change the way we think about guns, [and stop thinking] that it's somehow an empowering thing — that it makes me a better person and a safer person."

So what will lawmakers actually do next? Zwillich says the Senate plans to vote on an amendment that would keep people on terror watch lists and the no fly list from purchasing guns.

“[Individuals] would be able to appeal, through the Justice Department, their placement on that list if they were denied their Second Amendment right to buy a gun, but it would allow the attorney general to block certain people from buying guns,” he says. “The other [initiative] is basically a re-vote of an old issue: Expanding universal background checks to gun shows and to internet sales. Those are two big things the Senate is going to vote on.”

Though previous attempts to institute these measures have failed, Zwillich says that these amendments may actually pass the House and Senate.

“This is an election year, and like anything else, there might be some frustration if these things don’t pass,” he says. “Many Republicans might want to vote on a different side of this issue.”

GOP Senator Pat Toomey has sponsored legislation for universal background checks in the past. Zwillich says he’s now stepping forward to try to negotiate a deal between Democrats and Republicans.

"What we need is a process that would block terrorists from being able to purchase a firearm, and at the same time, make sure there's a mechanism whereby someone who was wrongly put on the list has a chance to clear their name and gets their Second Amendment rights," Toomey says.

Additionally, Zwillich says GOP Senator John Cornyn is sponsoring an amendment that would allow authorities to arrest individuals on a terror watch list if they even attempted to purchase a gun.

“That’s not legal right now — that doesn’t constitute probable cause — but Cornyn wants to make it possible if someone like [Orlando shooter] Omar Mateen were to go in and try to buy a gun, having been on a watch list, the gun dealer could call in or do the background check, and that would signal the FBI or local police authorities to come and roll that person up,” Zwillich says. “That would be probable cause to do it, and it speaks directly to that issue.”

But will the NRA get on board? Zwillich says the pro-gun group supports Senator Cornyn’s proposal — for now at least.