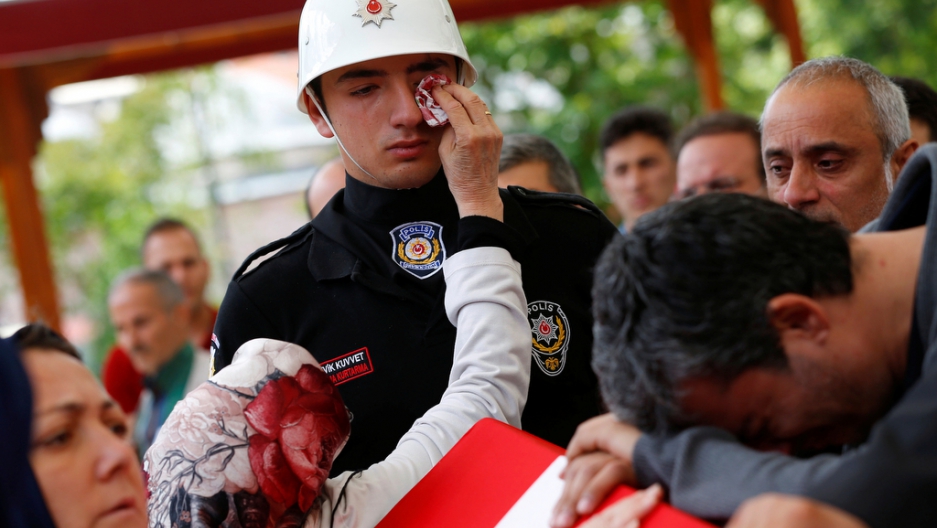 A woman wipes the tears of an honor guard as he stands next to the coffin of police officer Kadir Cihan Karagozlu who was killed in Tuesday's car bomb attack on a police bus, at Fatih mosque in Istanbul, Turkey, on June 8, 2016.
Credit: Murad Sezer
Share

Outlawed Kurdish rebels on Thursday claimed a suicide car bombing at a police station in southeastern Turkey that killed six people including a pregnant policewoman.

The claim by the Kurdistan Workers' Party (PKK) was issued after a bloody two days that shattered the start of the holy Muslim fasting month of Ramadan in Turkey.

In all, at least 17 people were killed in bombings blamed on Kurdish militants in the southeast and mega-city Istanbul, the latest in a wave of deadly attacks in Turkey over the past year.

"A major suicide attack was carried out on the police headquarters of the fascist state forces in Midyat town ... by our comrade," the PKK said in a statement.

It said the six-storey police station was a place where "all kinds of dirty plans ... and pressure" were applied against "our people and our values".

The number of dead from Wednesday's attack rose to six after a third police officer died, Turkish media reported. The other two officers were both women, one of them pregnant.

Turkish authorities had already pointed the finger at the PKK, which has been waging a decades-long insurgency against the state and is listed as a terror group by Ankara and much of the international community.

The suicide bomber, identified by his guerrilla name "Dirok Amed", fought in the ranks of the PKK and was from the Kurdish-majority southeastern province of Diyarbakir, according to the group's statement.

On Tuesday, a car bombing against a police bus in the heart of Istanbul claimed 11 lives, including six officers. There has so far been no claim for that attack.

In an move to crack down on the use of potential bomb-making material, Agriculture Minister Faruk Celik said the sale of fertilizers containing nitrate was being suspended in Turkey.

Some 64,000 tonnes of the products had already been seized from retailers, Turkish media quoted him as saying.

Prime Minister Binali Yildirim said the PKK had made a bid for dialogue after almost a year of renewed violence that ended a two-and-a-half year truce.

"These days news comes, directly or indirectly, from the terrorist organization saying 'we can negotiate, we can lay down arms, we should talk'," Yildirim said.

"There's nothing to discuss," he said late Wednesday, quoted by the Dogan news agency.

Over 40,000 people have been killed since the PKK took up arms in 1984 demanding an independent state for Kurds. Since then the group has narrowed its demands to greater autonomy and cultural rights.

"The attacks that occurred in the month of Ramadan show the vile terrorist organization does not recognize any sacred value," Yildirim said.

President Recep Tayyip Erdogan has vowed that the fight against the PKK will continue "until doomsday".

In angry front pages, Turkish newspapers focused on the fact that two of the police officers killed in Midyat were women.

Serife Ozden Kalmis, 31, was six months pregnant and had worked in the security detail of ex-president Abdullah Gul, who in a message on Twitter praised her "devoted service" and expressed "immense sadness".

Another victim, Nefize Ozsoy, was a mother of a four-month-old daughter.

Hundreds attended funeral ceremonies for the victims in Midyat, with their coffins borne aloft through the crowds along with Turkish flags.

In Istanbul meanwhile, Turkish police fired rubber bullets to disperse hundreds of demonstrators who gathered to protest against threats made to the head of the main opposition party, an AFP photographer reported.

Kemal Kilicdaroglu, who heads the secular Republican People's Party (CHP), had a live bullet thrown at him on Wednesday when he attended funerals for the victims of the Istanbul attack.