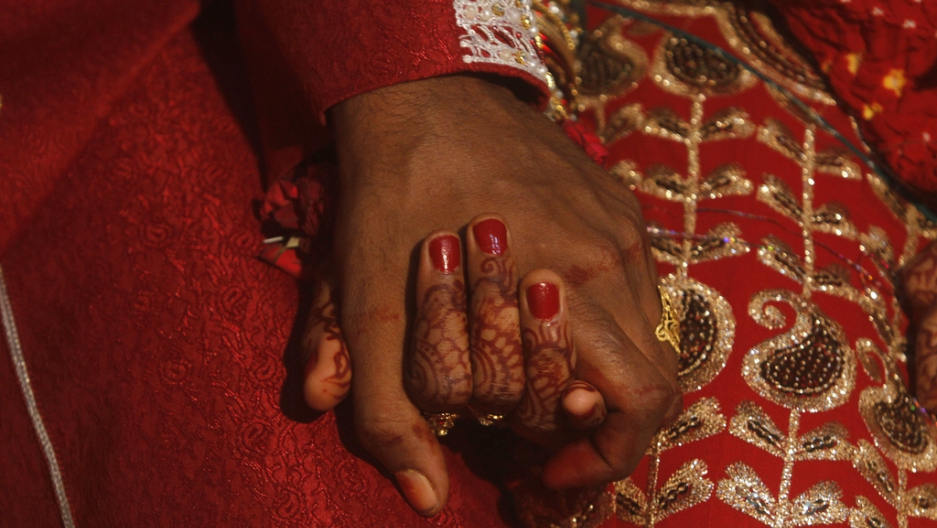 A bride and groom hold hands as they sit together during a mass marriage ceremony held in Karachi on Nov. 30, 2013.
Credit: Athar Hussain
Share

A Pakistani mother on Wednesday burnt her 16-year-old daughter alive for marrying a man of her own choice, before shouting on the street to neighbors that she had killed the teen for bringing shame on her family.

It was the third so-called "honor killing" in the South Asian country in as many months, and a rare example of the crime being carried out by a woman.

Zeenat Bibi, 16, was set on fire by her mother Perveen Bibi in the eastern city of Lahore a little more than a week after the couple had acquired their marriage licence, police said.

"Perveen Bibi killed her daughter Zeenat Bibi by burning her alive around 9:00 am on Wednesday," Haidar Ashraf, a senior police official told AFP, adding the teen had married a man named Hasan Khan on May 29.

Khan's ethnicity — he is an ethnic Pashtun, while Zeenat was a Punjabi — was the main cause of the family's disapproval, according to the woman's family.

Zeenat's husband Khan told local TV station Geo News that the pair had eloped, but he had reluctantly allowed her to return to her family home after they promised they would hold a celebration and not harm her.

He said: "After living with me for four days following our marriage, her family contacted us and promised they would throw us a proper wedding party after eight days. Then we would be able live together.

"Zeenat was unwilling to go back to her home and told me that she would be killed by her family, but later agreed when one of her uncles guaranteed her safety.

"After two days, she called me and said that her family had gone back on their word and asked me to come to get her, but I told her to wait for the promised eight days. Then, she was killed."

Ashraf, the police official, said Perveen and other family members had confessed to the crime and that police had seized kerosene oil from the scene.

At the victim's two-bedroom family home in a low-income southern neighborhood of the city, Perveen's family remained defiant.

Naseem Bibi, Perveen's younger sister, told AFP: "After killing her daughter, Perveen went out on the street, took off her shawl and started beating herself on her chest, shouting: 'People! I have killed my daughter for misbehaving and giving our family a bad name.'"

"My sister declared a long time ago she would not allow her daughter to marry a Pashtun," she said.

The victim's sister Shazia also blamed Zeenat for defying her mother, but said she had urged her mother to cut ties with her instead of killing her.

Perveen's husband died several years ago and her relationship with her daughters had deteriorated, according to Shazia.

"Our mother became distressed because of her daughter's disobedience and because she felt there was no man in the house to rein her in."

Hundreds of women are murdered by their relatives in Pakistan each year on the pretext of defending what is seen as family honor.

"A Girl in the River: The Price of Forgiveness" — a film telling the story of a rare survivor of an attempted honor killing — won an Oscar for best documentary short in February.

Amid publicity for the film, Prime Minister Nawaz Sharif vowed to eradicate the "evil" of honor killings but no fresh legislation has been tabled since then.