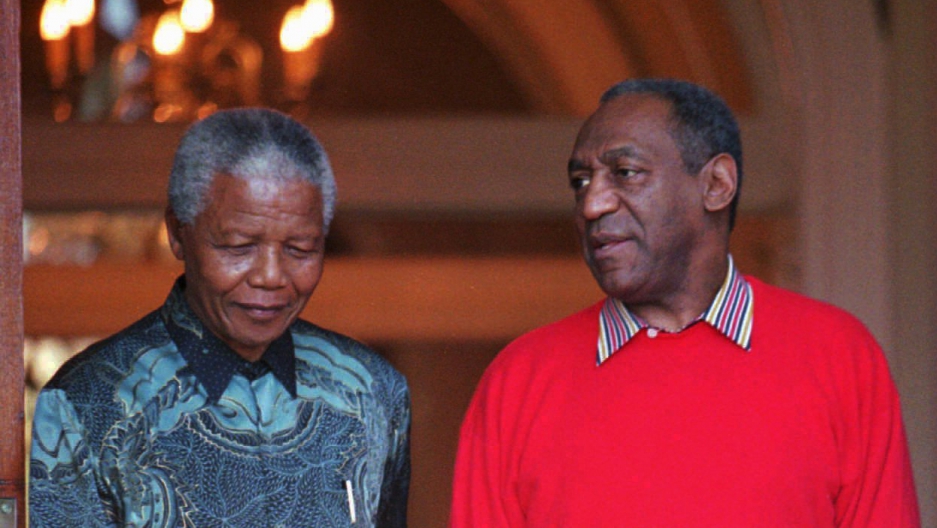 Bill Cosby and Nelson Mandela, then President of South Africa, appear before the press on March 20, 1997 in Cape Town. During his visit, Cosby gave a benefit performance on Robben Island for then visiting first lady Hillary Rodham Clinton, Mandela and United Nations Secretary General Kofi Annan.

Bill Cosby's fall from grace has been steep. For decades he was not only an American icon but a global one.

"It was 1985 when the show first aired and I must have been around I think 15, and everybody was watching it," says Sean Jacobs, who is black and grew up in Cape Town. He now teaches at The New School in New York.

Jacobs remembers well the turbulence of that time. The anti-apartheid movement was growing in power. South African President PW Botha had imposed a state of emergency.

"I was in high school. The black population in general were highly politicized. There was also a campaign [internationally] to have sanctions against South Africa and that campaign was beginning to focus on entertainment. So it was ironic that a show by somebody who was very explicitly an opponent of apartheid was shown in South Africa."

These days there is another grim irony in the dozens of accusations of sexual assault that have been leveled at Cosby, who in his fictional role on the show embodied fatherhood and family values. The charges themselves hit close to home in South Africa, a country with very high rates of sexual violence against women. An estimated 500,000 cases of rape occur every year. Even the country's president, Jacob Zuma, was charged with rape in 2005, before he was president. He was found not guilty.

"I think like everybody we are generally shocked," Jacobs says of the charges against Cosby. "But I think people try to make a distinction between what is a character and what was a show in a particular moment in the 1980s."

For Jacobs in the '80s, "The Cosby Show" offered a strange contrast to the political chaos around him. "It was just interesting on the one hand to see a black family who's middle class. The father's a doctor. The mother is a lawyer. Now and then the outside world would disrupt this idyllic setting but in general it's sort of like father and son, mother and daughter, mother and son, and the neighbors. And living in South Africa at the time, there's tear gas, there's tension. When you watched ['The Cosby Show'] it was something that was just out of sync with the world you were living in."

"The Cosby Show" also put a black man and his family front and center. In South Africa at the time, there was a black leader on everyone's mind, but even his image was banned. "[Nelson] Mandela was larger than life as an absence rather than a presence," says Ron Krabill, who wrote a book about the impact of media in South Africa in the 1980s. Mandela, a key figure in the resistance movement against apartheid, was imprisoned from 1964 to 1990.

"There's a lot of folks, especially white South Africans, who would say ['The Cosby Show's'] impact on their attitudes towards black South Africans and their willingness to go towards the negotiation [to end apartheid] was hugely profound, that it was one of the most significant things that happened. I tend to think those are overstated. I think the significance of the show lies more in its shared popularity, its shared cultural phenomenon, [the idea] that perhaps there was some sort of future beyond apartheid."

Krabill hastens to mention that there is a way in which "The Cosby Show" reinforced apartheid, too. "The ways in which African American culture, art, music is highlighted in 'The Cosby Show' in an American context is very very clear. In the South African context that can read very much as 'separate but equal.' The Huxtable children go to historically black colleges. Occasionally a white family will enter the home but it's relatively rare, and that centering of black American life actually reads not inconsistent with apartheid in the South African context."

Remarkably, South Africa didn't even have television until 1976. Krabill says that's because "the apartheid regime was afraid of the impact television would have as a medium, not necessarily content-specific." Only when satellite technology became available did the government decide to get in the game to control the medium to whatever degree they could.

The apartheid-run South African Broadcasting Corporation chose "The Cosby Show" because "it was seen as entertainment, as innocuous, as not dangerous." 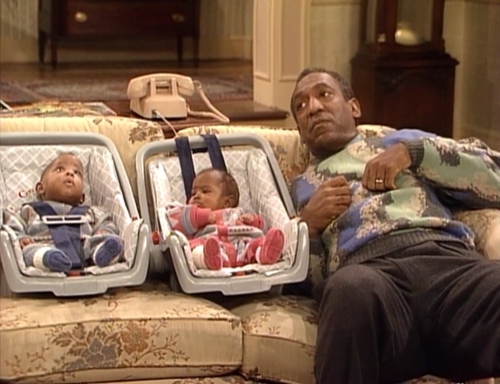 However, Bill Cosby was a public opponent of apartheid, and over the years anti-apartheid messages appeared in the series. In one episode, Theo Huxtable's bedroom door opens to reveal a poster of Mandela. In another South African singer Miriam Makeba, then decades into a forced exile, stars in a guest role. The twin grandchildren of Cliff Huxtable are named Nelson and Winnie (Winnie was Mandela's wife until 1996).

Sean Jacobs sees a connection there, too. "One of the distinctive features of post-apartheid South Africa is a class apartheid and it is one in which you have the retention of white privilege. A section of the black population have joined that middle class, the gated communities and all the privileges, the old schools inherited from apartheid. They send their children there. A class apartheid is I think what is represented by 'The Cosby Show.'"