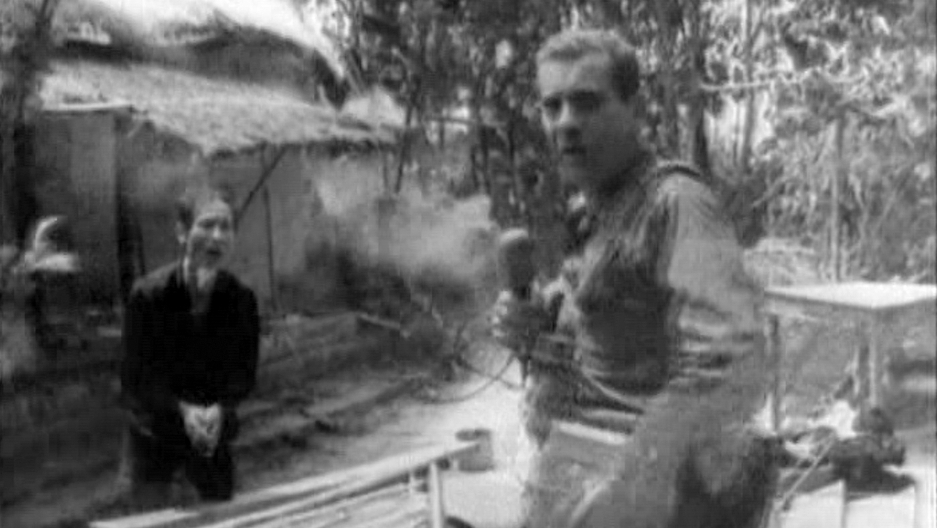 Morley Safer, correspondent for CBS News, reporting on the systematic burning of South Vietnamese villages by US Marines in Cam Ne, Vietnam, 1965.

Americans sat in front of their TV sets stunned.

It was 1965 and the Vietnam War dominated the evening news. A report from correspondent Morley Safer showed US Marines in the dirt-poor village of Cam Ne.

A soldier Safer was talking to casually touched his Zippo lighter to the roof of a thatched hut. Desperate villagers cried and pleaded with the Marines to stop as Cam Ne went up in flames. Few primetime viewers had ever seen US troops act with such brazen cruelty.

"The day's operation burned down 150 houses, wounded three women, killed one baby, wounded one Marine, and netted these four prisoners — four old men who could not answer questions put to them in English, four old men who had no idea what an ID card was," Safer, then 33, told his evening news audience.

The coverage "hit like an explosion," according to Peter Herford, who was then Saigon bureau chief for CBS.

"A lot of people made the assumption, I did too at one point, that we were there [in Vietnam] to do good, we were there to do the right thing," says Herford, who later worked with Safer at the CBS program 60 Minutes. "Here were images of American soldiers doing some very very bad things."

Related: Check out a conversation with Herfod about his career in journalism.

Safer died Thursday at the age of 84. Many considered him to be one of the best journalists working in Vietnam during the war.

That day in Cam Ne, Safer wasn't the lone reporter in the field. Beside him was his longtime cameraman Ha Thuc Can, a Vietnamese national.

"The relationship between a correspondent and his crew is a marriage. And in this case the marriage between Ha Thuc Can and Morley was probably better than 99 percent of the good marriages that any one of us can think of," Herford says. "Ha Thuc Can and Morley after a while never had to talk to each other. ... They simply knew each other's moves so intimately, that it was a fantastic team operation."

One of Herford's lasting memories of Safer is of a Sunday when the bureau chief had sent the young reporter out to cover what the television network called "bang bang" — active combat.

"He started to walk out of the office and suddenly turned around, took a step back toward me, looked at me and said, 'I'm scared,' and turned around and left," Herford recalls. "I had never heard that out of any other correspondent, and he was the only one I could think of who had the humanity to let down the barrier and admit something that all of them lived with."