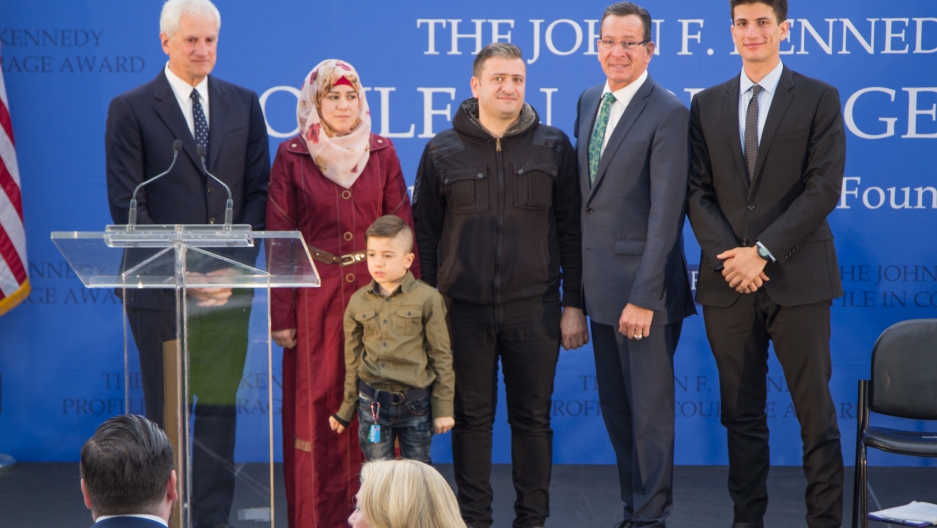 This Syrian couple and their five-year-old son lauded Connecticut Gov. Dannel Malloy (second from right) for personally welcoming them to the US last November. The family is withholding their last name due to concerns about the safety of relatives back in Syria.

The Syrian couple and their 5-year-old son waited three years to learn if they'd be allowed to come to the US.

Finally, last November, they received authorization to settle in Indianapolis.

Then ISIS militants turned their weapons on Parisians, leaving 130 dead.

"I just said, 'That's ridiculous,'" Malloy recalls. "We will in Connecticut continue to do our part to resettle refugees. It then just so happened that this family was on its way to Indianapolis ... and they got diverted to Connecticut, and I went to meet them. Wonderful people."

The Syrian family, including the mother, Fatema, was on hand earlier this month to praise Gov. Malloy when he received the Profile in Courage Award at the John F. Kennedy Presidential Library. Malloy was lauded for his advocacy on behalf of refugees.

"Suddenly in the middle of darkness, there was a light, a person who was generous in spirit and who was good, who accepted us," Fatema said at the event. The family's surname is being withheld out of concern for the safety of relatives back in Syria.

Malloy's efforts on behalf of the family are part of a broader US effort to aid Syrians displaced by the six-year-old conflict. Since last summer, Connecticut has welcomed an estimated 75 Syrian refugees, according to local authorities. Some 250 more are on the way.

But Malloy admits US authorities seem to be having a tough time meeting their stated goal of admitting 10,000 Syrian refugees before the end of October.

"Our friends in Canada are doing a substantially better job than we're doing," he says. "In Connecticut, people are stepping forward and saying, 'Hey, we'll be part of the solution.'"

As for concerns voiced by other US governors that extremists could use the refugee process to enter the US, Malloy isn't worried.

"Yeah, sure, there were probably a lot of people who don't think I'm right about this, but I don't think that they have the vantage point of understanding what the process is," he says, "how exhaustive it is — that it takes up to two years for a refugee to be cleared for placement in the United States. There are multiple biometric devices that are used, background programs, a number of interviews where people are tested for discrepancies in their stories, where husbands and wives and children will be interviewed separately. A lot of people don't understand how good the process is."