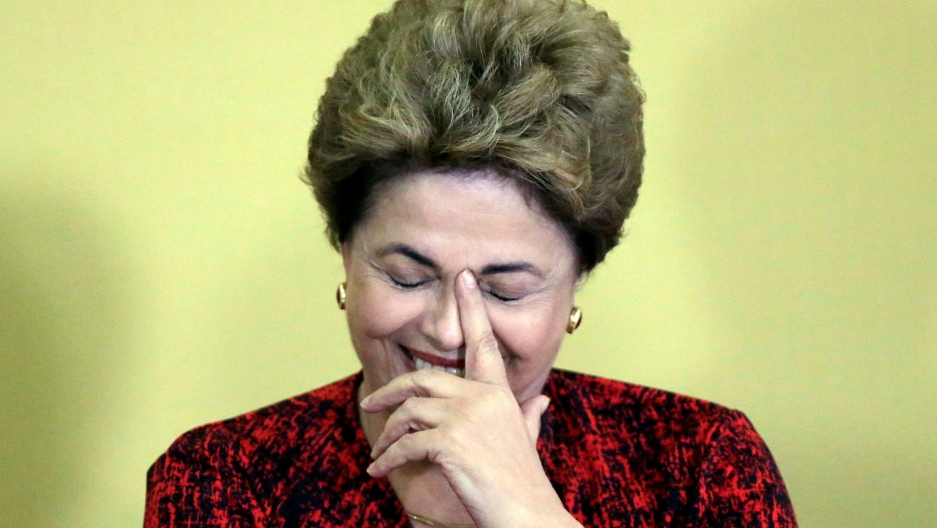 But even by Brazilian standards, the antics of the last 24 hours have been very strange.

One minute, President Dilma Rousseff was on her way to likely impeachment. The next minute, it seemed like maybe she wasn’t. Then, no, the process is continuing again.

You’re forgiven for being completely confused. So is just about everybody else. Here's what we know:

President Rousseff is probably on the cusp of losing her job. Congress is deciding whether to try her for impeachment. The lower house already voted to do so. The Senate is due to discuss it on Wednesday.

If — as widely expected — the Senate moves ahead with impeachment proceedings, Rousseff will have to step down temporarily while she is investigated.

She is accused of basically playing a shell game with public money — allegedly moving funds from one spot to fill holes in another without congressional approval — which, her critics say, would have made government finances look better in the run-up to her re-election in 2014.

All of a sudden on Monday morning, Waldir Maranhão, the interim lower house speaker, announced he was “annulling” last month’s vote for Rousseff’s impeachment. He claimed the vote denied the president "the right to a full defense."

The context for this is Maranhão has held his powerful post for less than a week. He inherited the position from Eduardo Cunha, who on May 5 was suspended so that he could face trial on accusations of corruption. Cunha is considered the architect behind Rousseff's impeachment.

Maranhão’s radical power play looked like a lifeline for Rousseff, and Brazilian newspapers were quick to run photos of her apparently grinning at the news. But the president warned her supporters not to get too excited.

Political scientists, meanwhile, scratched their heads: Was the impeachment happening? Or not?

The answer was not forthcoming.

Many Brazilians went to bed confused.

And they woke up even more confused.

In the early hours of Tuesday, speaker Maranhão unexpectedly announced he was retracting his attempt to annul the congressional impeachment vote.

Brazil was essentially back where it had started less than 24 hours earlier.

3. So where does all this leave us?

As of Tuesday morning, the Senate's impeachment vote was scheduled to happen as planned on Wednesday afternoon.

The discussion is likely to be very long, but we should know by Wednesday night whether Rousseff is still serving as president of Latin America’s largest country.

One of a few things is most likely to happen:

a) The Senate votes to investigate Rousseff, which means she has to step down for up to 180 days. She is temporarily replaced by Vice President Michel Temer, who belongs to a more centrist party than Rousseff’s left-leaning Workers Party.

b) The Senate votes not to investigate Rousseff — which is highly unlikely, analysts say.

c) Some other wacky X-factor thing happens, again, that puts the process on hold or cancels it. Your guess is as good as ours what the factor could be. (Remember, Brazilian politics is weird.)

5. I’m not Brazilian. Why should I care?

Good question. Here are some reasons to be interested:

Brazil is Latin America’s largest economy, and it’s a decent-sized trading partner with the United States. Brazil’s economy is in a big mess right now, and some analysts and investors think a change in leadership to a more market-friendly administration would be good for the country. Rousseff's supporters, however, fear cutbacks to major social programs that her party put in place.

Brazil’s economy also affects the rest of South America. Simply put: A strong, functioning Brazilian economy is good for the region, and good for the world.

Beyond economics, overall stability is also important. Analysts say Brazil poses a leading global risk in 2016. But they also keep coming back to one thing: The country's fundamental democratic institutions are still basically “functioning.”

There are protests on the streets, sure. But there’s no major sign (yet) that the country is spiraling out of control. Things looked pretty crazy over the last 24 hours, but the political process seems to be back on course, which should help to keep the country stable.

That might matter for the Rio Summer Olympics, which face myriad problems.

But it’s also important for geopolitical stability. Nobody wants the world’s fifth most populous country falling into chaos.