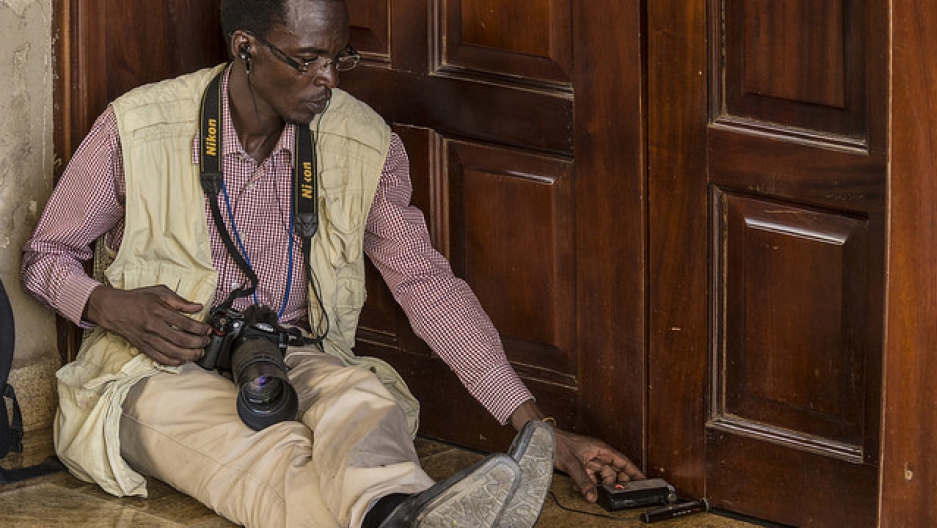 A South Sudanese journalist gathering news through the door at the State House during the swearing in of First Vice President Riek Machar on April 26, 2015. Only a few journalists were allowed to enter the hall.

With recent allegations of arbitrary arrests and increasing reports of the suppression of media, the South Sudanese government faces new challenges to their political authority and legitimacy.

South Sudan has become one of the world’s most dangerous countries for journalists. Seven journalists were killed in 2015 alone and five newspapers have been forced to close over the last year. In three days in August alone, three media outlets were shut down.

The government’s relationship with the local media has further deteriorated after it was reported in March that journalist Joseph Afandy was abducted, tortured, burned and left for dead. Just prior to his abduction, Afandy had been detained for two months without charge by the authorities for criticising the ruling party.

In the latest World Press Freedom Index, South Sudan dropped 15 places and is now ranked 140 out of 180, compared its ranking of 125 in 2015. The steady decline in the respect for media freedom in the country is disturbing, and the situation has worsened as a result of the civil war.

That conflict, which has devastated the world's youngest nation, began in December 2013, when President Salva Kiir fired Riek Machar — who was then his deputy and had served as the country's first vice-president since its independence in 2011 — accusing him of planning a coup. After fleeing the capital, Juba, in 2013, Machar returned this month and was sworn in as Kiir's first vice-president in what some hoped was a sign of reconciliation.

International rights organisations such as Amnesty International and Reporters Without Borders have condemned the wave of violence leveled against journalists, requesting an end to the crackdown on media and demanding the release of individuals detained without just cause.

During a recent human rights workshop, one local journalist, Alfred Taban, blamed the Sudan People's Liberation Army for failing to protect the rights of its citizens to exercise their freedom of speech and expression.

The dire situation has evoked a wave of concern over South Sudan’s future and whether the government will be held accountable:

President Kiir has previously threatened reporters on writing negative articles against South Sudan, with the Minister of Information and Broadcasting, Michael Makuei, reportedly intimidating media outlets for criticizing the creation of 28 regional states over the previous 10.

Journalist Peter Julius Moi was killed days after President Kiir said that journalists who reported against the country would be targeted.

Though government representatives have defended the way the government deals with private media, many South Sudanese see the restrictions on local media as means to consolidate power. There is a cry for greater transparency in the way in which South Sudan is represented, positive or not:

This comes at a time when the warring factions have agreed to form a government of national unity, which South Sudanese and the international community hope will bring an end to violence. If the control over media continues to tighten, the peace South Sudan hopes to establish may be short-lived.