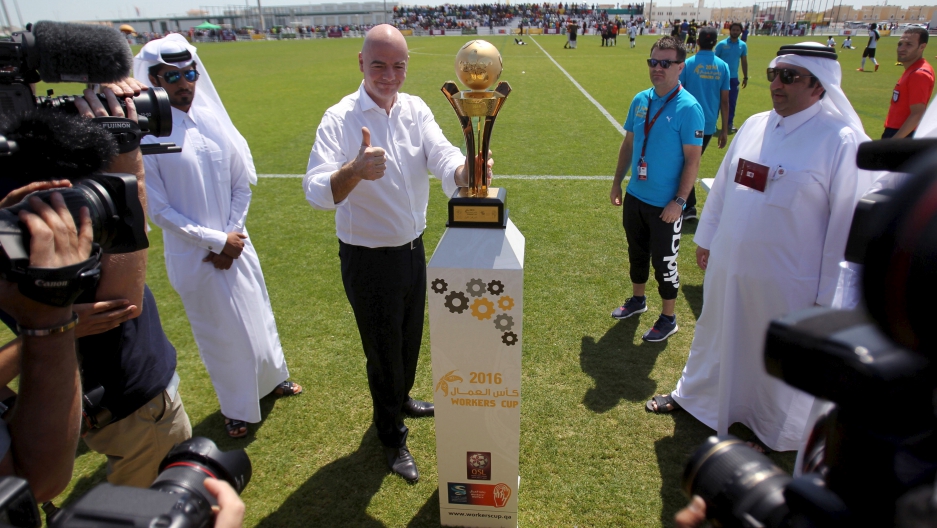 We’ve heard a lot in the news lately about the massive corruption problems at FIFA, the governing body of world soccer. A few high profile indictments issued by the US Justice Department will do that.

But FIFA has another big problem that deserves as much attention, if not more: human rights abuses linked to its tournaments and activities.

Exhibit A: the serious abuses suffered by construction workers in Qatar as they build venues for FIFA’s 2022 World Cup tournament. Many of those workers are migrant laborers, recruited from countries like Nepal and Bangladesh under a system that often leaves them at the mercy of their Qatari employers.

That often means low pay, or withheld wages, poor living conditions in crowded housing, and employers holding on to workers' passports so that they control whether laborers can leave. Some call that modern-day slavery. In recent years, hundreds of migrant workers have reportedly died in Qatar after being forced to work in unsafe conditions, though only some of those deaths are linked to the World Cup.

FIFA isn’t directly responsible for any of that. But its decision to award the 2022 World Cup to Qatar was controversial from the start, in part because Qatar was already known for this sort of exploitation of migrant laborers before it put in its bid to stage the tournament.

Because of that, FIFA has been severely criticized by human rights groups for essentially turning a blind eye to all of that. But the problem at FIFA goes beyond Qatar and the 2022 World Cup. It includes how FIFA selects the host nations for any of its tournaments. Until now, that’s been done with little regard for human rights factors or labor conditions at construction sites for venues. That was an issue two years ago, when a number of workers were killed in construction accidents during the rush to get stadiums ready for the 2014 World Cup in Brazil.

“In the past human rights have simply not been on [FIFA’s] agenda,” Harvard University professor John Ruggie said, “even though there are increasingly predictable adverse human rights effects of what FIFA does, either operationally through its own activities or through its relationships with contractors and others.”

Ruggie knows what he’s talking about. He teaches human rights and international affairs at Harvard’s Kennedy School of Government. And he’s the author of the United Nations Guiding Principles on Business and Human Rights.

To its credit, FIFA asked Ruggie to come up with recommendations for improving its handling of human rights issues. Ruggie has now published his independent report — and he didn’t pull any punches.

“First thing that had to be done was to include in the FIFA statutes, their constitution basically, a firm commitment to respect all internationally-recognized human rights. That’s been done,” said Ruggie.

But then comes the tough part. Ruggie wants FIFA “to incorporate into future bidding requirements explicit human rights criteria so that FIFA wouldn’t get into the situation that it’s in now in Qatar, where the construction of all the infrastructure is done by migrant workers, many of whom are subject essentially to forced labor.”

And when those requirements aren’t met, Ruggie’s report says FIFA must use all of its leverage to change that.

“Where FIFA is unable to reduce severe human rights impacts by using its leverage,” says the report, “it should consider suspending or terminating the relationship.” In other words, move the World Cup to another country.

Ruggie told us that FIFA is using its leverage right now in Qatar. “When the new president of FIFA [Gianni Infantino] was there last week, he announced the creation of an oversight committee — human rights organizations will be a part of it — to actually, on an ongoing basis, examine the situation of migrant workers as it relates to the 2022 World Cup. So that’s exercising leverage.”

If that fails, would Ruggie recommend that FIFA pull the 2022 World Cup out of Qatar? “That’s a difficult question,” he said. “What the report says [is] if you don’t have enough leverage to change things, and there is still time for you to consider terminating the relationship, maybe you should think about doing that.”

With the tournament in Qatar more than six years away, it would appear that FIFA still has plenty of time to consider such a move. Past experience suggests that's unlikely.